16 of the Most Incredible Rooftop Bars in the World 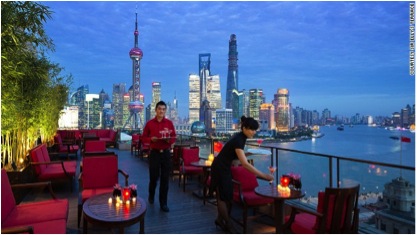 Yes, Durban does it again!!! According to CNN, good drinks and great views are a given at rooftop bars, however the Oyster Box Lighthouse Bar made it to the top 16 incredible rooftop bars list of the world and surpassed international expectations!
Just a few weeks ago, the Umhlanga Pier topped the CNN list of “most beautiful Piers in the world”. And recently Durban made the list again with this awesome accolade. We are so proud of our city, Durban and are thrilled that the rest of the world is acknowledging it for the gem that it is!
Here are the top 16 Rooftop Bars as featured on CNN.com:
1. Sir Elly’s Terrace, The Peninsula Shanghai
If you were to imagine a rooftop bar with gleaming skyline views, a glowing bar and more movers and shakers than a seaborne Yahtzee game, you probably wouldn’t be far off Shanghai’s standout rooftop drinkery.

With 270-degree views over the Huangpu River and The Bund, this establishment can’t guarantee the views you get in the photo above (there’s no such thing as a “smog forecast”), but it will promise good drinks, light snacks and the sense that, for an evening at least, the whole city is looking up to you.
2.Conservatory Lounge & Bar, Ararat Park Hyatt Moscow

Some of the best views of Moscow, with the Kremlin and the Bolshoi close by, can be found at this scenic terrace bar.
To get a table you’ll need to arrive early, but your efforts will be rewarded.
If it’s too cold, or you’re too late, there’s an indoor space with a glass wall so you can still see the view.
3. Vertigo and Moon Bar, Banyan Tree Bangkok

On the roof of Bangkok’s Banyan Tree Hotel, Vertigo specializes in barbecued seafood, though it also grills a mean steak and has a good vegetarian menu.
Walk a few steps and you’re at Moon Bar, which has a solid cocktail and wine menu and a small seating area.
The vertigo-inducing views (get it?) at this 61st floor venue are rivaled only by those at the Sky Bar at Sirocco, another of Bangkok’s drinking “high points” placed 63 floors up.
Many a fiery debate has occurred between die-hard fans of the two hotels over the years; we’ve gone with Vertigo because at two stories lower, you can get to the bar a few seconds quicker.
Drinkers also get seats, unlike at Sirocco, which since its appearance in “Hangover Part II” has become overbearingly popular.
4. Le Bain, The Standard (New York)

It’s got famous DJs, it’s got fake turf on the floor, in the summer it’s got a creperie outside and plunge pool inside …
oh and it’s got those views, an NYC vista you can gawk at from funky pastel-shaded chairs that seem to adapt to whatever shape is slouching into them.
The staff lend out binoculars to ensure gazing is 100% operational.
5. Coq D’Argent (London)

Don’t mind rubbing shoulders with hordes of pinstripe-suited bankers, and have the bank balance to match?
Located next to the Bank of England, St Paul’s Cathedral and Mansion House, the Coq D’Argent has a rooftop garden with lawns and ornamental box hedges.
There’s a pricey indoor restaurant, but a reasonably priced list of bar snacks.
You can sit on the grass or gaze down on the suits hurrying along the streets far below.
6. Sugar, East Hotel (Hong Kong)

It’s rare to find a high-octane cocktail bar with a killer view in the lesser-known parts of Hong Kong Island, and Sugar’s view contains fewer garish fluorescent billboards than you might expect in this neon mecca.
The scene is made up of ocean-going vessels floating in the harbor with a backdrop of the old airport, Kai Tak, now a cruise ship terminal.
It’s best to visit the lounge-y outdoor deck before sunset to enjoy the skyline by the soft light of dusk.
This way you can also avoid Sugar’s garish pink and purple lighting that takes over once it’s dark.
7. The 5th Floor, The Penz Hotel (Innsbruck, Austria)

The American Bar on the fifth floor of the glass cube in The Penz Hotel is good for an al fresco summertime drink or two.
It’s like a gentleman’s club, with leather sofas and smooth jazz, but one with views of the snow-capped Alps.
It has a retractable roof, but no heaters, so only the hardy venture onto the terrace after the autumn chill sets in
8. The Lighthouse Bar, The Oyster Box (Durban, South Africa)

Surprises are always best when they’re pleasant, even better when they’re awesome.
The Lighthouse Bar at Oyster Box Hotel in Durban falls into the latter category.
Sure, it’s a well regarded hotel with a great location, but were you ready for this?
With panoramic views of the Indian Ocean along Umhlanga Beach, this is a top spot for romantics, shutterbugs and those who just like to sit, sip and smile.
This bar is on the ninth floor of The Oyster Box hotel, which has its own oyster bed.
So if the views, fresh ocean air and cocktails fail to tug on your romance strings, you know what to order.
9. Sky Bar at KU DE TA, Marina Bay Sands (Singapore)

Marina Bay Sands is the only structure standing 200 meters high in its immediate vicinity.This means Sky Bar at KU DE TA has spectacular views into the city and over the waters and of Marina Bay Sands’ famous infinity pool.
Arrive at sunset to reap the full experience.
If you’re unable to tear yourself away from the fancy night lights, you can stave off hunger with some modern Asian dishes from the nearby KU DE TA Restaurant, while being impressed by the nightly laser show.
10. Spa Bar, Clarion Hotel Sign (Stockholm, Sweden)

Clarion Sign is the largest hotel in Stockholm — a stylish and minimalist granite and glass affair bursting with Scandinavian design classics.
The super-stylish Spa Bar is on the eighth floor and there’s a rooftop pool, too.
11. Two Rooms Grill Bar (Tokyo)

The terrace at this fine dining venue in the AO Building serves some of the best Sunday brunches in Tokyo and great cocktails.
The Bloody Mary is fiery and full of flavor — the secret’s in the sauce.
Two Rooms is proud of its in-house mix, which can also be sampled with vodka as an oyster shot.
Brunch is another a cocktail cornucopia.
Two Rooms runs late — offering classy nighttime views.
12. High Rooftop Lounge, Hotel Erwin (Los Angeles)

The surfboard decor in the lobby of the Hotel Erwin sets the tone for this elevated hideout in one of the most eclectic, gritty and downright mellow beach/surf/skate towns in the United States.
The payoff comes when you step off the elevator and walk onto the High Rooftop Lounge on the sixth floor — no high-rises in this part of L.A.
The 360-degree view commands everything from the storied beachside basketball courts of Venice Beach just below the bar to the storyboard hills of Hollywood behind it.
The expansive vista also includes some of the best public beach in Southern California, and prime sunset viewing.
The vibe is Stussy not stuffy — exactly the laid-back oasis you were hoping to find when you fought L.A.’s bitter highway wars to get to this timeless pocket of SoCal beach culture.
13. Skye Bar & Restaurant, Hotel Unique (Sao Paulo, Brazil)

Fashioned like an enormous boat, the Unique Hotel is just one example of Brazil’s adventurous architecture.
On the eighth floor is the rooftop Skye lounge, with many places to admire the Sao Paulo skyline.
It’s also a perfect spot to indulge in Brazil’s most famous cocktail, the caipirinha.
Come night, DJs entertain an international crowd.
14. Rooftop Lounge, Thompson Toronto Hotel (Toronto)

This Toronto stay is also a Toronto escape. The terrace that wraps all the way around the Rooftop Lounge bar gives views of Lake Ontario that whip you away from the city-feel in an instant.
Twist your head just a few inches, and you can see the CN Tower and all its chameleon color changes.
It can get cold — coats are recommended — or get there early to grab a spot by a heater. The lounge is open only to hotel guests and lounge members.
15. Cu-ba, Jumeirah Creekside Hotel (Dubai, UAE)

Cu-ba is one of the top spots for enjoying the glittering skyline of Dubai.
It serves a mean cocktail too.
It’s hard to remember you’re sitting above arid desert while flicking through the wine list, considering Cuban tapas, taking in the Latin atmosphere.
A chic nightclub is located inside, while couches offer a casual vibe beside the 25-meter pool outside.
16. Sky Bar, Cape Royale Hotel & Spa (Cape Town)

There aren’t many cities crunched between one of the world’s most photographed mountains and the ocean — so when you find one, it makes sense to head to its best rooftop bar for a sundowner.
This hotel-guest-only (and their guests) al fresco area was renovated in 2013, and overlooks the Greenpoint Stadium, Atlantic Ocean and Signal Hill.