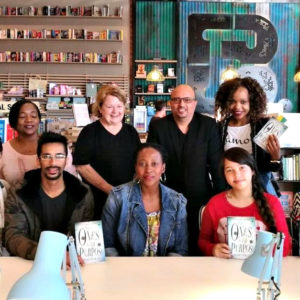 By I Love Durban
Awesome, Durban, Kids, Things to Do

Director of the Theology and Development programme in the School of Religion, Philosophy and Classics (SRPC) Dr Clint Le Bruyns is the brains behind the successful Dolphin Coast Book and Film Club. The Club was formed in 2017 and continues to grow its membership due to its unique position to connect people, start conversations, create lifelong friendships and truly commit to being a nation more responsible for the public good.

The Club started with four people who met on a weekly basis in Le Bruyns’ home. Less than 2 years later, the group comprises almost 400 members around the areas of Pietermaritzburg, Ballito, and Durban.

The Club boasts teenagers, retirees, students, and people from all walks of life who come together through a shared love of books and films. Due to its diversity, one of the Club’s key distinctive is what Le Bruyns continually refers to as its ‘convening power.’

‘The Club brings together, in one and the same space, the most unlikely suspects. These are undoubtedly people who would not be found in the same place together socialising in each other’s homes or seemingly have anything in common. And yet, here we are. Doing the most unlikely things with the most unlikely people in the most unlikely settings. And growing together with a sincere sense of connectedness or community, resulting in a number of special relationships and shared experiences and projects,’ said Le Bruyns.

A typical Club meeting involves discussing the chosen book or film for that week, sparking meaningful conversations that go on for hours on end. Le Bruyns says the Club isn’t interested in any New York Times bestselling books but instead are reading books by young, black writers throughout Africa.  ‘We need to listen to our own peers and youth who are contributing through fiction and non-fiction on the real lived experience among communities,’ he said.

Le Bruyns encourages people to join and do not assume the Club is some elitist intellectual group who unfailingly read entire books and engage in sophisticated book reviews.

‘We are an informal, relaxed, but thoughtful group of ordinary people committed to courageous conversations with one another, drawing mostly on the knowledge, values, and experiences of those in the room,’ he adds. ‘Among the ideas I have for the group is to include much more marginalised voices and contributions in times to come. The participation of children is a good example.’

Asked about how the Club fits into his community engagement at UKZN, he said, ‘The Club is just one apt case in point that as academics we do not, and we dare not, belong to ourselves. We owe our communities good scholarship. Show up in the everyday spaces of contested life, as part of your core work. And let’s start wrestling with the question of what it might mean to ‘decolonise community engagement’ with its inevitable call to disrupt how we are doing it and to do it differently.’

To find out what the club will be reading or watching next or to become a member, check out Dolphin Coast Book and Film Club via the community social groups’ platform https://www.meetup.com/Dolphin-Coast-Book-Clb-Meetup, which also includes a link to their Facebook Page. To join, contact Clint at lebruyns@ukzn.ac.za