The inaugural Artfluence Human Rights Festival presented by the Centre for Creative Arts at the University of Kwazulu-Natal will showcase and highlight the extraordinary work of human rights defenders in South Africa and on the continent – past and present – and the role of the arts and artists in promoting human rights today. Supported by the Embassy of the Netherlands, the inaugural festival will run for four days from Wednesday 5 May to Saturday 8 May 2021.

In celebrating the theme of the festival, “Voices of Hope, Courage & Resilience”, the Thursday night 6 May at 7 pm, turns to spotlight three incredible dance makers who are also human rights activists in the sphere of inclusive disability dance practice.

Curated by the CCA’s JOMBA! Artistic Director Lliane Loots, this platform will highlight three significant local and international dance makers who are working in a professional contemporary dance environment to mainstream the arguably decentred dancer and choreographer living and working with disability, and who are also – in their creative and visionary dance making – adopting measures to change attitudes and behaviours that marginalise persons with disabilities within the arts.

Choreographers featured are South Africa’s Nadine McKenzie from UNMUTE DANCE COMPANY in Cape Town, Ondiege Matthew from DANCE INTO SPACE working in Nairobi, Kenya and Adriaan Luteijn from INTRODANS based in Arnhem in The Netherlands. These three dance makers exemplify – through a long history of dance making – the theme of this year’s Artfluence Human Rights Festival “Voices of Hope, Courage & Resilience” in how their integrated dance practices celebrate – and often provoke – dignity and respect for all people equally.

A dance work by each of these choreographers is screened, and a robust discussion panel lead by Loots will follow. Dance works screening are “ACCESS DENIED” with concept and direction by Nadine Mckenzie and filmed by Themba Mbuli, “AGWATA” choreographed by Ondiege Matthew, and Adriaan Luteijn’s “CIRCULAR”. This is the first time these three ground-breaking new (short) works are screened in South Africa.

The inaugural Artfluence Human Rights Arts Festival focusing on arts, constitution, and democracy will be presented by the Centre for Creative Arts in partnership with the Embassy of the Netherlands. Voices of Hope, Courage and Resilience will be the theme for the inaugural festival. It will mark the 25th anniversary of the Centre for Creative Arts as a vibrantly creative enabler and advocate for social justice and democracy and the  25th anniversary of the adoption of the South African Constitution. The inaugural festival will run for four days, from Wednesday 5 May to Saturday 8 May 2021. The Freedom of Expression panel will be screening on Wednesday, 5 May at 5 pm. The festival is freely accessible and can be watched via www.facebook.com/artfluencefest and www.youtube.com/centreforcreativearts.

Note for the editor:

Mckenzie is a qualified integrated dance teacher, having received training at the ImpulsTanz International Workshop in Vienna 2010. She joined Remix Dance Company (2006). She has produced exceptional work as a performer on a wheelchair/teacher and has established herself as a well-recognised figure within the performing arts community both nationally and internationally. In 2013 she was nominated for Imbokodo Awards in Dance Category; she received a Tribute Award in the Arts and Culture category, and she was one of the Mail and Guardian Top 200 young South African Professionals. Mckenzie is the current Artistic Director and co-curator of the Unmute ArtsAbility Festival.

ONDIEGE is a dancer, choreographer, and DANCE INTO SPACE founder, a group of contemporary dancers, socially engaged performance artists, and the only mixed ability contemporary dance company in East Africa. Through exploring personal stories and employing participatory methods, the company under Ondiege creates touring productions, teaches dance, empowers people with different abilities, raises awareness on human rights issues, and strengthens self-advocacy. DANCE INTO SPACE works with other civil society members, creatives and government agencies, carries out civic education, constitutional education and human rights awareness among citizens in Kenya through the creative arts. As a leading contemporary dance choreographer as well as an activist, Ondiege has been using the mixed ability dance projects as a creative approach to inclusiveness since 2005. The projects address stigma while tackling punitive cultural practices that promote discrimination and basic human rights violations among people with disability. He continues to produce new and original works with his team.

If there’s one thing that Adriaan Luteijn definitely isn’t, it’s a standard choreographer. He doesn’t regard himself as a major innovator of dance language but more as someone who creates theatre with dancers. Luteijn enjoys ‘serendipities’, special opportunities that cross his path and that also inspire people with whom he creates choreographies for special occasions. These can be actors, urban dancers, older people, people with a physical and/or mental handicap, all of whom he places alongside professional dancers, and almost always with remarkable results. As the artistic manager of INTRODANS, Luteijn feels it’s important to build bridges. And in his view of things, dance is a superb, non-verbal way of doing that. In 1998 he ended his career as a dancer at INTRODANS. From this time on, he began to develop his choreographic activities for a diverse range of dancers and institutions in the Netherlands and abroad. Over the years, he has created various works for INTRODANS. One crucial element of Luteijn’s work with other target groups is formed by ‘De Ontmoeting’ (The Encounter).

ACCESS DENIED is a video presentation/film on three artists from Unmute Dance Theatre. The film is a documentation of the different challenges these artists face daily where issues of accessibility are concerned. The film stems from the many challenges we face as individuals in a society that overlooks persons with disabilities and their need to move around freely and at their independence without assistance from another. In a country such as South Africa that is in its 27th year of democracy, we are still faced with and denied the right to accessible buildings. Persons with hearing impairments are still faced with situations where people do not know how to communicate in sign language …

Recorded live on stage at Kenya National Theatre on 10 Dec 2020 in front of a select audience.

Persons with Disability suffer silently in ‘a triple jeopardy’ violence – gender violence, human rights violence, and discrimination/exclusion violence. The dependence – in Africa – on sorcery and black magic, brought about by beliefs and myths to try to cope with the occurrence of disability, is in itself a form of soft violence. AGWATA (the calabash) ritualistically demonstrates this soft violence meted upon PWD by a society that is oblivious of its discriminating actions that are often promoted by cultural myths and misconceptions. AGWATA proposes a demystification and dispelling of the myths surrounding disability (to spill the concoction in the calabash) in order to create an enabling environment where everyone has their rights respected and upheld.

Filmmaker Inge Theunissen completed, in collaboration with Adriaan Luteijn, the choreography with a pre- and sequel movie.

CIRCULAR, which Luteijn created in 2018, is an encounter between two INTRODANS dancers (Giuseppe Calabrese and Mathieu Di Scala) and Edwin van der Burg, a film-maker who is born with C.P. (cerebral palsy) and now spends large parts of the day in a wheelchair. Standing, walking, every simple movement costs him a lot of energy. “I have to concentrate on every movement, and that certainly applies to this choreography, too.” However, although Van der Burg walks with a swaying and rocking motion and his hands are bent inwards, Luteijn sees this not as a limitation but rather as a possibility: he takes this specific movement quality as the starting point for his choreography and has the two INTRODANS dancers respond to this. 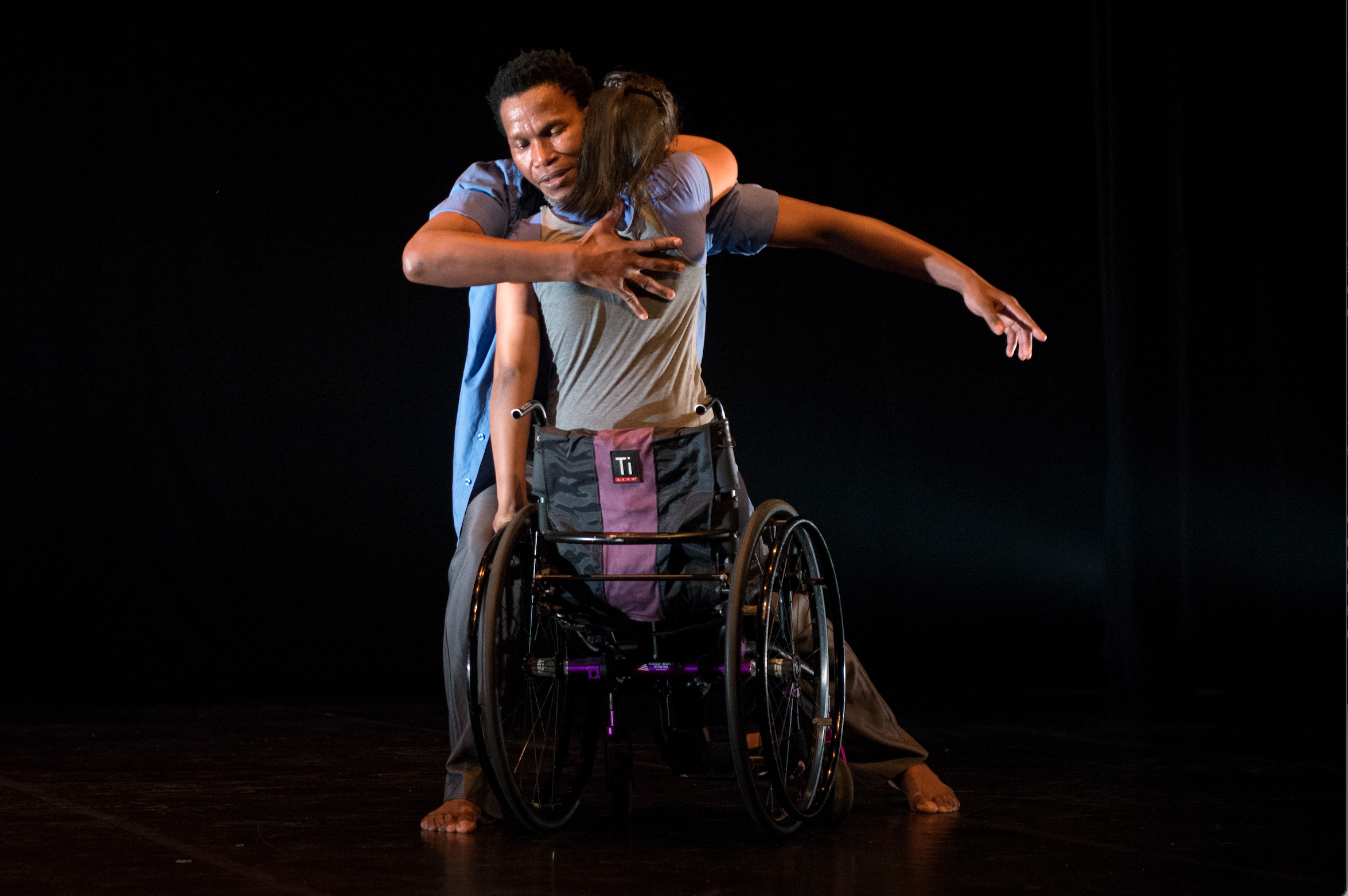 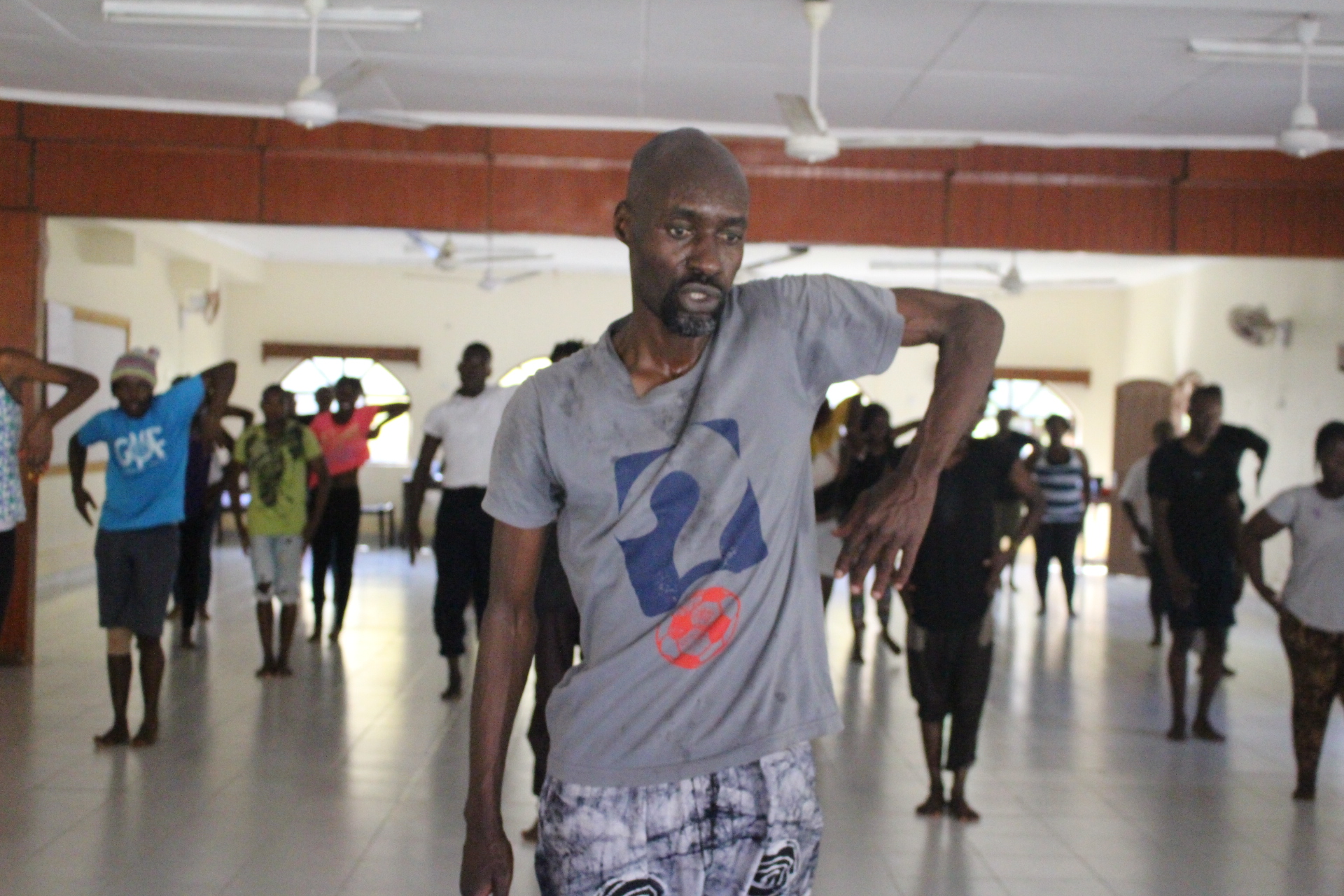