Chad is Worlds Number ONE!! 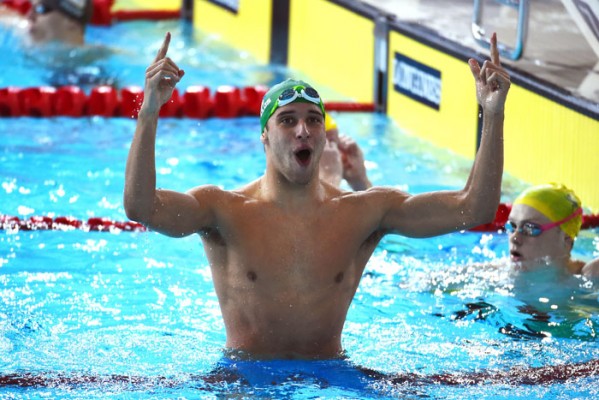 The South Africa’s swimming sensation Chad Le Clos, says he is proud and honoured to have become the best swimmer in the world, with his sights now set on maintaining those high standards.
The 22-year-old was greeted in Durban on Tuesday by a few hundred fans in the arrivals hall at the King Shaka International Airport following his return from the Fina World Short-Course Championship in Doha last week where he won a record four gold medals.
Le Clos made history on the final night at The Hamad Aquatic Centre in the Qatar capital, when he became the first swimmer to win the 50 metres, 100m and 200m butterfly events.
He also won the 200m freestyle earlier,, while victory in his specialist event saw him claim the biggest medal haul by an individual South African swimmer at the global showpiece.
Swimming legend Ryk Neethling was the previous record holder having won three gold medals at the 2006 edition in Shanghai.

“I believe now that I’ve cemented my spot as the best swimmer in the world and I can’t describe how proud that makes me,” Le Clos said.
“I just want to keep working hard and hopefully just inspire more youngsters to keep swimming and encourage South Africans to become a winning nation.”
The London 2012 Olympic gold medallist, who was named International Swimming Federation (Fina) Swimmer of the Year last week, was greeted by loud chants of “Chad, Chad, Chad” upon his arrival.
“These moments in my life never get any easier to comprehend and they will stay with me forever.
“It’s crazy to think a few years ago I was a kid and now I’ve risen to become the best swimmer in the world. I’m honoured and truly humbled.
“It has been incredible, just looking at this reception at the airport, it feels like London all over again.
“The past week has been probably the best Short Course I’ve experience, topping it off by winning awards.”

Earlier this year, Le Clos became the first man to be crowned Fina’s Swimming World Cup series winner for the third time, going unbeaten through the event and collecting 27 gold medals along the way.
“I’m really looking forward to some quiet time with my family,” he said.
“It’s been such a long year for me. Ever since I left for overseas in June, it’s pretty much been six months of non-stop travelling.”
Le Clos said championship was not only about his performances in the pool but the South African team as a whole.
“The team may not have won many other medals, but I think there were some exceptional performances, plenty of PBs (personal best times) and the future of South African swimming is bright.”
Chad will be back in action next week when he competes in the KwaZulu-Natal Provincial Championships in Durban.