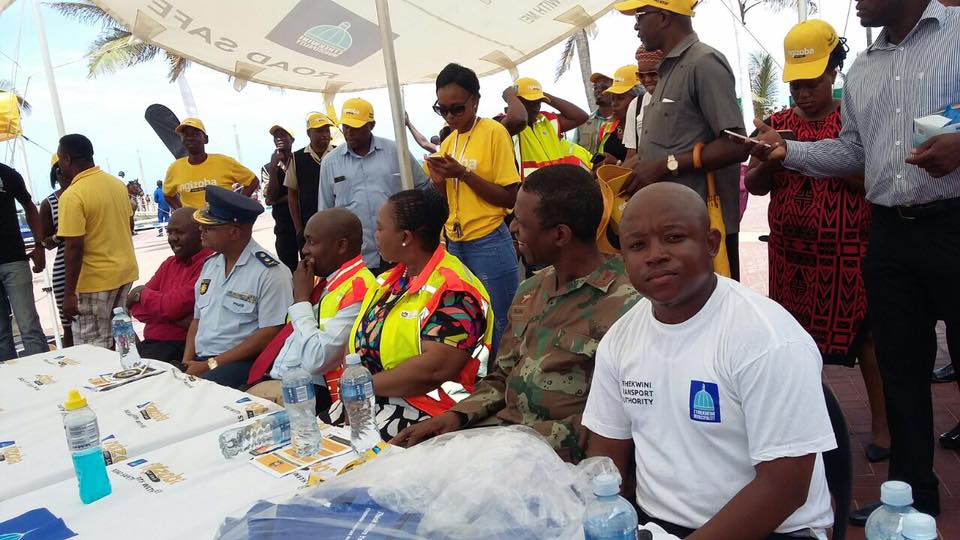 ETHEKWINI successfully launched the Ngizoba Road Safe Education Campaign today, 09 December, which encourages road users to make road safety a priority this festive season.
This campaign was officially launched with a Road Safety Walk from Suncoast Casino and ended with a beach activation at North Beach Fountain Court area near California Dreaming Restaurant. The campaign will continue to run in the open space next to the restaurant from 11h00 to 15h00 from Monday to Sunday until 2 January 2017, excluding Christmas Day.
This campaign aims to create road safety awareness amongst all road users including drivers, public transport commuters, passengers and pedestrians.
Mayor Zandile Gumede encouraged road users to exercise extreme caution while traveling on the road, obey speed limits and road rules.

“While road safety is an on-going campaign, it is intensified during the busy period because Durban is a tourist destination which usually sees an influx of visitors during the festive season,” she said.
For this campaign, the Municipality has adopted a slogan #NgizobaRoadSafe which means: “I commit to be road safety.” The three main objectives of this campaign are to reduce traffic accidents, road injuries and deaths.
During this campaign, road users are encouraged to pledge their support against texting, drinking and eating while driving. The campaign also seeks to discourage drivers from stopping at dangerous part of the roadway, applying make-up while driving, talking on the phone while driving and putting a child on your lap in the front seat. Drinking alcohol while walking on the road and wearing headphones while crossing the road are other dangerous practices that the campaign also aims to bring to an end.
We encourage road users to pledge to always wear a seat belt, to keep left and pass right, carry their driver’s licence, drive at the recommended speed limit, ensure that their vehicles are roadworthy, obey all road rules, always put children under the age of four in a baby car seat and only cross at a robot or pedestrian crossing.
During the campaign, road users will be engaged through various activities to heighten their road safety awareness. These activities accommodate people of all ages from children to senior residents.