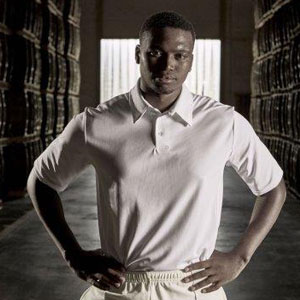 South African cricket sensation Lungisani “Lungi” Ngidi embodies the very essence of the saying, ‘success favours those willing to work hard for it.’

Growing up in Kloof, Durban, on the premises of Kloof Junior Primary School with his parents, a domestic worker and a member of the school’s maintenance staff at the time, Lungi was determined to follow in the footsteps of cricketing legend Makhaya Ntini.

“When I was seven, I was sitting on the embankment of the school’s cricket field watching a ‘Dads and Lads’ game when someone asked me to join in, setting in motion my career to date.”

Lungi’s dedication won him bursaries at Kloof Primary School, Highbury in Hillcrest, Hilton College, the University of Pretoria and a rightful place as part of the national cricket team.

“My journey started with humble beginnings. I don’t come from a place of wealth and that has become the motivation that I needed. As the breadwinner in my household it has been pushing me since the very first day to offer my family a better life.”

Lungi is featured in the third visual collaboration series by Three Ships Whisky, celebrating exceptional South Africans. He has crafted a future for himself despite many obstacles, and similar to the globally award-winning Three Ships Whisky, proved that circumstance is never the deciding factor of turning a dream into a reality.  View the video here (https://www.youtube.com/watch?v=owCB6Q9e6XU&feature=youtu.be)

“I’m not an overnight sensation and definitely not merely lucky.  Mastering theart of fast bowling was a slow and repetitive process. It’s about repeating the same action over and over, again and again. Talent can only take you so far, but hard work combined with talent can take you to the top.”

And this very sentiment is something Three Ships Master Distiller, Andy Watts, can relate to. A professional cricketer -turned-whisky maker might not have been a natural transition, however, Andy noted the opportunity. Through hard work and an uncompromising spirit of belief that South Africa can make the World’s Best whiskies, he set out to establish the South African whisky industry, with pride.

Lungi says representing South Africa has always been a dream.  “I still remember that very first day I played for South Africa when I was 15 years old. I was short of breath, my legs felt like jelly. It was an incredibly emotional moment for me. It still happens to this day – the goose bumps are still there! It really is a privilege to represent my country and I can only imagine how Andy felt when he won that first Global Award for the proudly South African whisky, when the world wasn’t even ready to accept us as a whisky-making country yet. It’s what we strive for when we excel at our profession – to be the best and not to allow our current environment determine where we are going in the future.”

Lungi says that winning is so much better when you’ve had a number of challenges to overcome to get there.

“It’s what makes us South African’s so unique. It’s what we are known for, it’s what we do. Quitting is never an option.”

In making whisky in South Africa, Andy too had to face many obstacles along the way. With no neighbouring distillery to ask for advice, and whisky requiring a minimum of three years in cask to be called a whisky, there wasn’t a lot of time to make mistakes.

However, he persevered and established many firsts for the South African Whisky industry, defying the odds that making whisky was reserved for only a select few countries. At Africa’s only commercial whisky distillery, The James Sedgwick Distillery in Wellington, Andy crafts whiskies that make South Africans proud and take centre stage at all the major international whisky competitions.

Lungi’s inspiring story brings the collaboration series of Three Ships Whisky featuring a number of inspirational and tenacious South Africans digitally, to life. The Made Exceptional. Made Here campaign visually portrays the story of Three Ships Whisky’s success coming from a country that in the traditional sense was never destined to make whisky and to celebrate those South Africans that with a sense of pride had the courage to do things differently.