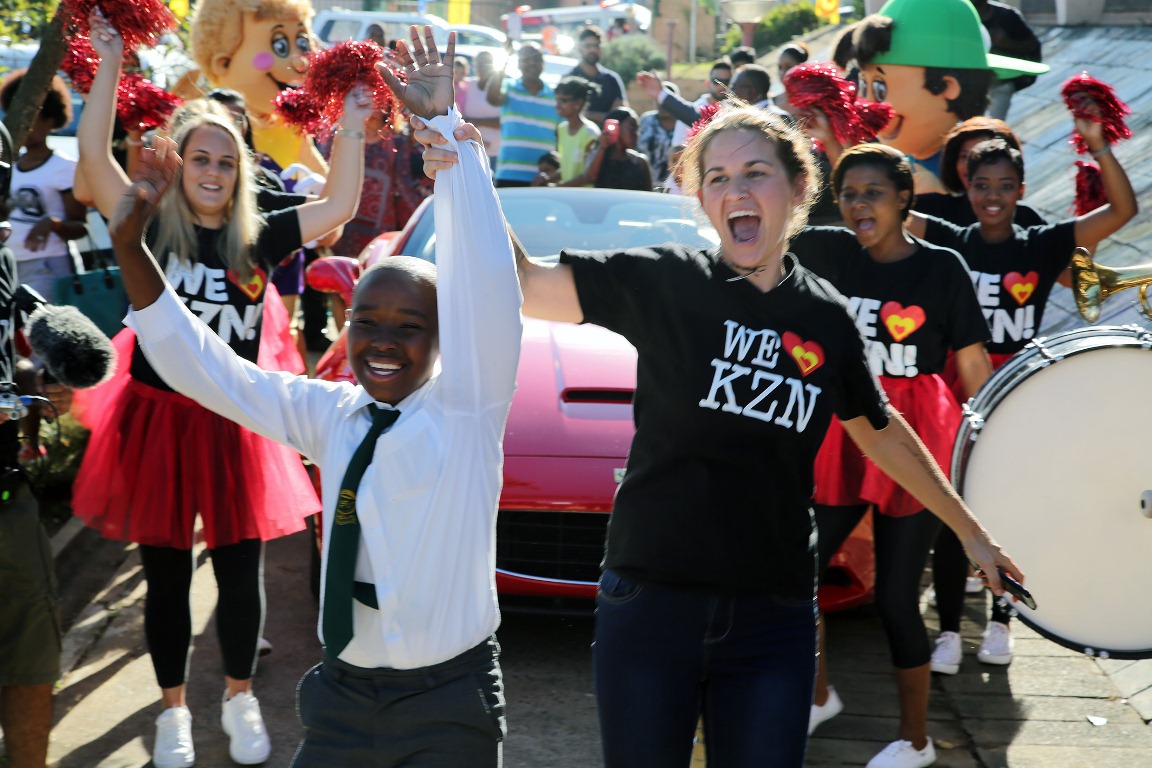 12-year old Olwethu’s dream ride to school in a Ferrari!
Pupils across KwaZulu-Natal headed back to school yestreday but one Durban learner turned heads by arriving in a chauffeur-driven, red-hot Ferrari! It was a dream come true for 12-year old Olwethu Zikhali who was treated like the superstar he is, after winning Freedom Stationery’s First Fab Day Back to School competition on East Coast Radio.
The Grade 6 pupil was fetched from his home in Phoenix by East Coast Breakfast presenter, Keri Miller, and arrived at Greenbury Primary School in a convoy of luxurious vehicles. A marching band and cheerleaders escorted the super-excited pupil onto the school grounds where he was interviewed on-air by East Coast Breakfast’s Darren Maule.
The team – Darren, Keri and Sky Tshabalala – broadcasted live from the school from 6am to 9am. Olwethu couldn’t contain his excitement when Darren and the Freedom Stationery’s Sales and Marketing Manager, Shiraz Hans, revealed that his 2017 school fees have been paid!

Olwethu entered the competition late last year, saying he would love to win to the grand prize because “I live with a single parent who cannot afford to pay school fees. My mum must also provide clothing and food so I’ll be happy if I could win.”
Freedom Stationery, Marlin and Marlin Kids teamed up to make Olwethu’s first day back at school a memorable one. As part of his prize, Olwethu also wins a Marlin backpack valued at R500 and a full set of school uniform. His classmates had lots to celebrate too, as each pupil received a stationery gift pack.
Speaking to Darren Maule on-air, Olwethu said it was the best day of his live and he will treasure this moment “forever”!