Durban is the Place to Be This Weekend!! 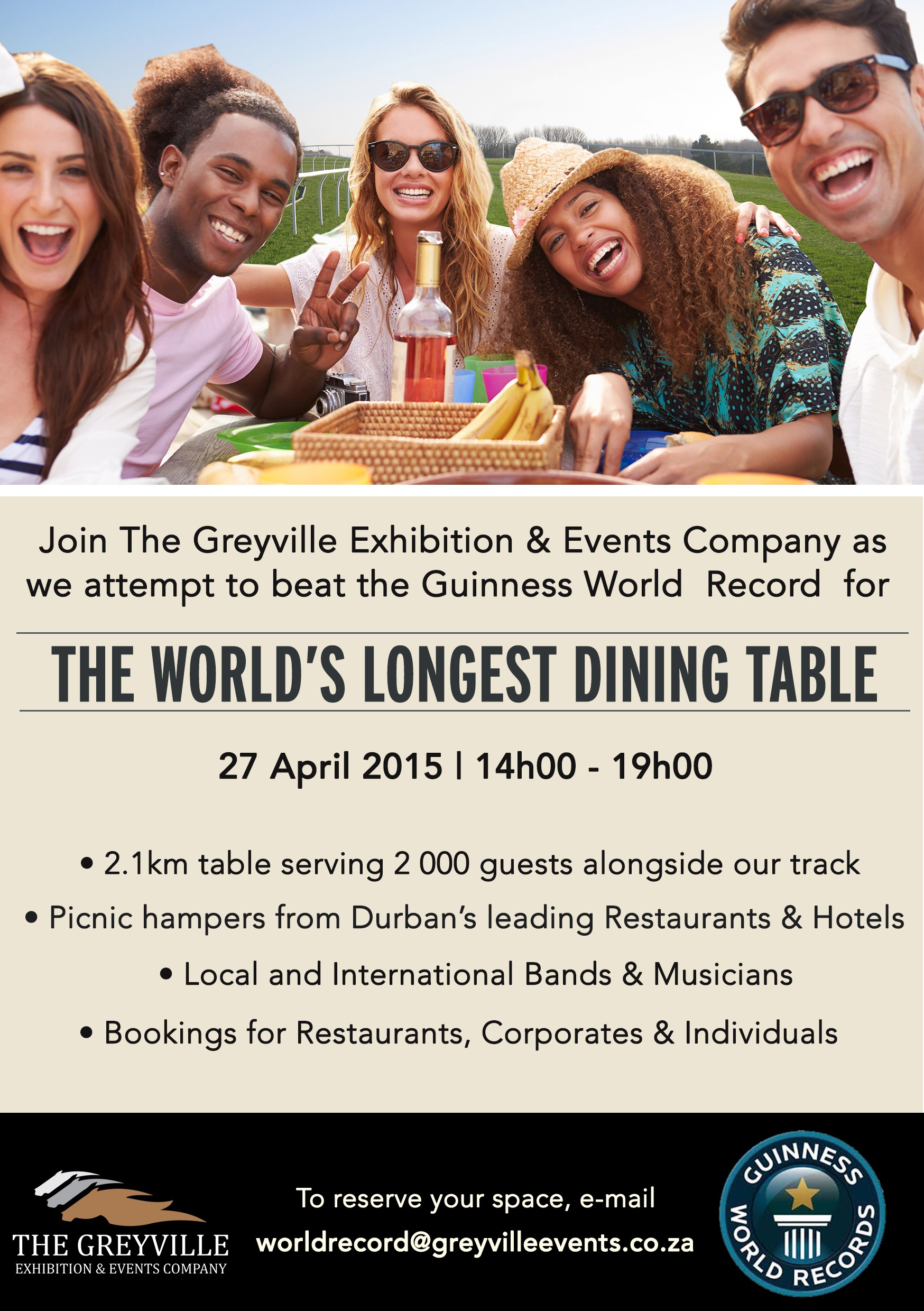 Get ready for a weekend of Food, Fun, Entertainment, Art, Theatre, Market and So Much More.

You can be a part of history as we attempt to beat the existing world record for the longest dining table in the world, at the Greyville Race Course in Durban on Monday, 27 April 2015.
The Guinness World Record attempt will include serving 2000 diners on the table and it will include the participation of Durban restaurants, hotels, corporate companies, tourism bodies, clubs and charitable organisations as well as private individuals and families wanting to be part of the record breaking attempt.
Enjoy Freedom Day with a full day of local kid’s entertainment, bands and musicians as well as delicious cuisine of the highest standards supplied by the renowned Eat Greek Catering Company. A number of well known Durban celebrities will be part of the event.

The Longest Dining Table in the World – Guinness Record Event

Mardi Gras is a massive festival celebrated all around the world.
It is seen as a time to have fun, to cut loose, to “throw down,” to “party till you drop,” to “let the good times roll.” The stage is set for one of the wildest and most fascinating extravaganza’s to be thrown this April in Durban at The Moses Mabhida Stadium, People’s Park East.
Colourful costumes. Spectacular decor & visuals. Elegant pageants. Masked balls. People dancing to rhythmic, intoxicating music. All with an air of carefree abandon. As the music reverberates, alcohol flows…Let the Mardi Gras take control of YOU! Confirmed performances by some of SA’s Best…Euphonik (5FM), Roger Goode (5FM), Ryan The DJ (5FM) & Dino Bravo alongside Durban’s Homegrown Heroes…Ameeth Shah, Warren G, Eighty6, Jit C Jitz, Cassie & Liam G, You are sure to be kept dancing all day & night!
Immerse yourself in a rich, extravagant musical sensation which will create a singular, unforgettable experience!!!

Once again South Africa’s liveliest whisky showcase, The FNB Whisky Live Festival, present their boutique tasting event, the Whisky Live Showroom, taking place this April at the Suncoast Casino in Durban.The world’s most awarded malt whisky, Glenfiddich, is set to take part in this event.
For this annual event, attendees will have the chance to sample the brand’s signature variant the Glenfiddich 12 Year Old, married and mellowed in oak marrying tuns for complete harmony of aroma and flavour.

The Glenfiddich 15 Year Old Solera, married in  unique hand-crafted Solera Vat, making it more complex and intriguing every year. The Glenfiddich 15 Year Old Distillery Edition, non-chill filtered expression at a higher strength, matured for 15 years in American and European oak casks. All tickets include a complimentary tasting glass, a 500ml bottle of Valpré Spring water and 15 tasting vouchers. The first 500 visitors through the doors in Durban each night will receive a free copy of the iconic whisky guide, the 2015 SA Whisky Handbook.
Venue: Suncoast Casino
Dates: 24/04/2015 to 25/04/2015
Times: 18:30 – 21:30

The amazing The Grand White event is returning in 2015 even bigger and better! With over 8000 guests attending in 2014 we are truly grateful for the fantastic support the event has received.

There is no goal except spending an extraordinary afternoon and evening together with friends and family — at a secret location chosen from one of each cities options dressed all in white with a touch of green! The Grand White will without a doubt become known as one of the most prestigious events once again in 2015.
During the afternoon and evening the guests will enjoy each other’s company, delicious food, live music, speeches, entertainment and much more with a new concept that promises an unforgettable event.
Guests are welcome to either bring their own picnic baskets or in the near future be able to purchase baskets online via our catering companies. Guests are given the option to either bring their own seating or purchase a ticket where seating is included.
Venue to be announced at 9am tomorrow
Prices from R240.00
Time: 3pm to 10pm
tickets at Nutickets.co.za

aQuelle TOUR DURBAN (105KM & 45KM):  Take in the sights of Durban as you race along the same popular route ridden over the past few years. The route will enjoy full road closure and provides riders with a challenging climb up the M7 to get the blood flowing before racing down the M19 and onto the M4 up the North Coast and then turning and heading for the finish at the magnificent Moses Mabhida Stadium.
aQuelle TOUR DURBAN MTB CHALLENGE (45KM & 20KM):  Starting and finishing at Gateway Theatre of Shopping you will enjoy a mix of mountain biking conditions that will provide you with a ride full of thrills and challenges to have you itching to come back again next year. The 20km course will provide a suitable challenge for those looking for a shorter distance or taking part in their first MTB race. Bring the whole family along for a great day of enjoyment for all.

One of the largest motorcycle events in South Africa, Africa Bike Week™ 2015, brought to you by Harley-Davidson®, will be taking place for the seventh consecutive year in the coastal town of Margate, KwaZulu-Natal, from 23 to 26 April (Thursday to Sunday).
The event is open to all Harley-Davidson® and other motorcycle riders and enthusiasts.
Entertainment will keep visitors rocking well into the night with some of South Africa’s most popular bands, DJ’s and personalities taking to the stage during the weekend. The lineup includes Just Jinjer, Dilana, Jack Parow, Rene Mabotha, Angie Khumalo, DJ Mixwell, Beyond Vocal, Loki, Monark, Clint & Co, Owen Kay, Taxi Violence, Georgia, FLO, Shadow Club and Saving Silence.
Venue: Margate, Durban, KZN
Dates: 23/04/2015 to 26/04/2015
Times: All Day

The Shongweni Farmers & Craft Market oozes with stereotypical country charm. It’s almost mandatory to pack up the family and dog, take a sturdy basket and arrive early.
Treat yourself with breakfast and, from your vantage point on a hay bale, decide your method of attack. Peruse stalls at a leisurely pace as hands-on producers passionately talk you through their wares from traditional English sausages to decadent baked goods, handcrafted organic cheeses, breads and rustic French staples like terrines and rillettes. You’ll also find Middle Eastern and Mediterranean specialities from baklava to falafel. If you’re shopping with a conscience you can buy organic veg or a pre-installed, irrigated system to grow your own organic vegetables.

As a fitting finale to the Celebration of 20 years of Freedom and Democracy in South Africa, the KwaZulu-Natal Department of Arts and Culture, in partnership with Awesome Africa Festival Productions, is set to host the Awesome Africa International Arts Festival featuring a host of world-renowned performers across a number of genres. The festival will take place over two days in different venues, kicking off with a Gala Concert at The Playhouse on Sunday, April 26 and followed by a full day at the Sibusisiwe Community Hall and Lovelife Centre in Mandeni, iLembe District on the North Coast on Monday, April 27.
For the Playhouse concert, doors open at 5pm and the concert begins at 6pm. Headlining the festival is the legendary Salif Keita from Mali, the “Golden Voice of Africa” whose place in the pantheon of African music has been well documented and revered. He performs with his dynamic 13 piece band from Dakar.
The award winning South African hip hop artist Khuli Chana in collaboration with MuzArt will also perform at both venues. Khuli is a multitalented musician well known for his ‘Motswako’ rap style which includes street-talk and highly influential messages in Setswana, English and other South African languages. MuzArt is a five piece musical collective that has collaborated with noteworthy musician. The group was nominated for South African Music Awards, Metro FM Music Awards and UK’s Soul Survivor Awards.
Venue: The Playhouse
Dates: 26/04/2015 to 27/04/2015
Times: 5pm

10. Market at the Square

12. Slip and Slide at Ushaka

Get down to Ushaka this Saturday Saturday, 25th April at Wet ‘n Wild for Craft Republic’s Pop-Up Bar! Come and enjoy the waterpark while sipping on an ice cold brew! Normal park rates apply.