Durban: Pics of the Blood Moon. 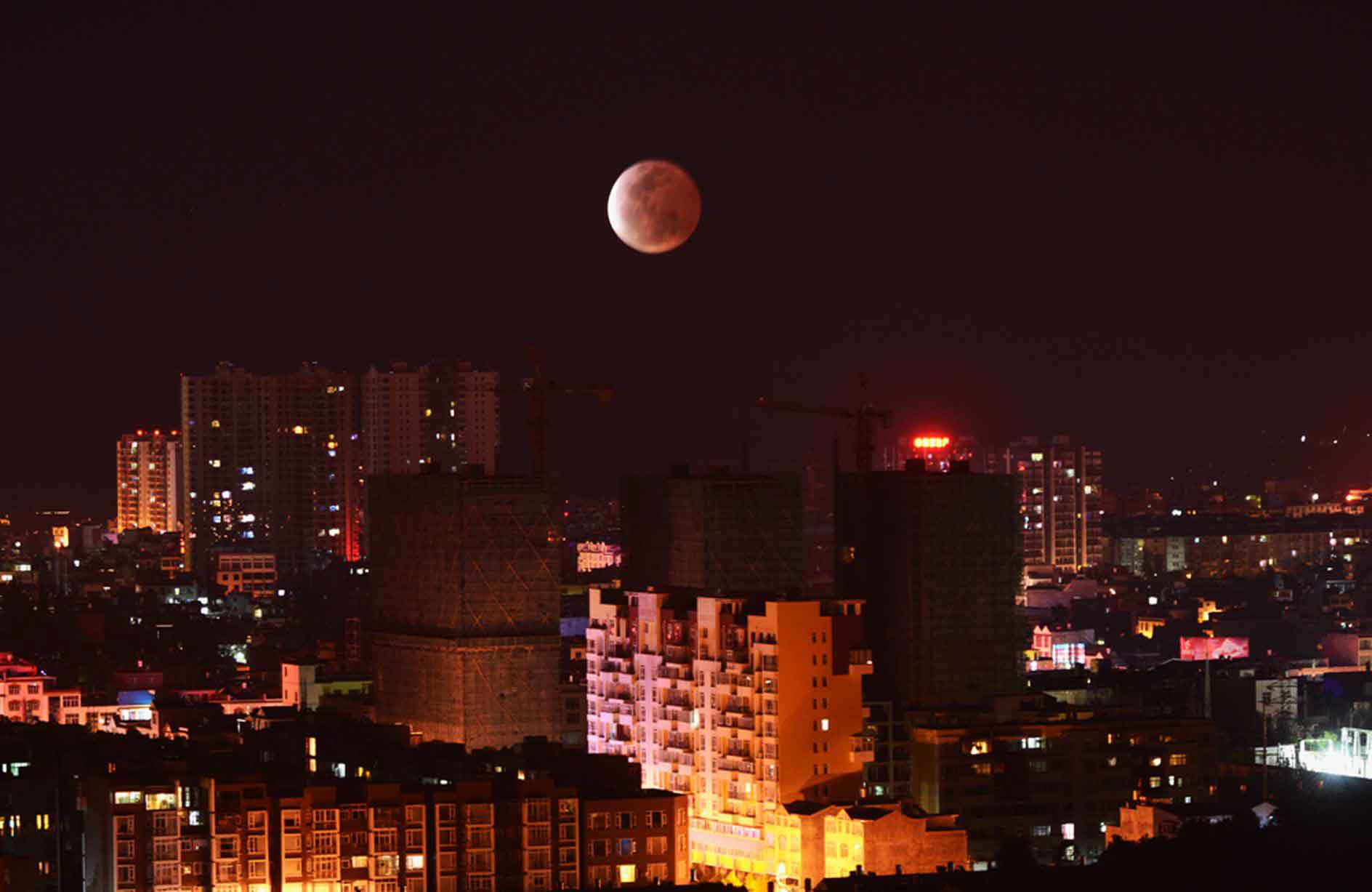 By I Love Durban
Awesome, History

11 Amazing Facts About the Blood Moon seen in Durban and all over the world!

If you are a fan of moon and stargazing then many of you would have had your alarm clocks set for 3am this morning. The Super moon was visible in Durban from last night but, during the early hours of this morning, it turned into an amazing brown almost reddish colour.
South Africa has experienced the extraordinary delight of a larger full moon, also known as a super moon as well as a lunar eclipse in the early hours of Monday.
The actual eclipse occurred at 03h00 on 28 September 2015. The rarity of the super moon and the actual eclipse occurring at the same time is unusual.
The term ‘super moon’ generally refers to a full moon which is at its nearest point to the earth.
This morning Durban experienced a total eclipse. This total eclipse is referred to as umbra, where it passes through the deep shadow of the earth. It is during that period that we see the moon turn a dark brown or orange colour and this is what is often called a Blood Moon.
Many of our fans and followers shared their pics with us on the I Love Durban Facebook, Instagram and Twitter accounts. Here are some of the awesome pics that were shared on I Love Durban and others we found on social media:

The Super moon in Durban  – Pic By Keanon Narrendes

Now there are many myths and legends behind the Blood moon but here are, 11 Amazing Facts about the Supermoon.
1. A Rare Eclipse of a Supermoon
The full Moon of September 27/28 is a Supermoon – the Moon will be closest to the Earth. or at its perigee, as it turns into a full Moon. A rising Super Full Moon can look larger and brighter to spectators on Earth. Total eclipses of Super Full Moons are rare. According to NASA, they have only occurred 5 times in the 1900s – in 1910, 1928, 1946, 1964 and 1982. After the September 27/ 28, 2015 Total Lunar Eclipse, a Supermoon eclipse will not happen again for another 18 years, until October 8, 2033.
2. People in the US Will Get Front Row Seats
People in eastern and central areas of the United States and Canada will have some of the best views of the Total Lunar Eclipse on the night of September 27, 2015, weather permitting. Here, the eclipse will begin after moonrise and finish around midnight (00:00 on September 28).
Those on the West Coast will miss the beginning stages of the eclipse because they will happen before moonrise.
It will be the last Total Lunar Eclipse visible from mainland USA until January 31, 2018.
3. Late Night & Early Morning Eclipse
While North and South Americans will be able to see the eclipse after sunset on September 27, 2015, people in Africa, Europe and Middle East can view it during the early hours of September 28, before the Sun rises.
4. No Need for Eye Protection
Lunar eclipses can be spectacular and they are easy to see with the naked eye. Unlike solar eclipses, which require protective eye wear, a lunar eclipse can be viewed without specialized eye wear.

Phases of the Blood moon

6. It’s Part of a Lunar Tetrad
The September 28, 2015 Total Lunar Eclipse is the fourth and final eclipse in a series of four total lunar eclipses called the lunar tetrad. The first three eclipses of the tetrad took place on April 15, 2014, October 8, 2014 and on April 4, 2015.
Notice something interesting about the dates? Each of the eclipses in the tetrad occurs about 6 months apart and have 5 full Moons between them!
Lunar tetrads can be rare in some centuries and can occur frequently in others. The 21st century will have 8 lunar tetrads, the maximum number of lunar tetrads that can occur in a century. The last time this happened was in the 9th century!
The next lunar tetrad of the 21st century will start with the April 25, 2032 Total Lunar Eclipse.
7. …And is Being Called a Blood Moon
In recent years, the term Blood Moon has been frequently used to refer to total lunar eclipses. Some sources suggest that the term stems from the Bible. Christian pastors Mark Blitz and John Hagee claim that the eclipses of the 2014-2015 lunar tetrad fulfill a Biblical prophecy of forthcoming difficult and trying times.
Astronomers do not use Blood Moon as a scientific term. However, it is possible that the term came to describe total lunar eclipses because of the reddish color the eclipsed Moon takes on during totality. This happens because of Rayleigh scattering, the same mechanism that causes colorful sunrises and sunsets.
8. Despite Rumors, the World Will Not End
The views of pastors Blitz and Hagee gathered attention in early 2014, because the eclipses in the tetrad coincide with important Jewish festivals. The eclipses in April 2014 and April 2015 occured at the same time as Passover, while the October 2014 and September 2015 eclipses occur during the Feast of Tabernacles. Some people took this coincidence as a sign of the end of times.
Others have dismissed any apocalyptic significance of the tetrad. Data of past eclipses show that at least eight lunar tetrads have coincided with Jewish holidays since the First Century.
The Jewish Calendar is a lunar calendar and Passover always occurs around a full Moon. Since a total lunar eclipse can only occur on a full Moon night, it is very likely that an eclipse will take place on or near Passover.
In conclusion, scientists and astronomers have found no reason to believe that the current lunar tetrad is a sign of the world to end. Even mainstream religious organizations have debunked this claim, so don’t start hoarding end-of-the-world supplies just yet!
9. It will Happen on Harvest Moon
The Lunar Eclipse on September 27/ 28, 2015 will occur during the Northern Hemisphere’s first fall (autumn) full Moon. Called the Harvest Moon in many northern cultures, it is the full Moon closest to the September Equinox, and is astronomically significant.
On average the Moon rises about 50 minutes later every successive day in a lunar month – the time period between two full Moons or two new Moons. In New York, for example, a new Moon will rise at 6:50 am on September 13. On September 14, the Moon will rise almost 60 minutes later at 7:46 am.
Around the Northern Hemisphere’s Harvest Moon, this time difference between two successive moonrises decreases to about 30-40 minutes for a few days. In New York, a full Moon will rise at 6:36 pm (18:36) on September 27 and on September 28, the Moon will rise 40 minutes later at 7:16 pm (19:16).
This curious phenomenon, which is also sometimes called the Harvest Moon Effect occurs because of the low angle that the Moon’s path around the Earth makes with the horizon during the northern fall (autumn) months. This effect reverses during the Northern Hemisphere spring. The large angle that the lunar orbit makes with the horizon ensures that the moon rises more than 50 minutes later every day around the northern Spring Equinox.
Because seasons in the Southern Hemisphere are opposite to the seasons in the North, the Harvest Moon Effect occurs around the southern Fall (Autumn) Equinox in March.
10. It is Part of Lunar Saros Series 137
Like solar eclipses, lunar eclipses tend to occur in 18 year long cycles called Saros cycles. Lunar eclipses separated by a Saros cycle share similar features, including time of the year and the distance of the Moon from the Earth. Eclipses that are separated by a Saros cycle are included in a Saros series.
The September 27/ 28, 2015 Lunar Eclipse belongs to Saros Series 137. It is the 28th eclipse and the last total lunar eclipse in a series of 81 lunar eclipses. The series began with a penumbral eclipse on December 17, 1564 and will end with another penumbral eclipse on April 20, 2953.
11. It’s the Last Eclipse of 2015
2015 has 4 eclipses, the minimum number of eclipses that can happen in a calendar year. The September 28 Total Lunar Eclipse marks the last eclipse of the year. It will be preceded by a partial solar eclipse on September 13, 2015. The first eclipse of the year, a total solar eclipse took place on March 20. Two weeks later, on April 4, 2015 the first lunar eclipse of 2015 took place.
Source: timeanddate.com