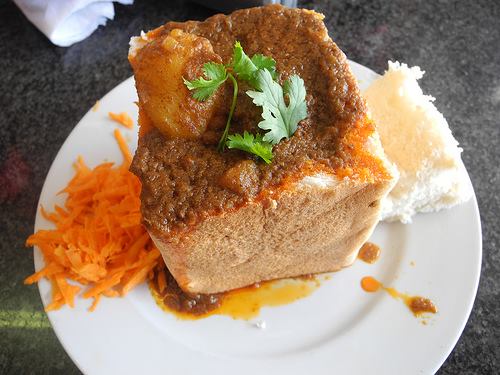 We found this great article on the “Top 10 Culinary Experiences in Durban” and thought that we would share it with you. Now whilst we agree that these definitely rank highly in the delectable delights of Durban there are a few that we would love to add – the traditional curry potjie, braaied or boiled mealies and definitely our spicy Pineapples!!
Durban cuisine and experiences certainly has its own unique flavour and style. Here is the awesome article that appeared on the national geographic website:
Bunny Chow

One bite and you’ll understand why, when ordering a “bunny,” it’s best to add “and a beer.” Durban’s ubiquitous street food starts innocently enough with a square loaf of soft, white bread. Then the middle is scooped out, replaced with lip-searing spicy curry (mutton, prawn, chicken, or vegetarian). It’s hot, messy, and impossible to eat without using both hands and lots of napkins. The beer is there to douse your tongue long enough to take a second bite. A quarter-loaf bunny is enough for lunch or a hearty snack. Two old-school Durban curry spots known for their bunnies are the Britannia Hotel and Goundens Restaurant and Take Away.
Fresh Sardines on Toast
Sometime between May and July (most years), swirling, silvery sardines by the millions migrate north along the KwaZulu-Natal coast following a cold ocean current. The Sardine Run, billed as “The Greatest Shoal on Earth,” launches a frenzy of fishing and feeding. Dolphin pods herd the sardines into tight packs, making it easy for seabirds, sharks, and seals to pursue and feast on the swimming buffet. Fishermen sell their shares of the haul at the fish markets on Wilson’s Wharf, where the waterfront pubs and restaurants also peddle fresh sardine dishes. Keep it simple and local by ordering a Durban favorite—fresh sardines on toast with onions.
Shisa Nyama

Translated literally, this Zulu term for barbecuing (“burn the meat”) doesn’t sound particularly appetizing. Forget the name and focus on the taste—tender, hot, and flavorful. South Africans love to barbecue, or braai, and if you aren’t invited over for some backyard braaiing, visit a local township shisa nyama, where you can choose your own boerewors (farmer’s sausage), steak, chops, or chicken, and carry it outside to the grill. Nembula’s in Empangeni and Max’s Lifestyle in Umlaziare are legendary hot spots, and not just for the flavorful meat. Accompanying the braai and cold beer are everything from weekend dance parties to complimentary car washes.
Bombay Crush

Pepto-Bismol pink and super sweet, South Asia’s traditional falooda is South Africa’s (in Durban, at least) Bombay Crush. The cool concoction is a frothy blend of rose-colored Rooh Afza syrup, milk, and tukmaria (basil) seeds topped with a couple of dollops of vanilla ice cream. Durban’s Indian Muslims traditionally drink the filling Crush during Ramadan, but the creamy shake is available any time of the year at most of the city’s curry restaurants. Look for the bright-pink drink on menus in the historic Indian district around Dr Yusuf Dadoo (Grey) and Bertha Mkhize (Victoria) Streets.
Food With a View
Since 1973, every dish at the Roma Revolving Restaurant has been served with a side of 360-degree city and harbor views. Totally renovated in 2009, the circular glass dining room is perched on the 32nd floor of the 358-foot John Ross House and completes one revolution every 60 to 90 minutes. Roma’s menu is nearly as expansive as the panorama: traditional Italian cuisine, locally sourced seafood, and specialty game entrees like crocodile and ostrich. After dinner, snag an outdoor table at rooftop Gino’s Sky Bar. On a clear night, stargaze above and watch the city lights reflecting off the Indian Ocean below.
Local Brews
The Western Cape is wine country, but in KwaZulu-Natal the libation of choice is locally brewed beer. Several commercial and craft breweries in the province are stops along Tourism KZN’s fledgling beer or brew route. Most offer public tours (advance reservations required), and some, like artisanal brewers Porcupine Quill Micro Brewery and Deli in the Valley of 1000 Hills and Durban’s Unity Brasserie and Bar, pair the house beer with light fare. Visit Porcupine for Karoo Red Ale and Unity for the signature Cowbell pilsner, or stop in at any pub to order a pint of Shongweni Brewery’s Robson’s Pale Ale or Robson’s East Coast Ale.
Tastes of India

Bunny chow is Durban’s most celebrated snack, but don’t let your gastronomical tour of the city’s Indian cuisine stop there. From casual curry dens to palatial waterfront restaurants, and from North Indian tandoori to Goan seafood specialties, there’s an Indian menu to fit every palate and price point. Along the Golden Mile, try Jaipur Palace in Durban North, Vintage India in Morningside, and The Jewel of India in the Southern Sun Elangeni Hotel. For an elegant North Indian dining experience, head north to Kashmir on the Dolphin Coast in Umhlanga.
Zulu Cuisine
Durban is the largest city in KwaZulu-Natal, the Zulu Kingdom, yet typical tourist itineraries rarely include sampling any Zulu cuisine. Some of the bigger resorts and casinos offer a multicourse prix-fixe menu of Zulu fare featuring traditional selections like mogodu (tripe), amadumbi (Zulu potatoes), and pap (hard maize porridge). More authentic Zulu foods are found outside of the city—west in the more rural sections of the Valley of 1000 Hills and north in Eshowe. Options range from “walkie-talkies” (boiled chicken feet) hawked at informal markets to the grilled crocodile steaks featured at pheZulu Safari Park’s Croctilians Restaurant.
Afternoon Tea

No matter how you spell it, Durban’s version of the Indian samosa is the appetizer of choice. The crispy, triangular-shaped pastries typically are stuffed with a spicy minced blend of chopped onions, chillies, and either lamb, fish, potato, or veggies. If you try only one, make it a Cape Malay sweet potato samoosa with chutney. A staple at most of the city’s Indian restaurants, samoosas are a true crossover item appearing on pub, casual, and fine-dining menus across Durban. One of the more decadent variations is at the Cargo Hold Restaurant, where the dessert cart includes a banana fudge samoosa paired with cheesecake and ice cream.
Which one of the Top 10 are your favourites?
Source: nationalgeogrpahic.com