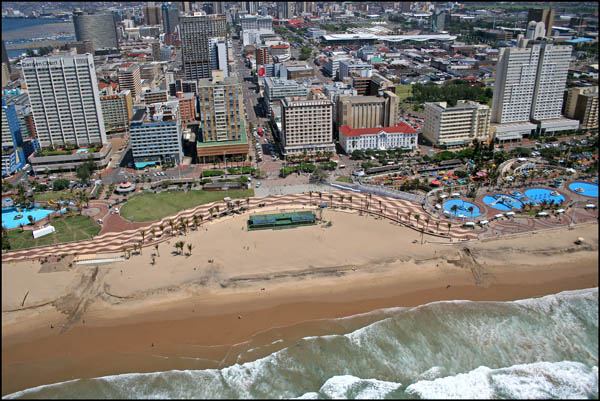 An Aerial View of Our Beautiful Promenade.

The Best Cities to Live in South Africa and the world.

The annual global Quality of Living Index by HR consulting firm Mercer has upheld Durban’s place as the south African city which offers the best quality of life.
According to Mecer, Durban ranks above the country’s traditional economic powerhouse of Johannesburg, and tourist mecca, Cape Town.
The ranking is considered one of the most comprehensive of its kind, and is put out annually to help multinational companies and other employers compensate employees fairly when placing them on international assignments.

The group looked at 450 cities across the world, and analysed them based on 10 categories that cover areas such as political stability, crime, banking services, medical facilities, quality of schools, infrastructure, entertainment and housing, among many others.
Durban was ranked 85th out of 230 cities – maintaining its rank for the third year in a row.
Durban’s higher ranking is mainly due to its high-quality housing, plentiful recreational offerings and good consumer goods availability. However, the city’s crime problems keep it from climbing higher on the list. Our city of Durban will host the Commonwealth Games in 2022.

Durban is the Host of the 2022 Commonwealth Games