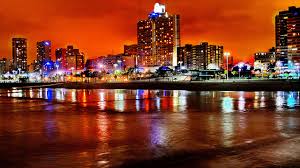 Durban has been thrust into the international spotlight!! We have been named one of the New7Wonders Cities. Yes, it’s time to celebrate.
The results of the global vote were announced in Dubai on last night and saw the seaside city join Beirut (Lebanon), Doha (Qatar), Havana (Cuba), Kuala Lumpur (Malaysia), La Paz (Bolivia) and Vigan (Philippines) as the world’s latest urban hot spots. This is definitely a feather in the cap for South Africa and our beautiful city Durban.
This is South Africa’s second New7Wonders nod, as Table Mountain in Cape Town was named a New7Wonders of Nature in 2011.
The New7Wonders Cities campaign, which was partially voted for by the public, confirmed on Sunday that Beirut, Doha, Durban, Havana, Kuala Lumpur, La Paz and Vigan are the seven “best” cities on the planet.
The result marks the end of a three-year campaign, which saw an initial long list of candidate cities whittled down to 28 by a panel of experts. An online, phone and SMS voting campaign was then conducted to find the seven top cities.
“I would like to thank everyone who have helped promote the New7Wonders Cities campaign since its inception in 2011,” said Bernard Weber, founder-president of New7Wonders.

Durban is one of the 7 Best Cities on the Planet

“We began with more than 1,200 nominees from 220 different countries and here have seven cities that represent the global diversity of urban society. For the first time in human history, more than half of our planet’s population lives in cities and this election emphasises the dramatically challenging character of our changing world.”
The New7Wonders Cities was created by Swiss-born filmmaker and explorer Bernard Weber, who has been on the hunt for the best new spots across the globe for years.

More than 100 million votes flooded in back in 2007 when he asked the world which seven wonders were the greatest. The Taj Mahal and the Great Wall of China were among the winners.
Then, in 2011, he did it all again, this time searching for natural wonders. Winners included Jeju Island in South Korea and the Amazon.
The result may come as a surprise to some. Notable omissions include key global cities like London, Paris, Tokyo and New York, and popular tourist cities such as Bangkok, Rio de Janiero, Rome and Barcelona.  Major countries like the US, UK, Australia, France and Germany failed to gain a single entry, as did the emerging BRIC nations of Brazil, Russia, India and China.

Instead, the final list contains broad range of cities, from the classical (Vigan and Havana) to the ultra-modern (Doha), as well as some less-visited national capitals like Beirut and La Paz. Kuala Lumpur triumphed over nearby Singapore, while Durban was selected ahead of Cape Town.New7Wonders Cities is the third global campaign from Zurich-based New7Wonders, following its New7Wonders of the World and New7Wonders of Nature initiatives.