Effects of the Supermoon 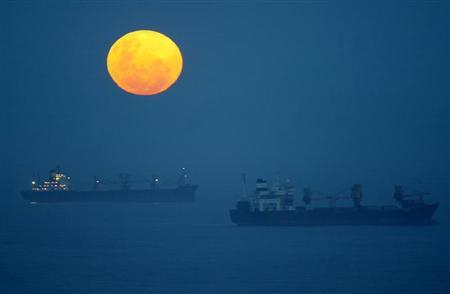 By I Love Durban
Awesome, Health

Durban, get ready for the Supermoon tonight!!

Ships lie at anchor outside the harbour at Durban, as a full moon rises.

PREPARE yourself for sleepless nights and unexplainable mood swings this week astrologists are warning, as the moon is due to reach its closest point to the earth.
The so-called “supermoon”, which will happen tonight, will see the moon appear much larger and brighter than usual.
Stargazers keeping an eye out over Durban will be able to see the moon look up to 16 per cent bigger, and 30 times brighter than usual during the rare event.
Supermoons usually occur every 13 months and 18 days, but there have already been two this summer, on July 12 and August 10 in an unusual twist.

On average during a supermoon, the moon is around 31,000 miles closer than when it is furthest away from the Earth.
It is known that full moons affect nature and in particularly the tides, but new research shows that these supermoons can have quite an effect on humans’ mood and sleep patterns.
Astrologists have long linked new moons and full moons with the changing of moods, but the unusually large supermoons could see these changes of mood and restless nights becoming more frequent in the days surrounding the event, according to new research.
In a study carried out in Sweden, participants were found to have around half an hour less sleep during the period surrounding a full moon, which then had a knock-on affect on mood.
According to astrologers, babies in particular are sensitive to the change in the lunar cycle and parents should be warned they could start to have restless nights from today.

It is a cultural ‘saying’ and even partially fact that full moons can induce lunacy.  Police departments and emergency rooms get more calls and visits on a full moon than any other day of the calendar month.  In some cultures it is considered a negative, or dangerous practice to stare at the moon unless you are spiritually ‘adept’ – or advanced – other wise the moon can cause imbalance in the mind.

The Indian yogic tradition explains the moon as influencing the subconscious mind, where the sun has more impact on the conscious mind.  During a full moon, subconscious thoughts and feelings are more likely to surface and if the content of those musings are not in alignment with ones normal conscious reality, it could manifest as  disturbing experiences.
The moon has a strong effect on our emotional nature and if you are already a sensitive person by nature, or have not learned how to detach from your emotions when necessary, full moons can be particularly vulnerable if not volatile.

Full Moon, Creativity and the Mind

Some say the full moon is an especially creative time.  According to the Spiritual Science Research Foundation subconscious tendencies, including creative inspiration, negative suppressed feelings or addictions can all surface during a full moon.

With this super full moon approaching, directly following the solstice, it seems like a great time to do some mental housekeeping and clear out any unwanted thoughts, emotions and habits.  At the same time, maybe writing a letter to someone you’ve been neglecting is in order.
Tonight’s supermoon is the last of 2014, and should see the biggest and brightest moon of 2014, as supermoons become even larger as winter approaches. The next supermoon is predicted on January 20. However you slice it, the moon is going to be bright – so get out there  under the light and enjoy it!