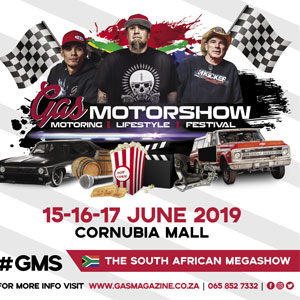 By I Love Durban
Durban, Entertainment, Event, Sport, Things to Do

SA fans have been dreaming to meet the racers from the hit US reality TV show series Street Outlaws, now they can spend three days with some of the stars heading to the Gas Motorshow in Umhlanga.

This year’s Gas Motorshow – taking place June 15 to 17 at Cornubia Mall – will be the biggest KZN has ever seen. The show exhibition will be set undercover on the size of five rugby fields (that’s 45,000 sqm) and loads more outdoor space for petrol-filled activities and entertainment.

Big news is that Farmtruck and AZN, two of Street Outlaws’ most-loved stars, will be joining Murda Nova over the three-day event to celebrate the launch of VP Racing fuels in South Africa.

Some of the best show cars in the country will be present, and there will be sights and sounds from every imaginable genre from SA’ vast car culture.

Three of SA’s cars which competed in the 2018 Haltech World Cup Finals in the US, will be featured, including Boetjie Budler’s fastest BMW in the world.

Well-known racer and tuner, Craig Czank, will have his only top-fueler drag race car in the country on display, along with Jacque Barnes’s VW Mk5 show car.

Ford’s extreme new Ranger Raptor bakkie will be there too, while the Sound Off competition will be a world record event with each result recorded on world rankings.

SA’s top women in motorsport like Karen Naidoo (KZN’s fastest female drag racer), Stacey-Lee May (best female spinner), and SA’s W-Series (world’s first female-only series) driver Tasmin Pepper – will share what it takes to be the best in their fields.

The show will include live cooking demonstrations at the Cooking with Gas stand, along with TV personalities, and chefs from Glow TV.

Dunlop Tyres are hosting a Grand Trek free event for visitors. Competitors will have to race a simulator, go-carts, complete a 4×4 track, and then change a wheel. All activities will be timed, with daily prizes for the fastest contestants.

Tickets are available at Computicket.