Friday Night – What To Do 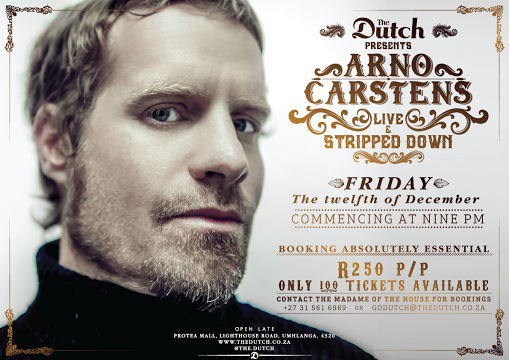 Friday Night Is Filled With Great Live Music And Exciting Things To Do. Check Out The Great Events To Attend Tonight!

Today marks the beginning for many of the festive period. Durban really is South Africa’s playground and with an almost long weekend ahead, there are some great gigs to get yourself to.

Arno Carstens At The Dutch

Arno Carstens At The Dutch

Durban’s most recent bastion for live, stripped down and mostly acoustic music out in the Umhlanga Rocks Village has landed two of South Africa’s most prolific performers in what is being billed as the ‘Double Whammy Weekend’ down at The Dutch. The first to kick off this awesome weekend of live music is Arno Carstens.
Arno Carstens, in town for the finals of X Factor, and is performing to a limited 100 ticket audience on the 12th of December at 9pm. Tickets are available from the Madame of the House:  031-561 6969 or godutch@thedutch.co.za

#RedEyeDurban is a multi-media art soaked night at a fresh new venue in Glenwood at Emoyeni House, 25 Haraldene Road. There will be six art-and-music rooms and two large balconies with beautiful views of Durban’s harbour. Emoyeni House is an old 1900’s Cubanesque, slash Victorian style villa. It’s one night of fashion, music and art!! Tickets are available at the door. They’re R100 and R50 for students. You don’t want to miss this!

Another one of our beloved Durban musos is back in town and starts his city tour this Friday night. He’ll be hitting venues across KZN and make sure you get to him. Besides being an incredible musician he’s one of the nicest people you’ll ever meet. On Friday night he’ll be at the Umhlanga Up market, Sunday he’s at Buds on the Bay and then he heads a little further north to Eshowe, Umzumbe and Salt Rock.

Christmas Market At the Square

Are you looking for handmade crafts, Christmas presents and Home made treats? Them you don’t want to miss this the
Night Market this Friday at Granada Square in Umhlanga from 6pm-10pm. Situated at 16 Chartwell Drive in Umhlanga, you can all expect Shopping, Live Music and Craft Beer. Don’t worry about the rain, they will be downstairs undercover!

This summer Soviet Denim presnts the Summer Wilderness Tour with December Streets, joined by Majozi, Black Math & Madrid as they take over Live The Venue. Originating form the capital of South Africa, Pretoria, DECEMBER STREETS is an indie rock band formed in late 2009. Over the past few years, the band has moulded their production into an explosion of their continual exploration of music to create a sound that captures their high energy, fun and soul with an added layer of depth. It amplifies their massive yet refined sound, with their signature catchy DECEMBER STREETS melodies always present.
The band released their debut EP simply entitled ‘EP’, during January 2011, featuring singles such as ‘My Name’, ‘Fire Through The Window’ and ‘Dance With Somebody’, whilst breaking the band onto the national radio charts with ‘My Name’ and ‘Fire Through The Window’ both charting on national and commercial radio, including 5FM.
Line-up For Tonight: December Streets, Majozi, Black Math and  Madrid
Starts at 8pm
Live The Venue – 166 Matthews Meyiwa Road

Music has been the mission of pianist Andile Yenana’s life since he was born in King William’s Town in the Eastern Cape in 1968. Andile’s career has involved a range of projects and collaborations that have taken him far beyond the conventional jazz small group. Andile will feature a number of amazing talent tonight including Sazi Dlamini on guitar and African indigenous percussions and Khaya Dlamini on saxophone. Bucco Bonginkosi Xaba on drums and Dalisu Ndlazi on bass will complete the elevation of the night into a virtuous outing for the real Jazz lover.
Venue: The Jazzy Rainbow – 93 Smiso Nkwanyana Road, Durban, 4001