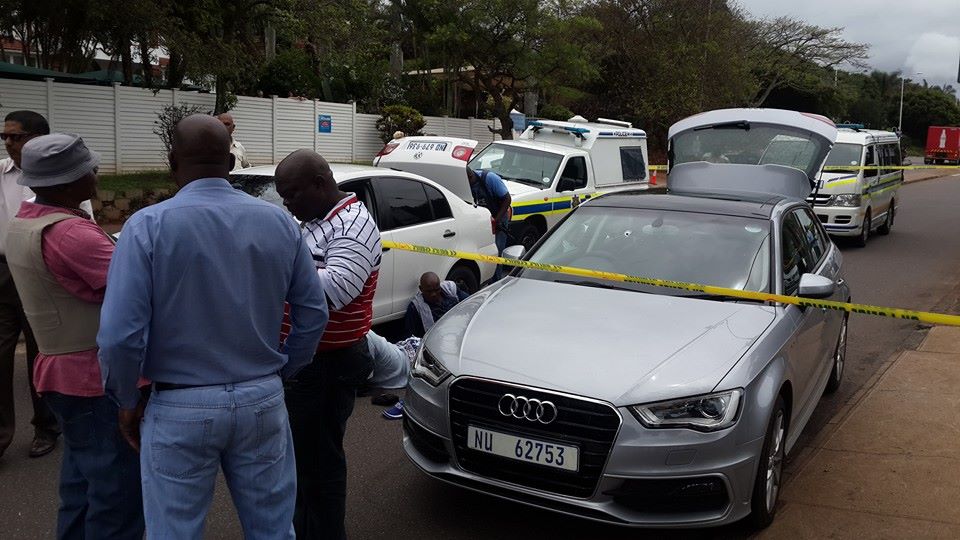 The quick thinking and alert vigilance by police officers on duty yesterday in Durban North saw two armed criminals apprehended after a shoot out ensued when police gave chase to a suspicious looking vehicle. Police spokesman Jay Naicker said officers were busy with normal crime-prevention duties in Beachway when they noticed a suspicious silver Audi A3. When they approached the vehicle, it sped off.
The Audi was moving along Beachway towards Kenneth Kaunda Drive when the chase started. When the suspects started shooting, the policemen drove beside them and returned fire injuring the two occupants in the front.

The Silver Audi Involved In The Shootout (picture sourced from Facebook)

Naicker said, “The police gave chase and these three guys continued driving, going through red traffic lights. They eventually opened fire on the officers, who returned fire and stopped the vehicle. They arrested two suspects and recovered two illegal firearms.” One of the suspects managed to escape, hijacking a woman with the car later being found abandoned in KawMashu.

The two suspects that have been arrested have been charged with attempted murder and possession of illegal firearms. “We cannot rule out the possibility that they were about to commit a crime. We don’t know where they were going,” Naicker said. Other charges cannot be made unless there is proof of crimes committed. The silver Audi that was being driven was not reported stolen, so charges cannot be made on a stolen car.

The third suspect that escaped was seated in the back seat of the Audi. He then jumped over the fence of a property and hijacked a woman that had just parked her car. She had just gotten out of the car when she was dragged to the tarmac. The suspect then jumped into her car and rammed the gate open trying to escape.
The video of this has since been posted on various social medias and has gone viral. The video can be watched here.


Haden Searles, chairman of The Durban North Community Policing Forum said it was an ominous warning for crime during the festive season.
“Everyone needs to be super, super-vigilant and aware. Criminals are becoming braver and braver. If they start shooting at the police, you must know that you’re dealing with guys who are desperate not to be caught,” he said. He also commended the “phenomenal” vigilance and response of the police.
*information sourced from www.iol.co.za