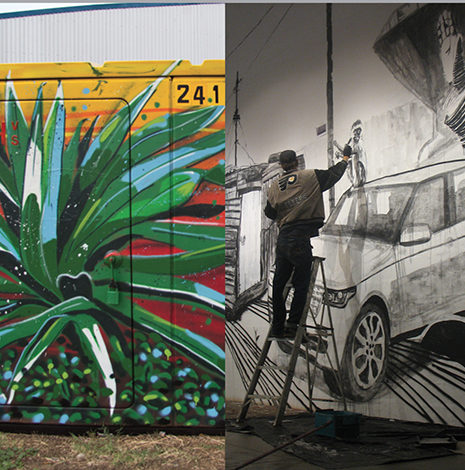 By I Love Durban
Art, Awesome, Durban, Things to Do

The KZNSA Gallery welcomes all to a special Holiday Sessions: Street art with Mook Lion, Kev7 and Sphephelo Mnguni. Be part of a 3 day street art course, starting tomorrow, Wednesday 4 July through to Friday 6 July from 09h00 to 12h00 daily.
How to book:
Call or email the gallery to book your place – 031 2771705 | gallery@kznsagallery.co.za
R500 for all 3 workshops- materials and refreshments provided
09h00 – 12h00
Children from ages 6+ welcome
More about the artists:
Mook Lion
Mook Lion is awaiting graduation for his Masters in fine art at the Durban University of Technology. He investigated street art and mural art as visual activism in Durban: 2014-2017. His practice based study aimed at producing site specific and socially conscious artwork in the public domain.  Theoretical and historical research as well as primary information gathered through interviews with members of the public, informs his art practice.

Mook Lion became invested in this form of cultural expression through participating in Hip Hop culture in Durban from the mid- 2000s focusing on graffiti. Through this culture he developed an interest in exploring and actively participating in Durban, his city of residence. He was charged for malicious damage to property on two occasions as a result of this active often unsanctioned use of public space through graffiti. Through institutional education at Durban University of technology he began attempting to combine academic fine art and graffiti which lead him to this area of interest. Currently, he often works collaboratively with experienced artists and community members, aiming to make art which performs a social and cultural function by beautifying or repurposing wasted space and communicating with the public around social injustices and the importance of nature preservation.

Kev Seven
Kevin Ngwenya aka Kev Seven, is a Durban graffiti and mural artist who lives and works in Durban.
He attended Nanda Sooben’s school of Fine Art, Animation & Design where his work began to take shape through the artist’s fascination with comic book illustrations and love for the architectural textures of his city. After graduating with an Integrated Fine- Art & Design Diploma, he then pursued a Bachelor of Arts Degree at The University of Kwa-Zulu Natal in 2013 and majored in English, Media, Cultural Studies and Music. This combination in education created a symbiotic relationship between public arts, design, and its impact and influence on modern pop-culture media and society which would become the core subject of his work.
Ngwenya’s influences stem from the New York subway and street art movements in the early 1980’s. He sources inspiration from his everyday encounters navigating within his city, conversing with its people, and paying homage to his childhood cultural icons, which play a vital role in his artistic and creative upbringing.
His work has appeared in numerous publications, exhibitions, and brand partnerships throughout the years.

Born in the 90s (19th of December), in Durban, South Africa.
Sphephelo Mnguni is a fine artist, musician, and a street artist from Durban South Africa. He’s currently (2016) studying towards his B Tech degree in Fine Art at the Durban University of Technology. He has been a professional artist since 2010 and has been involve in numerous exhibitions locally and abroad since then.
Sphephelo’s work is being described by many as contemporary, conceptual, and socio-political. His visual practice (interest) is an analysis/commentary on post-apartheid, post-colonial contemporary South African setting.As a young, black, contemporary artist. Mnguni’s work sets out to; interrogate the socio-political conditions of post-apartheid South Africa and more specifically the nuanced city of Durban.