IBV and Durban are about to Make History! 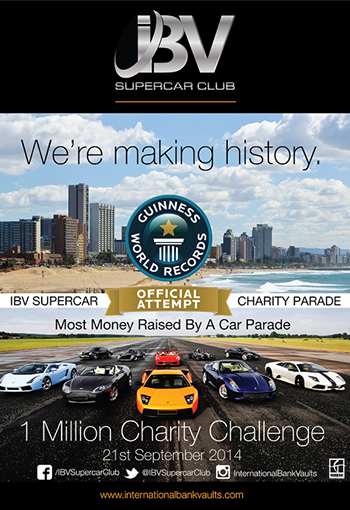 By I Love Durban
Awesome, Business, Cars, Entertainment, News, Things to Do

Durban Get Ready for a World Guinness Record attempt like no other!

It is not every day that the wealthy use their time and supercars to help a needy child and break world records too!  The IBV Supercar Club is attempting a Guinness World Record supercar parade in Durban on Sunday, 21 September 2014 and if you own a super car, classic car, muscle car or an exotic, join us in making History!
The  IBV Supercar Club aims to break a Guinness World Record by raising R1 million through a charity parade of 200 supercars down North Beach. Each supercar owner will be accompanied by an orphaned child who will be given an experience of a lifetime.

CEO of IBV, Ashok Sewnarain said, “This world record breaking attempt  is part of our ongoing initiatives at IBV Humanity. All our businesses work closely with IBV Humanity in helping make a significant difference in the world. I am particularly excited about the IBV Supercar R1 million Charity Challenge as it is a Global attempt at doing something innovative, something that has never been done before.”
Guinness World Records events are used by a wealth of organisations and associations to disseminate awareness and communicate good causes. This  Guinness World Records attempt will not only convey a very important message message but also raise awareness on social issues.
“We are calling all supercar owners to join us at 7am at the Pavillion Hotel for this ground-breaking event by donating their time and a gift of a ride in their supercar to an orphaned child” invites Marc Rosseau, Manager of IBV Supercar Club, a distinguished supercar club in South Africa.

There are about 3.7 million orphans in South Africa and about 150 000 children are  living in child-headed households. There is nothing more excruciating for a child than to lose a parent, not to mention losing access to social grants, education and healthcare. Added to this is the loss of adult guidance and protection.
Children without appropriate adult care are more likely to be abused and exploited. Many orphans and slip further into poverty once the family’s main breadwinner dies. South Africa’s ultra-rich are often criticized for their overtly ostentatious lifestyles. This is a chance for those who have, to give to those in need.
Nedbank released a report which divulges that nine out of ten of South Africa’s high-net-worth individuals give away some of their money, time or goods. The report looked at individuals who earn more than R1.5-million a year or have R5-million worth of investible assets. South Africa has about 300 000 of these individuals. So it is evident that South Africa’s High Net Worth Individuals care about the social responsibility issues.

“Corporate Social Investment is very important to us. We fully support IBV’s vision to host 200 orphaned and under privileged children. As corporates it is our responsibility to stabilize the social and economic environment and we will continue to make an effort to improve the living conditions of the communities in which we operate,” Akash Maharaj, Centre Manager at Gateway Theatre of Shopping.
All money raised from the event will benefit IBV Children’s VIP Day, The Sunflower Fund, UNICEF and Child Welfare South Africa. Donations will be audited by Guiness World Records & proceeds by Ernst & Young.

Invitation to Be a Part of History

In the wise words of Nelson Mandela “Overcoming poverty is not a task of charity, it is an act of justice. Like Slavery and Apartheid, poverty is not natural. It is man-made and it can be overcome and eradicated by the actions of human beings. Sometimes it falls on a generation to be great. YOU can be that great generation. Let your greatness blossom.” The IBV Supercar R1 million Charity Challenge parade will be escorted by Harley Davidson & Ducati Bikers, and led by a helicopter formation and special police escort.
We need your support, for more information please contact Marc Rosseau on 073 852 5340 or visit www.ibvsuperclub.com