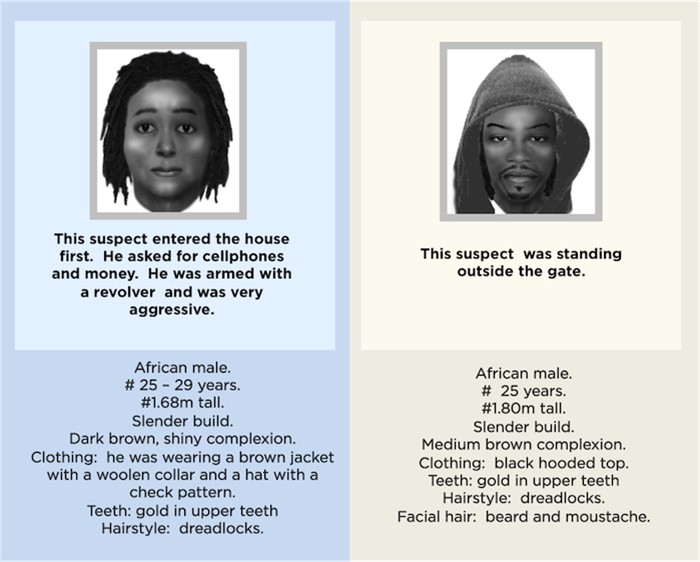 The South African Police Service has revealed Identikits of two of the suspects believed to be involved in the killing of Bafana Bafana captain Senzo Meyiwa.

The Orlando Pirates captain was gunned down in Vosloorus on Sunday evening, and the police have put up a R250 000 reward for any information leading to an arrest.
It has also been confirmed by Pirates today chairman, Irvin Khoza, after he met with the Meyiwa family in Umlazi yesterday, that Senzo Meyiwa will be buried on Saturday November 1, at Umlazi, Durban.

The SAPS tweeted: “Suspect A in #SenzoMeyiwa murder case facial composition, he entered the house 1st.
“Suspect B in #SenzoMeyiwa murder case, he was standing outside gate”
SAPS spokesman Brigadier Neville Malila reportedly said that the men are believed to be between the ages of 25 and 29.
National police commissioner Riah Phiyega announced on Monday that she had set up a multi-disciplinary task team made up of forensic, crime intelligence, and visible policing members to handle the murder case.
A R250 000 reward was being offered for information that could lead to the arrest and conviction of the killers.
Crime intelligence is looking for the cellphone stolen from the house.
The identikits were reportedly compiled after officers spoke to Khumalo and other witnesses who were in the house when Meyiwa was killed.
In the identikits, the first suspect is described as having a slender build with high cheekbones. He has dreadlocks and gold in his upper teeth.
He was wearing a brown jacket with a woollen collar and a hat with a checked pattern at the time of the murder.

The second suspect has been described as having a medium brown complexion with dreadlocks and a beard and moustache.
He was wearing a black hooded top at the time of the murder.
According to reports, Meyiwa’s family are to hire the services of private investigators to assist the police investigation. Hopefully sharing of the identikits on social media platforms will help in apprehending the suspects.
* Anyone with information can call 0800 10111 or SMS our crime line on 32211.