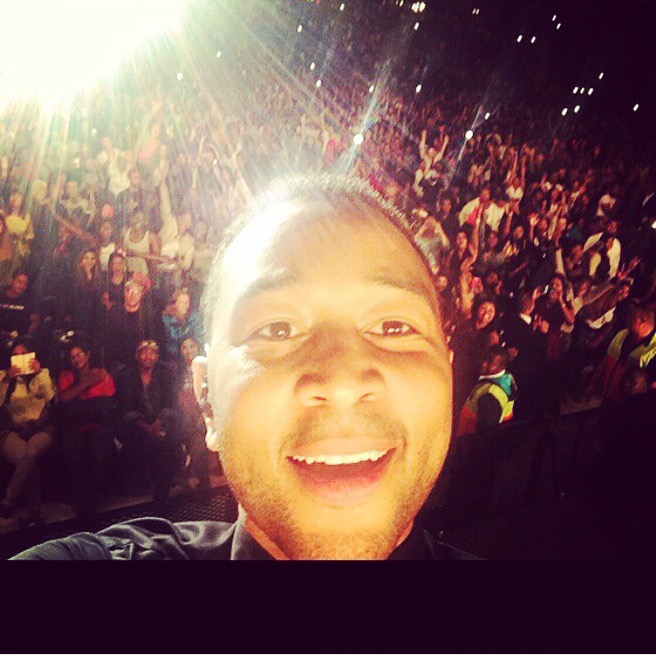 John Legend Thinks That The Night He Spent Performing In Durban Was “Incredible” Durban You Were Awesome!!

Last night over 16 000 people packed the Moses Mabhida Stadium to capacity to watch the legendary John Legend perform his Durban leg of his international “All Of Me” tour. Fans are still expressing their delight via social networks about the concert and how amazing his performance was. The concert, which sold out in 6 days had many counting down the minutes in which they would watch him perform.

The post of  John Legend’s selfie on Instagram and our stadium has already reached over 20 000 likes and counting!!!
Durban is well known to have a rainstorm on big concert days, and even though yesterday looked like it could have a downpour during the concert, the rains stayed away and the weather was fantastic throughout the show. Lira, one of South Africa’s most successful music artists was the opening act for John Legend. Her silky voice and smooth tunes were the ideal sounds to get Durban ready for his show.

What Did John Legend Think Of Durban?

John Legend, who has been touring South Africa, has already performed in Cape Town and Joburg. He will be returning to Joburg today for his final performance in South Africa at the Coca Cola dome. Fans following the star on Instagram would have seen that he did a Safari tour at the Kruger National Park with wife Chrissy Teigen before heading to Durban. Excited to have seen some of the wildlife, he then jetted into Durban and to the Beverly Hills, which hosted him for the night.

An Incredible Performance By John Legend

During the concert he said to the crowd that Durban is awesome and that he couldn’t wait to get here. He took a moment in his performance to take a selfie with the crowd in the background. He later loaded it onto his Instagram account with the caption “Wow Durban!!! Tonight was incredible!!! Thank you!!! #AllOfMeTourSA”

But First, Let’s Take a Selfie

Thank you John Legend!! We think you were pretty incredible to! Well done to you and well done to Durban for being such an amazing crowd.