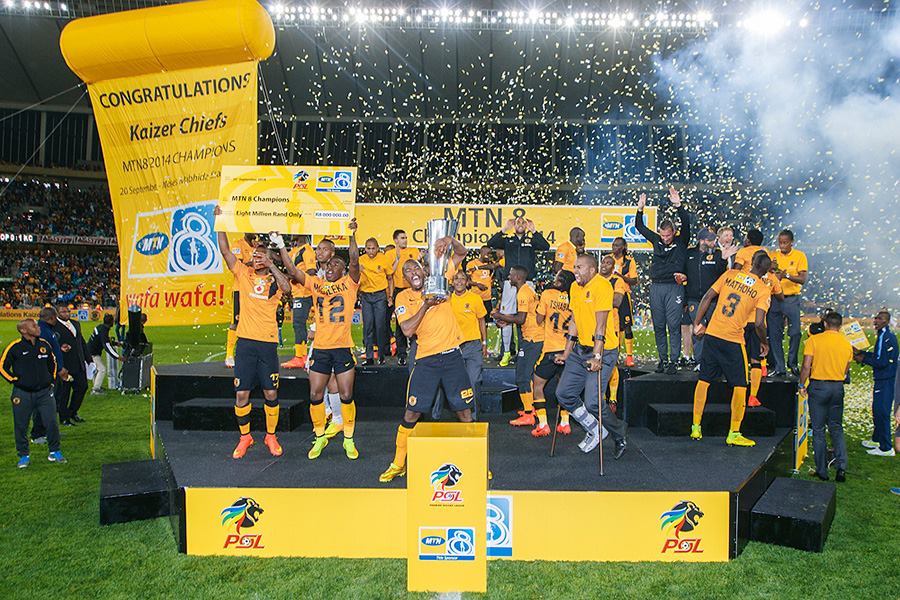 The Winners of MTN8 – Kaizer Chiefs

Kaizer Chiefs beat Soweto rivals Orlando Pirates 1-0 at  Moses Mabhida Stadium in Durban thanks to Tefu Mashamaite’s solitary goal.  Another feather in Durban’s cap was the announcement of the Man of the Match Brillant Khuzwayo, who was born in Durban!

MTN8 tickets sold out in Hours

Kaizer Chiefs made it a perfect 10 in Durban on Saturday night, clinching the MTN8 title for the first time since 2008 against their Soweto rivals Orlando Pirates, who were on the losing side at this venue last season against Platinum Stars. After the long awaited announcement of the venue, tickets sold out in a few hours.

Motaung said there was a pressure on the Kaizer Chief  team to satisfy their hoards of supporters who came to watch them on the coast.  ”I’m happy that the people are happy here in Durban,” Motaung said after the match.

Durban is “Home away from Home”

“This is a home away from home so at all costs we needed to win this game. They don’t come as big as this one in the country so the boys knew they have to give it their all so they don’t disappoint the people in Durban.  ”This game was a very great advert for South African football, both teams dished out very good football.”
It was all Kaizer Chiefs in the opening stages of the game and their persistence finally paid off before the half hour mark. Midfielder George Maluleka’s well taken set-piece was comfortably headed home by an unmarked Mashamaite in the box.

Man of the Match

Mashamaite was the hero for Amakhosi on the night, but goalkeeper Brilliant Khuzwayo deserves credit for the clean sheet Amakhosi kept, their fourth in the competition.
Almost 10 minutes before Mashamaite broke the deadlock, Khuzwayo showed his brilliant reflexes to stop what looked a certain goal, as he got down well to his right to stop Oupa Manyisa’s close range shot. And to think throughout the week the major talking point and concern for Amakhosi supporters was the absence of their inspirational captain Khune. Clearly there was no need to worry for fans of Kaizer Chief.

Khune was watching from the stands and must have loved watching his deputy deliver an outstanding performance.
Khuzwayo was born in Umlazi, a township outside Durban, and had his family at the stadium watching him. His dad, a die-hard Amakhosi fan, must have been the happiest man in this packed stadium.
Khuzwayo, who was named Man-of-the-Match and then dedicated the award to his late mother, produced the goods again early in the second half, getting down well to stop Kermit Erasmus’s shot. The goalkeeper made three more saves in the half later in the half, endearing himself to the Amakhosi fans.

Kaizer Chiefs have now won 15 top eight titles – two as the MTN8 after last winning it in 2008 – and have now won 10 straight competitive matches this season.