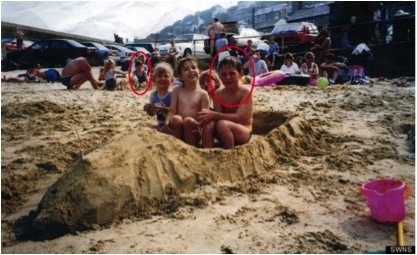 By I Love Durban
Awesome, Weddings

Is this coincidence or the destiny of true love?

As the engaged couple, Aimee Maiden and Nick Wheeler, were going through childhood photos at Nick’s grandparents’ house, they made an unexpectedly awesome discovery. In the background of Nick’s photo… guess who?
Yep. Aimee.

The little girl in the background, having no idea she would some day marry the boy getting his picture taken, is Aimee.
20 years later, they are now married.

The first photo was taken in 1994 in Mousehole, Cornwall (UK) where Aimee grew up. But Nick lived 300 miles away and happened to be there visiting family on that day.
We think that this is two people that were destined to be with each other!
Source: Huffington Post