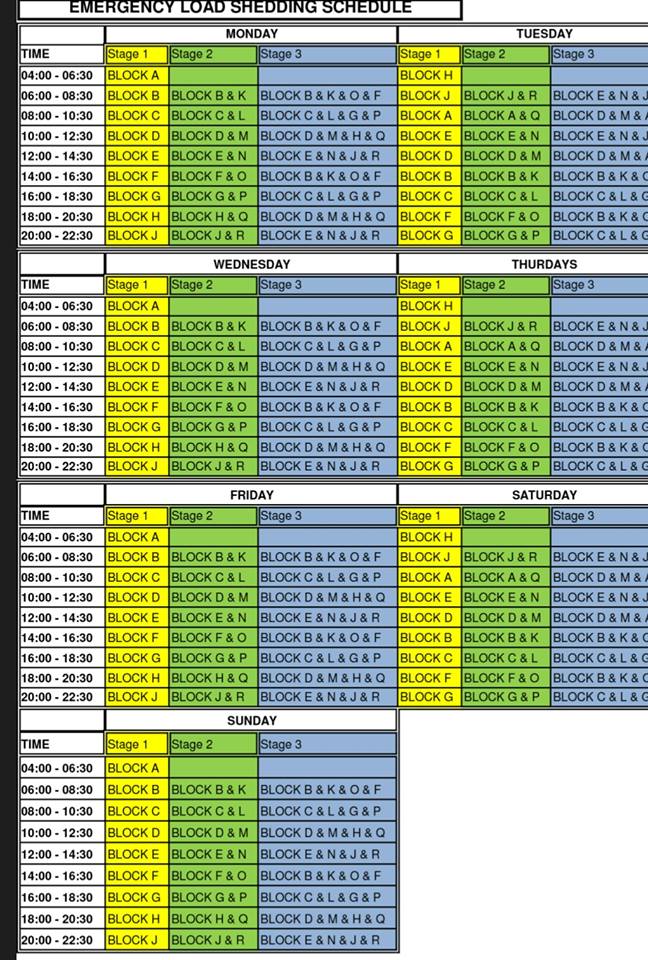 Eskom Announces Power Emergency On Sunday As They Go Into Stage 2 Of Load Shedding! Please Familiarize Yourself With The Schedule As The Situation Might Continue Within The Week!!

Eskom declared a power “emergency” today, (Sunday) and told large industrial users to cut their consumption by up to 10% to ease pressure on the already heavily strained national grid.
The declaration was made in conjunction with the last of two days of rolling blackouts. The added strain is a result of 2 plants (Majuba and Matimba) not performing, resulting in a loss of production of 1 700 MW of power, Eskom said.
In a statement from Eskom today, the national electricity supplier said, “Eskom has declared a power emergency with large industrial customers, requiring them to urgently reduce their electricity usage by 10% from 15:00 to 20:00 today. The declaration of a power emergency follows in addition to the implementation of stage two of load shedding earlier today [Sunday].”
Due to loss of additional generating capacity, Eskom implemented stage two load shedding at noon today and this would continue until 22:00 this evening.

The Expected Situation For The Week

“The risk of load shedding for tomorrow [Monday] and Tuesday is medium to low. This is owing to steady progress made in building reserves to limit the risk of load shedding next week,” Eskom said today. However, other reports indicate that the situation might not rectify itself.
Eskom’s concerns grow regarding diesel supply for alternative power stations which use diesel. These stations are expensive to run as diesel is costly, increasing the cost for Eskom to provide electricity. These stations however, will need to be used if the power supplier can not recover it’s reserves from the load-shedding this weekend.
Andrew Etzinger, spokesperson for Eskom has said, “Now we are virtually running them (diesel stations) on a permanent basis.” PetroSA’s vice president of corporate affairs Zama Luthuli told the Sunday Times that Eskom had been supplied “in excess of their normal requirements” of diesel.
“We’ve secured additional supply through imports and we expect the situation to normalise in the coming few days,” she was quoted as saying.
Residents are advised to prepare for load-shedding, as it is not confirmed if the reserves have been recovered.