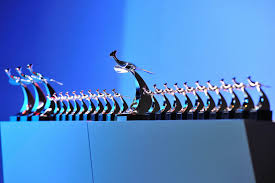 The Prestigious Loerie Awards Will be Hosted In Durban In 2015! This Will Be A Great Boost To Our Economy.

The Loerie Awards, which celebrates the creative talent in the country has today announced the venue for the 2015 Loerie Awards will be Durban. This is a tremendous boost for Durban in many ways, as the awards brings together everyone from the brand communication and advertising industry. Launched in 1978, the Loeries, as it is commonly known, has grown into one of the most well attended events on the South African calender.
Loeries Creative Week will be held at the Durban International Conference Centre (Durban ICC) and along the Durban beachfront in 2015. Loeries Creative Week will also take place a month earlier than previously, between 10 and 16 August 2015.

Andrew Human, the Loeries CEO said that Durban was chosen as the venue for a number of different reasons. He said, “Durban can be reached fairly easily by plane or car from Cape Town and Johannesburg which makes it affordable and convenient for the majority of participants. Durban is also sunny and warm virtually year round.  The Durban ICC will allow us to increase our seating capacity from 1600 to 2200 and all activities and accommodation will be conveniently concentrated within walking distance along the beachfront and at the ICC.”


What Will The Loeries Bring To Durban

New partners for the event are the EThekwini Municipality, Tourism KwaZulu-Natal (TKZN) and the Department of Economic Development, Tourism and Environmental Affairs and the KwaZulu-Natal Province.
Micheal Mabuyakhulu, MEC for Economic Development, Tourism and Environmental Affairs said, “We are very excited to be hosting the Loeries in the KwaZulu-Natal province, once again. We look forward to welcoming the brand communications fraternity to our beautiful province. We hope they will take time and explore our beautiful landscapes and scenery and return to the province after the event to use it as backdrop in their projects in the future. The province has now established the KZN Film Commission and we trust that through this partnership, we will increase the number of television commercials being shot here. We also estimate that by hosting the Loeries in the province, more than R100 million will be injected into the local economy.’’

Durban’s ICC Is The Venue For The Loerie Awards

eThekwini Mayor, James Nxumalo also expressed his delight at the Loeries being hosted in Durban. he said, “We are delighted to be the hosts of what is the most important annual showcase for the Pan African brand communications industry. This will provide Durban with a unique opportunity to showcase its talents and potential in this realm. In addition, the Loeries will provide representatives of our local creative industry with an opportunity to participate in and learn from this key event.”
Tsogo Sun will be the Official Accommodation Partner of the Loeries. Special accommodation packages will be made available to Loeries delegates at the Southern Sun Elangeni & Maharani, Suncoast Casino and Garden Court.

Dates To Remember For The Loeries