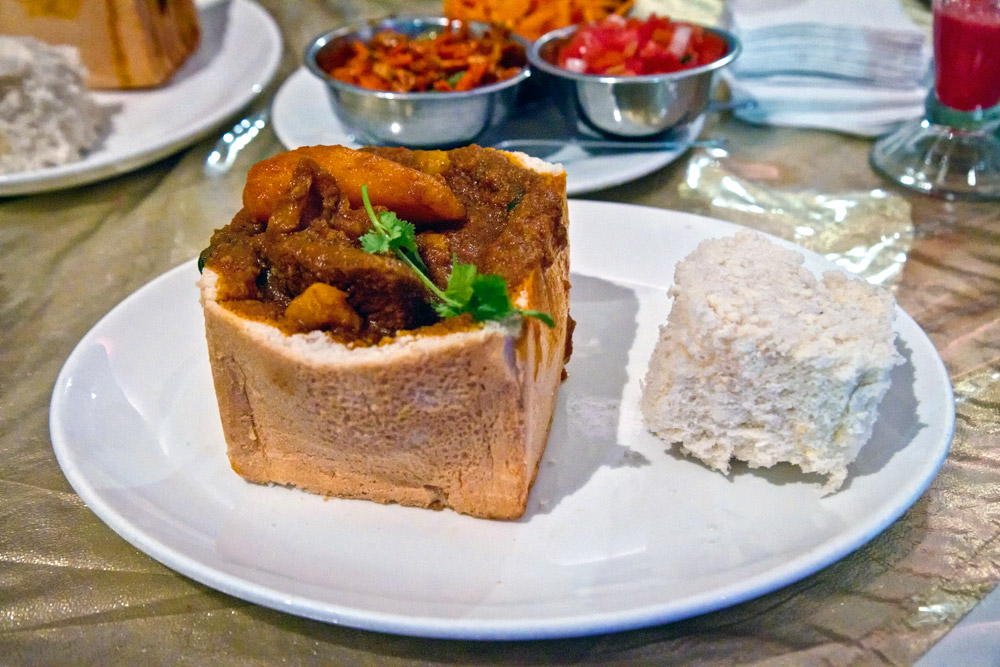 By I Love Durban
Awesome, Entertainment, Food, Things to Do

For the Love of a Durban Bunny Chow!

If you love Bunny Chows and are always on the hunt for the best Bunny,then you are going to love this! Each year, the Bunny Chow Barometer Competition is held on the south bank of the Umgeni River, just above Blue Lagoon.

Blue Lagoon – Venue for The Competition

The Top 10 finalists of Durban’s Best Bunnies get to battle it out for the Title of BEST Bunny in KZN and you will get a chance to sample some of the best Bunny Chows in Durban. Local Durban Bakery Baking Pan is also making KZN’s biggest Bunny in A Box. There are also Loads of Entertainment, comedy and Prizes to be won. The Event is being held this Sunday, 07 September 2014 and starts at 10am.

Bunny chow, often referred to as a bunny,  is a South African fast food dish consisting of a hollowed out loaf of bread filled with curry. It originated in the Durban Indian community. Bunny chow is also called a kota (“quarter”) in many parts of South Africa.
The bunny chow was created in Durban, home to a large community of people of Indian origin. The precise origins of the food are disputed, although its creation has been dated to the 1940s. It was also sold in Gwelo, Rhodesia (now Gweru), during WWII and is still sold in the nearby town of Kadoma, formerly known as Gatooma.
Stories of the origin of bunny chow date as far back as the migrant Indian workers arrival in South Africa. One account suggests that Indian migrant workers from India who were brought to South Africa to work the sugar cane plantations of Kwazulu-Natal (Port Natal) required a way of carrying their lunches to the field; a hollowed out loaf of bread was a convenient way to transport their vegetarian curries. Meat based fillings came later. The use of a loaf of bread can also be ascribed to the lack of the traditional roti bread, in the absence of which a loaf of bread would be acceptable as an accompaniment to curry.

Bunny chows are popular amongst Indians, as well as other ethnic groups in the Durban area. Bunny chows are commonly filled with curries made using traditional recipes from Durban: mutton or lamb, chicken, bean and chips with curry gravy are popular fillings now, although the original bunny chow was vegetarian. Bunny chows are often served with a side portion of grated carrot, chilli and onion salad, commonly known as sambals. A key characteristic of a bunny chow is created when gravy from the curry fillings soak into the walls of the bread, thereby rounding the dish off with the fusion of flavours & textures. Sharing a single bunny chow is not uncommon.
Bunny chows come in quarter, half and full loaves. When ordering a bunny chow in Durban, the local slang dictates that you need only ask for a “quarter mutton” (or flavour and size of your choice). Bunny chows are mainly eaten using the fingers; it is unusual to see locals use utensils when eating this dish. Bunny chow is presented to customers wrapped in yesterday’s newspapers.

Today bunny chows are available in many small take-aways and Indian restaurants throughout South Africa. The price ranges from R6 for a quarter beans or dhal, to R40 for a quarter mutton bunny, and generally one can multiply the price of a quarter by between 3 and 4 to attain the price of a full bunny.
So whether you eat it with fingers or forks, make sure you get to experience this truly authentic Durban cuisine. See you this Sunday at 10am!