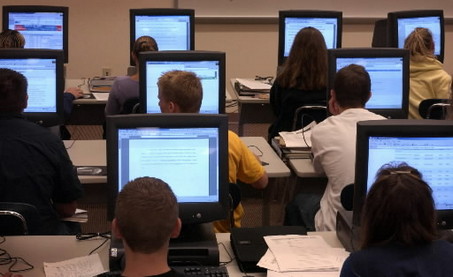 Education Departments across South Africa are ready as the matrics of 2014 start their exams.

The KZN Department of Education has  conducted an audit to ensure that all computers are ready for the exams. The first paper will be written at 9am today, when approximately 6200 candidates all over KZN  start their final Matric Exam with a three-hour Computer Applications Technology (CAT) practical paper.

This year at least 700,000 candidates both full and part-time have registered for the National Senior Certificate exams.
Last year Minister of Basic Education Angie Motshekga, announced that the matrics of 2013 made history in two ways, when she announced the historic 78.2% pass rate of the 2013 matrics.
Firstly, this was the highest pass rate in the history of post-1994 education in South Africa after 2012’s 73.9%. Secondly, the announcement was made against a backdrop of scepticism even before the results were released.Last year more than 550 000 full-time candidates and over 135 000 part-time candidates sat for the National Senior Certificate exams.

Western Cape, Education MEC Debbie Shafer says they have prepared for any eventuality.
“Our department has done everything they possibly can to ensure the exams will go smoothly. We have contingency plans in place in the event of power failures, they really have gone into great detail in every possible scenario.”
Earlier this month the Gauteng Education Department says it’s aiming for a 90 percent matric pass rate this year.
Gauteng Education MEC, Panyaza Lesufi says the province has proven to be the best and is now aiming to compete with the matrics from Brics countries.

“Matric results reflect how we treat out children as a society, so I am making a passionate plea to all parents – let’s not send our children to go and pay accounts or go and buy things for us, let’s allow our children to study. We must not bother these children.”

Tomorrow, the matrics will be writing their Information Technology Practical Paper and exams end on November 28 2014.
Good Luck to all Matrics writing this year and hopefully we get to beat another record with amazing results!