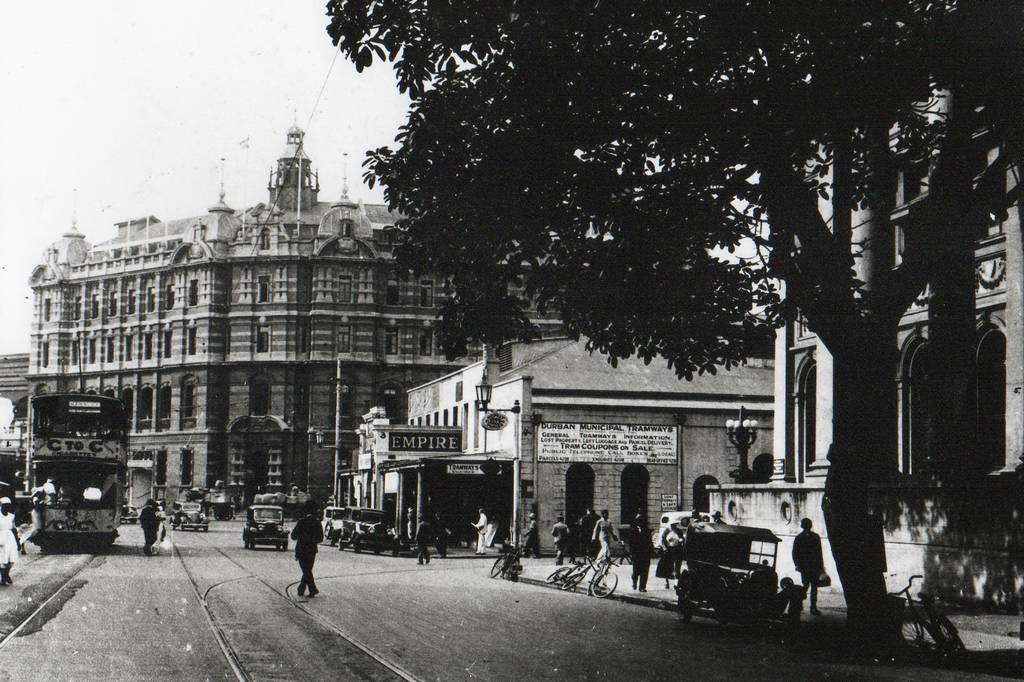 Going to watch a movie is still a favorite past time for many. Most movie theatres today are located in shopping centers or  entertainment complexes. Movie theatres have been established for over a hundred years in Durban, and were previously located in stand alone buildings. A Saturday matinée was one of the most popular showtimes.
The Electric Cinema opened in Durban on July 29, 1909, only four years after the world’s first permanent cinema, the Nickelodeon, opened in Pittsburgh in the United States. It stood in Pixley kaSeme Street (formerly West Street) — a converted chapel opposite the new city hall then nearing ­completion in time for the formation of the Union of South Africa in 1910.
On 11 December 1910 the first “Electric Theatre” for “Coloured People Only” was opened on the corner of Grey and Alice Streets in Durban. The first programmes showed scenes outside the mosque in Grey Street.
In 1912, the Empire Theatres Company was formed. The Empire in Durban was opened near Gardiner Street. Movie goers would enjoy a Saturday matinée and ice cream after from the Model Dairy shop.

The Metro was also a popular movie venue reserved for whites only. The Metro ran until 1971. The building in which it was housed was demolished, once of the first large movie houses to be demolished as television became more popular.

The Playhouse was also a movie venue for many. It was also reserved for whites only.

During the early days of silent movies the two cinemas operating in the Grey Street area were the Victoria Picture Palace and the Royal Picture Palace, both situated in Victoria Street and run by an English Company, the African Theatre Company. “Rawat′s Bio” as it was fondly called, was the first Indian-owned cinema in the Grey Street area. In 1940 Kajee and Moosa opened the Avalon Cinema which also served as a venue for community meetings.

The Avlon Also Served As A Community Meeting Place (picture sourced from neil.iaminawe.com)

The Naaz Cinema seated 800 people and specialised in Indian films. The Indian films were very popular. Amongst the patrons of the Naaz cinema were the residents of the Durban Corporation′s Magazine Barracks and the Railway Barracks. Ramnikal would run a Tamil film for four shows a day and the film would run for up to four or five weeks continuously, Monday to Saturday. These shows were always well attended as people enjoyed the music and dancing and to see how people in India lived.

The Shah Jehan Cinema, named after the emperor responsible for the building of the Taj Mahal in India, was established by the Rajab Brothers in 1956. Located in Grey Street, the Shah Jehan was the largest cinema in the Grey Street area at that time, seating more than 800 people in the main circle with three private boxes in addition. The Shah Jehan featured mainly films in the English language. The opening movie was “Seven brides for Seven Brothers” and tickets were sold out for weeks on end.

Twenty years after the Rajab Brothers had established the Shah Jehan they embarked on the launch of a new movie theatre, the Isfahan. The Isfahan, named after a Persian city famous for its carpets, opened on 4 November 1976. The opening movie was “Siddhartha”. The Isfahan seated a maximum of 700 people.

The Rajab brothers opened their second cinema on 26 April 1968, the Shiraz which was housed in the new Rajab Centre in Victoria Street. In addition to the Shiraz Cinema, which occupied the first two floors of the centre. Like the Shah Jehan, the Shiraz is named after a city in Persia. The opening film was “The Professionals”.

Do you remember the first movie you watched at a cinema and which cinema it was? Let us know in the comments below.
*information sourced from www.fad.co.za and www.sahistory.org.za