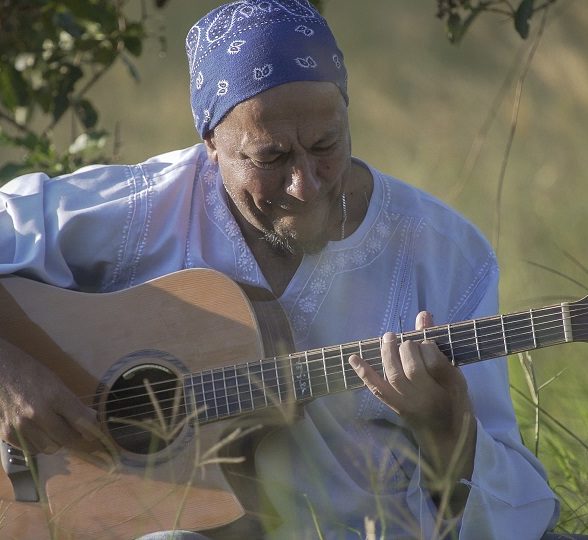 By I Love Durban
Music
Nibs van der Spuy is happy to be returning to the Conscious Café, on Friday 14 September, for an exclusive and intimate solo performance. He is out from Europe on a short visit and will be playing material spanning his whole career. Nibs will also be giving us a taste of some newly written songs inspired by his new adventures in Europe. Book now! Not to be missed!!

“Excellent! A voice full of wonder and humility of the songs it sings.” (ROLLING STONE) **** August 2013
“If you ever see a promotional ad for one of Nibs’s concerts, you should not miss out on the opportunity to experience a great guitarist and singer/songwriter”.  SHAWN PHILLIPS (Legendary Texan Songwriter)
“A discovery! Classical touches, Zulu melodies and his thrilling airy voice” (LE MONDE, FRANCE)
“Beautifully weighted and filigreed acoustic playing” (UNCUT)
“The most sensitive and breathy songs on the continent with classy, gently sturdy guitar work” (GUARDIAN UK)
“Nibs is a foremost proponent of the fine weave of cultural sounds that are this country” (SUNDAY TIMES, 5 STARS)
Nibs van der Spuy is one of the most extraordinary and exciting, world acoustic guitarists and exports to come out of South Africa. Raised in the fertile province of Kwazulu Natal, Nibs immersed himself in his natural environment to formulate a truly consummate and original sound. Growing up with the Beatles and learning first hand from traditional Zulu Maskandi guitarists, he quickly soaked up a rich tapestry of his close surroundings and beyond.
After playing the local folk scene around South Africa for years and gathering up a loyal following, his big stage break came after supporting Crosby, Stills and Nash on their 1996 South African tour. After that he was signed to the SHEER (South African World Music label) where he has released over 10 albums.
His third solo release, BEAUTIFUL FEET received highly acclaimed accolades around the world where it was album of the month in four German publications and RADIO FRANCE FIP pick of the week. Nibs continues to spread his musical beauty around the world where he has shared stages with the likes of Ben Harper, Bonnie Rait, Taj Mahal, Gito Baloi, Kelly Joe Phelps, Piers Faccini, Phillip Henry & Hannah Martin and Shawn Phillips and recording the critically acclaimed, ‘In the shade of the wild fig’, with long-time friend and collaborator, Guy Buttery.
In September 2016 Nibs released his new solo album,’ NATALIA‘, produced by world renowned producer Mark Tucker (Portishead, PJ Harvey, Jethro Tull).