Oscar To Go To Jail! 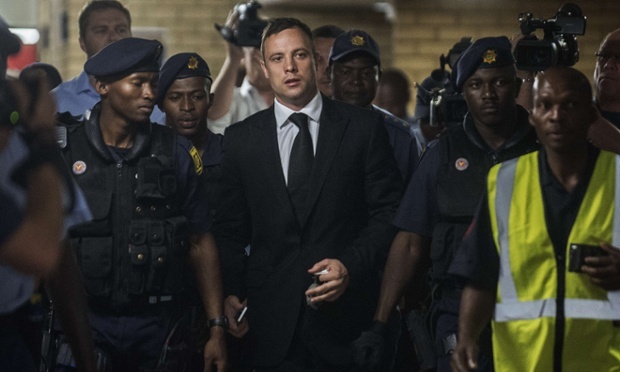 Today, in what is possibly one of the most popular court cases in recent South African history, Honorable Judge Thokozile Masipa handed down sentencing on paralympian Oscar Pistorius. It was announced that Oscar will serve a maximum of 5 years in jail for the culpable homicide of his then girlfriend, Reeva Steenkamp.

Oscar Pistorious Arriving At Court For His Sentencing

As Oscar is lead into the cells and fingerprinted, which will be checked as he enters prison, news of his sentencing and the leniency of his sentence is discussed in newsrooms and on social media across the world. The minimum amount of time that he will serve in prison will be 8 months, after which time correctional services will review his behavior and determine if the remainder of his sentence will be served from home under house arrest.
The public has voiced emotional reactions via Twitter, a stark contrast to the unemotional reaction of Pistorious  to his sentencing in the courtroom. He grabbed his uncle Arnold and Aunt Lois’s hands as he was led into the holding cells.
Pistorious, who was also convicted for negligent disarming of a firearm in public will serve 3 years suspended sentence concurrently for that conviction.

The lawyer for the Steenkamp family have said that they feel justice has been served. Father of the deceased, has suffered weakening health conditions since the trial has begun.
There is a 14 day period in which the state can appeal the sentencing that was handed down.
What are your thoughts on Oscar’s sentence? Let us know in the comments below.