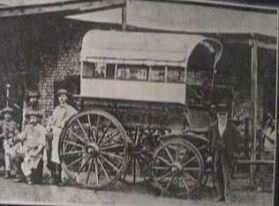 By I Love Durban
Awesome, Health, Things to Do, Travel

We came across some amazing pics and incredible stories about this Nature Reserve which is right on our doorstep and is often overlooked. The Palmiet Nature Reserve, named after the riverine plant Prionium serratum (Palmiet) which was formerly abundant in the area, can be found in the heart of Westville. It consists of 90 hectares where you can find a relatively small river occupying a very deep valley, spectacular cliffs, forest and grassland. It is home to banded mongooses, blue duiker, dassies, vervet monkeys and many bird species can be seen here.

An old Wagon on the Reserve: Source: palmiet.za.net

The Palmiet Nature Reserve (PNR) opened in September 1972. However its history goes back thousands of years before this time. A Stone Age implement found dates to 40 000 years or older. Evidence has been found, in recent excavations in PNR, of iron age artifacts, dating to between 1700 and 800 years ago linked to people, from which the present Zulu culture evolved, who would have roamed the Palmiet River valley and well before the later European settlers in the area.
This amazing Reserve is located in Westville which forms part of the eThekweni (Durban) Metro Region of South Africa. The Palmiet Valley was well known to the original families from Germany who settled here in 1848. It was through this wild rugged valley that they travelled to attend church or to visit friends in neighbouring New Germany. The route followed the present day Old New Germany Road, which is now the starting point of the Palmiet Trail into the Nature Reserve.
Jan Hofmeyr Road was the old ox-wagon route from Durban which followed the watershed into the interior. This also served as the main road until the present four-lane highway was opened in 1948. There is some doubt about the exact location of the famous Outspan Tree, but it is known that the former wild fig tree (Ficus natalensis) in Jan Hofmeyr road was an outspan. From here it was an easy matter to hunt in the nearby wild Palmiet valley. E.R. Browne, a former Mayor of Westville, recalls a frightening experience which happened in 1875. Huntley operated the twice weekly post-cart between Durban and Pietermaritzburg. One day his children went down to the Palmiet river near the Cascades to play and swim. One of the children was encircled by a 20 foot (6m) python. Help was summoned from the Berea West farm of Mr Konigkramer, a pioneer German settler. Konigkramer together with his staff rushed to the scene with his rifle and shot the snake which was still coiled round the unfortunate child, who by this time was blue. The farmhands had to chop the snake off with bush knives. It was probably this incident which caused Huntley to abandon the post-cart service.

Pythons on the Reserve – Source: palmiet.za.net

Another story is told of a farmer who lived on the northern side of the valley. While gathering up his potato crop he was attacked by a lion. From 1875 the wild character of the valley from Old New Germany Road downstream changed considerably when Indian market gardeners were given title to small holdings on the steep slopes. Remnants of their crops can still be seen on the Palmiet Trail before the Reserve is entered. An old Westville resident, Dr. I. Harrison, who lived in Northcliffe Avenue, remembers going to swim near the Cascades in the 1930’s. The valley sides from Northcliffe Avenue were cultivated with bananas, pineapples, mangoes and pawpaws.
The valley was more open than it is today making it easier to see the prolific bird life. She has memories of sighting numerous kingfishers and owls while masses of Agapanthus grew on the krantzes and several large Cape Chestnuts {Calodendroll capense} provided a brilliant display of colour in summer. It would seem that it was only the inaccessible parts, such as the cliff-faces, that were in many places quite safe from “apprehension of the axe”, as quoted earlier. Such places are probably very much the same today as they were over a hundred years ago.

The Palmiet Nature Reserve  offers diverse ecological and wildlife habitats. It is home to more than 150 bird and 170 tree species. It is a haven of solitude in the heart of the residential suburb of Westville. There are about 15 kilometres of hiking trails, including those extending into the University of KwaZulu-Natal Westville Campus Conservancy . It offers many educational and recreational opportunities for scholars, residents and visitors from further afield. It is thus an important component of the eThekwini Metropolitan Open Space System (MOSS)
The good news is that, on 1st June 2006, Palmiet Nature Reserve was officially proclaimed a Nature Reserve, ie a protected area in terms of the KZN Nature Conservation Management Act, by the KwaZulu-Natal Province . This concludes a process which commenced in 1989. The Manager, Steve Butler, is thanked for his tireless work in securing this enhanced protection status for the Reserve, which is the only Municipal Reserve in eThekwini to have this proclamation.

So the next time, the kids complain that they are bored and that there is nothing to do, head down to this incredible landmark and begin exploring!!
Directions:
The Palmiet Nature Reserve is in Westville. From the N3, traveling towards Pinetown, take exit 13 – St James Avenue/Spine Road. This is the off-ramp you would take when going to the Pavilion Shopping Centre. Turn right across the bridge and travel along Attercliffe Road until you get to the T-junction. You will notice the Westville Public Pool on your left. At the T-junction turn right into Jan Hofmeyer Road. Just before the Village Market Centre, turn left into Old New Germany Road. The Palmiet Nature Reserve will be on your right.

There is a network of trails, totaling a distance of 15 kilometers. You can choose a distance that suits your fitness level, from a 15 minute route to one that will take you 2 hours to complete.

Open from 7am to 6pm; no booking is required; donations are welcome, but no fee is payable.

You will need the following: