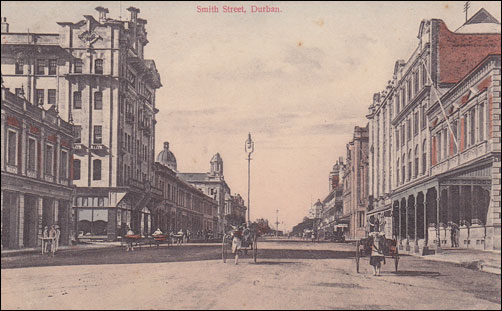 The Playhouse Theatre Is A Landmark Of Culture And History In Durban. Our Throwback Thursday Is Dedicated To This Monument Of Durban’s History!

One of Durban’s historic landmarks, this building started out as a picture palace 1896 and was rebuilt in 1927 in Tudor revival style. Situated on Anton Lembede Street ( Smith Street) the Playhouse form one of two historic buildings in Durban. The Durban City Hall being the other famous building.

The Playhouse was first intended as a cinema, namely the glamorous Prince’s Theatre, which originated in 1926.Following that, the building was then renovated into the grand, Tudor-styled Playhouse, which originally opened its doors to public fanfares and capacity house in 1935. The Princes cinema remained in it’s own building next to the Playhouse building.

The Playhouse was a popular venue for more than just performances. The venue was also used to host various events such as wedding receptions. We discovered this as we were searching for history of the Playhouse.

A wedding Menu from 1947(picture sourced from William Patterson via www.fad.co.za)

In the early 1980s, these two celebrated entertainment venues underwent expert renovation and conversion into a state-of-the-art, multi-venue theatre complex that faithfully preserved many of the buildings’ original characteristics and architectural features. This was officially opened in the mid ’80s as The Natal Playhouse, subsequently to become known by its present-day title The Playhouse, Kwazulu-Natal’s premier theatre complex and home of The Playhouse Company.

Taken about 1980s showing the Prince’s on the right when it was about to be incorporated into the Playhouse which is on the left(picture sourced from www.fad.co.za)

In 1986 the Natal Playhouse complex opened as NAPAC’s official home for the various departments, including the Natal Philharmonic Orchestra (founded 1983) and, in 1985, the Napac Dance Company, the Loft Theatre Company and the Musicals Department.
Today the Playhouse Company is mandated to produce a programme of live theatre productions in the fields of music, drama and dance, representative of the diverse cultural groups that comprise the population of KwaZulu-Natal.
In addition, the company holds the responsibility of devising and managing a dynamic education and development programme in the performing arts with respect to growing youth audiences as well as nurturing community based artists, groups and organizations that are in need of back-up from the company’s marketing expertise and technical resources.

The Playhouse Company also has the responsibility of managing the Playhouse complex’s various performance and public venues that are for hire when not in use for the Company’s own productions, or those presented in association with The Playhouse Company.
*information sourced from www.fad.co.za and www.playhousecompany.com