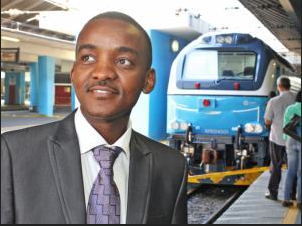 “If it can be done for Europe, it can be done for Africa.” The Passenger Rail Agency of South Africa (Prasa) has unveiled the high-powered Afro 4000-series diesel locomotive, which it says will improve the efficiency of passenger rail services in South Africa.
This innovation to the  Transport Industry in South Africa,which will put it on par with international standards, is attributed to the dreams of a KZN Engineer.
The man leading the project is KwaZulu Natal Engineer Dr Daniel Mtimkulu, and on Monday his drams were realised at the unveiling of the first new locally designed locomotive at Cape Town Station. It was a proud day for Mtimkulu, who grew up in Estcourt, KwaZulu-Natal.
“My grandfather gave me this desire to be an engineer. I started with fixing bicycles, geysers and radios. That desire to design – that’s what he instilled in me.”
Mtimkulu did three years of engineering studies at the University of the Witwatersrand before being awarded a scholarship to study in Germany.

The introduction of the high-powered Afro 4000-series diesel locomotive will improve the efficiency of South African railway networks.

After six years studying and working there, he was offered citizenship – but refused, and returned home to work for the Passenger Rail Association of SA (Prasa), where he is now head of engineering services.
It was Mtimkulu’s job to negotiate with the European manufacturers until they accepted the specifications he drew up – made to operate efficiently with minimal maintenance and wastage in South African terrain and climate.
“For me, it’s humbling to see a design with a unique African flavour.”
The Afro 4000 may have been manufactured in Spain, but it was designed by 34-year-old Mtimkulu and his star team of engineers in collaboration with Stellenbosch University students.
The diesel locomotive is the first of its kind in Africa, and the first new passenger locomotive to be commissioned in South Africa since 1958.
The engine coach, fresh off the ship from Spain, is the first of 70 units set to help modernise the ageing fleet in a R46 million procurement deal.
Mosenngwa Mofi, the chief executive of Prasa Rail, said at the launch at Cape Town station on Monday that the introduction of the new locomotive was “a realisation of a dream – a dream that will change the travelling experience of all South Africans”

Many of Mtimkulu’s design innovations will continue to be used when a new train manufacturing plant in Gauteng is completed in the future.
Prasa chief executive Mosenngwa Mofi said the new locomotives would make a huge difference to a service crippled by past disinvestment and falling into disrepair.
“This is the realisation of a long-standing dream; a dream that will change the travel experience of South Africans forever.”
The locomotives are mostly destined for long-distance passenger and freight rail between Cape Town and Joburg, but local services will feel the positive spin-off.
New chairman of the Prasa board, Dr Popo Molefe, said they would inject life into the system.
“We are trying to keep alive a system that is terminally ill in the intensive care ward. You fix it today, tomorrow it breaks. That’s why commuters get frustrated and burn their own assets.”
The new high-powered locomotive marked a turning point in the State-owned entity’s ambitious plans to modernise and rehabilitate South Africa’s railway network, which has suffered from ageing infrastructure and rolling stock and delays.
According to a report in Business Day, the new locomotives were designed in Spain by rail industry manufacturer Vossloh according to Prasa specifications to suit local conditions and come fitted with the latest technology.
“The critical factor is to improve the journey experience and encourage more long- distance travel,” Mofi said. “This can only be achieved by providing reliable, efficient locomotives to haul these trains, thus minimising en-route delays.”

Mofi said Prasa would also acquire other new, modern trains over the next 10 years as part of a R51-billion contract with the Gibela Rail Consortium.
The Spanish locomotives will be tested for three months, and would start operating officially in March 2015.

The new locomotives will be used primarily to serve the long-distance market, with 10 of the 70 locomotives allocated to the Eastern Cape region.
The trains will run along six long-distance corridors, including the Johannesburg to Cape Town route. This will be increased to 10 corridors as soon as Prasa received the new stock during the first half of 2015.
The locomotives have a display unit with various management systems that will allow the driver to detect and reset any faults. They are the first in the country to have two driving cabs – allowing the train to travel in both directions without turning.

The trains have automatic doors and open gangways that would allow for visibility throughout the train.
The acquisition of the new Afro 4000 locomotive series was an overwhelming occasion as PRASA.
“A whole lot of us are emotional today because this is a realisation of a dream, a dream that will change the travelling experience of all South Africans,” said Molefe. The launch was seen as a step closer to the rail operator addressing concerns of train delays, which have plagued the rail network – angering commuters in the process.
“The critical factor is to improve the journey experience and encourage more long distance travel. This can only be achieved by providing reliable, efficient locomotives to haul these trains, thus minimising en route delays,” he said.