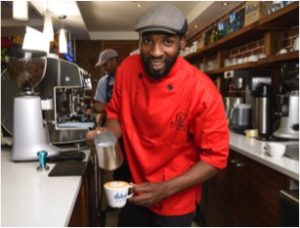 By I Love Durban
Awesome, Competition, Durban, Entertainment, Restaurants, Things to Do

Johannesburg, South Africa– With the Speciality Coffee Association of Southern Africa’s National Coffee Competitions looming, Wiesenhof Coffee Roastery is getting ready to impress with two of its leading coffee experts competing for the crown of the country’s best barista.

The competitions take place at the Ballito Lifestyle Centre outside Durban from 21 to 24 February and will see the country’s top coffee companies and individual baristas gathering to battle it out for leading honours.

It uses the finest 100% Arabica beans in its blends, ensuring top quality and unrivaled cup profiles. Its coffees are known for being genuine specialty coffees with beans sourced from different estates throughout the world, making sure that the variety is among the smoothest and most flavourful coffees available. Unique flavours are available for every palate and are made up of a variety of flavour profiles that suit the wide range of taste requirements throughout Wiesenhof’s client base.

The two Wiesenhof “gurus” who have qualified for and are competing in the National Barista Competition are Raymond “Ray” Roesstorff, Regional Operations Advisor for the Wiesenhof and Dulcégroups in Durban and the Eastern Cape and Khulekani “Khule” Mpala, the groups’ National Beverage Specialist.

Ray’s coffee journey began when he joined Dulcé Café in 2004 as a general manager.

“I had the basics for making coffee but didn’t really love it back then,” he says. “As the industry grew and the public became more knowledgeable about coffee, I had to grow too and started to educate myself on the art of making a great cuppa, practicing on the machines that were available to me in the café.”

Ray eventually left Dulcé in 2013, joining Wiesenhof where he got exposed to the roasting side of things. “I realised how much more I needed to learn about coffee, so school was back in session,” says Ray. “Now I am the 2018 Eastern Cape Barista Champion which qualified me for the Nationals. I also won the best technical title for Eastern Cape, which I am very proud of as it validates what I am teaching in our stores,” he adds. “I’m looking forward to the Nationals tremendously and am excited to see how I stack up against the rest of the country.”

Khule’s journey to the Nationals couldn’t be more different. Originally from Zimbabwe, this 44-year-old father of three came to South Africa in 2006 in search of a new life away from the political strife in his mother country. He came with a marketing qualification, his wife Norma, their three children and very little else.

“My first job here was as a security guard,” he says. “It didn’t exactly fuel my passion, but I needed to feed my family so kept my head down and worked hard. I was laid off after only a year but ended up working in a restaurant in Midstream, as a scullery hand in the kitchen,” he adds. “In 2008 I joined one of the Tribeca restaurants at a local Woolworths, which is where my passion for coffee began,” explains Khule. “I started at the bottom and learned from one of the top trainers in the group, developing a real passion for coffee along the way. I was then poached by the Seattle Coffee Company who made me a manager of their shop in Linksfield, training new baristas and managers joining the group,” he says.

“I’d love to win this year,” says Khule. “If I do, it means I will get to represent South Africa at the World Championships in Boston in April.”

Khule dreams of becoming one of the best baristas in the world. “I also want to see our coffee recognised as the best coffee in South Africa,” he says. But perhaps his biggest ambition is to pass on everything he has learned, empowering the group’s baristas with the knowledge and skill they need to enjoy long and fruitful careers and the recognition they deserve.