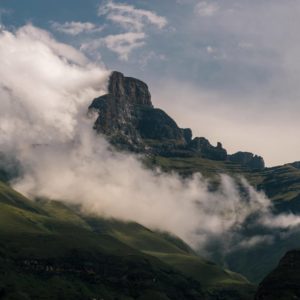 South Africa – 25 February 2019: The iconic Drakensberg, with its towering peaks, dramatic pinnacles and sheer rock walls was named ‘uKhahlamba’ – meaning ‘massed assegais,’ or, more colloquially ‘the barrier of spears’ by the Zulu nation centuries ago.

This dramatic mountain range has drawn adventure seekers and professional athletes for years – climbers, hikers, cyclists and trail runners have explored the many wonders of the escarpment, testing themselves against its highly variable elements.

“We’d seen all the amazing images and have been wanting to come down to South Africa and jump with Julian for years,” commented Miles Daisher, who holds the world record for the most BASE jumps in 24 hours, among many other accolades in this daring sport, and has jumped all over the world.

After scouting the area, two peaks stood out for the team, the Sentinel and the iconic Eastern Buttress, which rises some 3000m above sea level and features a vertical rock wall before sloping down into a scree* slope punctuated by dramatic, stream-carved valleys. Time, however, was tight and the weather window small.

Aside from the usual dangers associated with BASE jumping and wingsuit flying, there are also other elements at play. And, in the Drakensberg, with its impossible terrain and unpredictable weather elements – wind, cloud cover and rain – this is all too evident. The mountain is powerful and commands respect.

“The mission was to come out here and get our first taste of what the Drakensberg has to offer. The mission was successful a thousand percent and now we just want to come back and do more,” says Red Bull Air Force team manager, Jon Devore. “We live for the art of human flight”.

* Scree is a mass of small loose stones or rock fragments that form or cover a slope on a mountain ends.