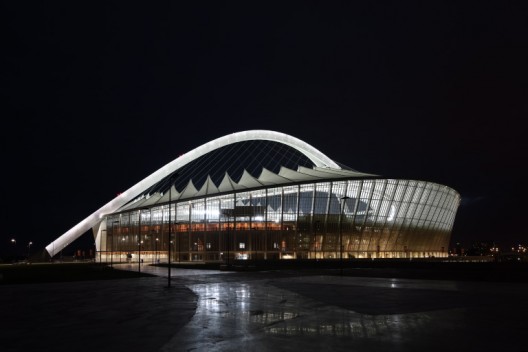 By I Love Durban
Awesome, Business, News, Sport, Things to Do

Durban Residents Support Of The Moses Mabhida Stadium Has Allowed The Stadium To Be One Of The Most Successful In South Africa!

Durbanites can give themselves a pat on the back for their patriotism to Durban and supporting the Moses Mabhida Stadium, making it the most viable stadium in South Africa. A report that was published earlier this week showed that the stadium is making millions a year, thanks to support from the locals.

The stadium, which currently sits in a deficit, has vastly improved the deficit of 34-million rand to 13 million rand in two years. That works out to 11 million rand per year to reduce the deficit. The stadium, which is valued at 3.1 billion rand is the only “commercially active” 2010 world cup stadium. The great planning around the stadium during conception stages has ensured that the stadium has multiple income streams even without events.
Some of the revenue streams include tenants, the SkyCar, The Adventure Walk, Big Swing, stadium tours and events. Stadium manager Vusi Mazibuko says, “This is a seven-day operation. The municipality is expecting us not only to maintain it, but to generate income. We generate about R80-million back into the municipal coffers. Every weekend, families are here with their children.”

The Childrens Playground At Peoples Park AT The Stadium (picture sourced from iheartmarket.blogspot)

Cape Town’s The R4.5-billion stadium does not enjoy any non-event day commercial rights due to the current zoning laws. But the City of Cape Town is reviewing the law, according to Garreth Bloor from Cape Town’s mayoral committee.

Some Interesting Facts Of The Stadium

The stadium is named after a giant of a man, Moses Mbheki Mncane Mabhida, who was one of those who helped to forge and maintain the powerful United Front that eventually saw the creation of a democratic and non-racial South Africa.
The shape of the iconic arch was inspired by the “Y shape” on the South African flag.
The grand centre arch, 106 m high, is not just a design feature. The SkyCar takes visitors up to its highest point, where they can get out and enjoy breathtaking, panoramic views of the city and ocean.

The colour arrangement of the seating was conceptualised to look like the sea flowing onto the beach
Each seat is spacious and comfortable, providing a clear line-of-sight to the pitch
The usual stadium seating capacity is 56 000 which can be up-scaled to 85 000 for major events, such as the Olympic Games.
Well done Durban for being a part of your city’s success.
*information sourced from www.timeslive.co.za and www.mmstadium.com