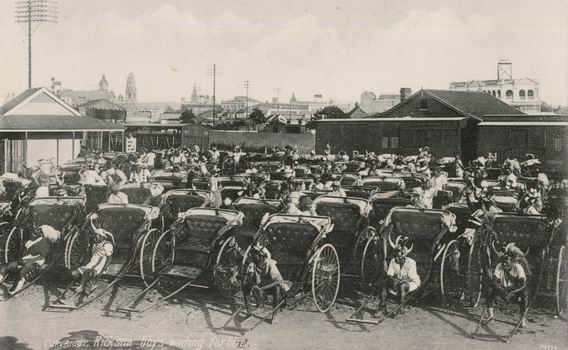 By I Love Durban
Art, Awesome, Entertainment, History, Things to Do, Travel

Rickshas Are A Popular Tourist Attraction In Durban. Today’s Throwback Thursday Is Dedicated To The Ricksha Pullers And The Important Part They Played In Durban’s History.

The first ten Rickshas / Rickshaws imported to Natal arrived in 1892, imported by sugar magnate Marshall Campbell from Japan. The ‘Ricksha’ became Durban’s main mode of transportation, both in the city centre and docks. By 1902, 2170 Rickshas crowded the streets, pulled by a small army of registered natives. Pulling a rickshaw was a highly sought after and competitive occupation. It is said that in two days a puller might earn a shilling, equal to what a ‘head boy’ working in a home might earn in a month.

A proposal was made for Ricksha pullers to wear uniforms. The uniform was an ordinary unbleached calico suit, trimmed with a single band of red braid. Pullers were allowed to dress their hair in a traditional manner and opted to walk barefoot. The feathered tufts above and below were called ‘Isiyaya’ or ‘Isidlukula’.

Cattle, which plays an important part in Zulu culture were incorporated into the Ricksha uniform. Two horns were added to the pullers brow to show the man to be as strong as an ox. Porcupine quills and feathers became part of the decorative competition. Some pullers walked the streets looking for customers, while others waited at designated ricksha rinks for people. Ricksha cart construction altered to allow twin seats to be added as well as longer handles. The longer handles allowed the puller to move forward or back quickly to balance weight. Once moving, the puller could sprint sprint forward delighting the passenger. A rod or foot was added to the rear so that the carriage could not fall backwards.
The ricksha service was responsible for what became a convenience of movement and was unique to the city of Durban. By 1904 there were over 2000 rickshas, providing transport in the city. It soon became fashionable to own your own private ricksha. Durban’s steepest roads had notices stating ‘Dangerous to Rickshaws’. Because of this, overweight people would often employ two pullers,  to assist with pulling the Ricksha uphill and downhill breaking.
Rickshas Become Popular Marketing For The City.

Durban rickshas became so popular that its imagery was used internationally by the government to lure pith helmeted travellers to the country. The uniquely South African phenomenon of elaborately decorated Ricksha pullers caught the eye of National Geographic Magazine.  At the same time, the Encyclopaedia Britannica referred to ‘Ricksha Boys’ as a Durban tourist attraction to the outside world.
The arrival of the motor car caused fierce competition for rickshas. By 1918, horse drawn rickshas had also become popular. The pullers were under the constant threat of various by-laws. Strikes occurred, as well as public petitions in support of the services, which ricksha pullers rendered. Soon there was a significant traffic problem in Durban. By 1930 the traffic situation became unbearable, with over 9000 motor vehicles and an excess of 10000 horse drawn vehicles on the city streets. Increasing numbers of trams and buses added to ricksha competition. Even so, the convenience of short journeys in and around the city centre kept rickshas somewhat popular. However, by 1940 less than 900 were left to ply the streets.

To keep the ricksha going pullers leaned on their Zulu tradition with spectacularly outrageous outfits to create interest in them. Tourists flocked to have their holiday photographs taken with them. The combination of feathers, tufts, quills, traditional beadwork and other exceptional ornamentation reached a zenith. Urban life and Zulu culture came together on common ground.

With the rise of different modes of transport pullers succumbed to the absence of their former white clientele. Rickshas became known as the poor mans taxi. Pullers abandoned the fiercely competitive scene in droves. Those who kept going provided fun rides along the beachfront to tourists. From the 1950’s, rickshas presence in the tourist trade became an enterprise in its own right. The Mandlakazi beachfront pullers adorned themselves entirely with beaded vests, skirts, aprons, belts, sheepskin anklets and other accessories, that virtually covered their entire body.
Headdresses become enormous, incorporating two to four painted ox horns each. Annual competitions for the best costume were held by the city. Today, ricksha still remain a popular tourist attraction with man going for a fun ride along the Durban beachfront with a ricksha.
*pictures and information sourced from www.ezakwantu.com