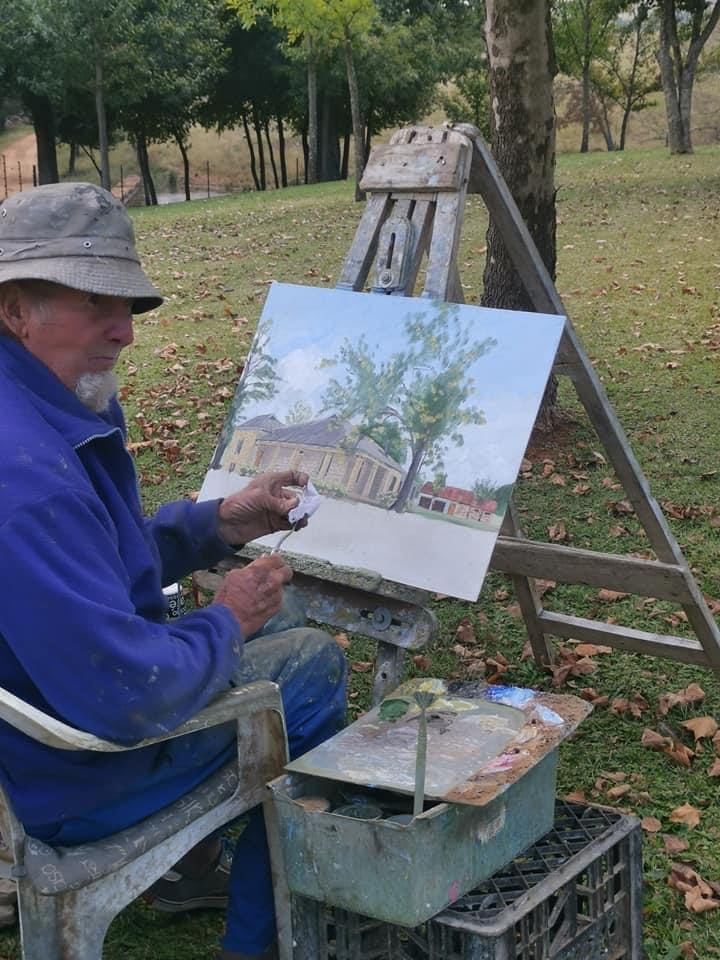 Rudolph Clench, SA’s own “artist on the move”, needs your help – and since he’s my father-in-law, you could say I need your help too. Now 78 years old, Rudolph desperately needs to undergo cataract surgery to save his eyesight. That will allow him to continue earning a living as a travelling artist so he can support his wife, who relies on his income to make ends meet.

Having spent two decades crisscrossing the length and breadth of SA in his beat-up old Jetta, earning living painting farmsteads and heritage sights, age and time have finally started to catch up with Rudolph. Since he’s my father-in-law I’m proud to say that over the last 20 years he’s become something of a South African icon.

Thinking of it now his life reads a bit like something out of a storybook.

Born into humble beginnings in Jhb on GuyFawkes in 1942, Rudolph was fortunate to train under Italian artist Carlo Sdoya in the 1950s. However, he never planned to earn a living as an artist and took lessons purely for the love of it.

In 1961, at 19, Rudolph joined Transnet as an administrator working in their test laboratories. After having only worked with Transnet for a couple of years, Rudolph was conscripted into the Military in 1963, where he completed his mandatory Military service as a field sapper. Sadly Rudolph was retrenched from Transnet in 1992, he tried his hand at construction over the years but was never really able to find full-time employment again.

Ironically, that’s where Rudolph’s life starts to become an art. Faced with limited job prospects Rudolph began travelling to rural farmsteads where he offered to paint farmers’ houses for a small sum.

As you can imagine he was often chased away but most people are good and many agreed to give him a chance.
Twenty-odd years later Rudolph estimates he has probably painted over 7,000 works, mostly of isolated farmhouses, iconic heritage sights and South Africa’s varied and beautiful landscape.

He paints mostly in oil and typically completes a painting in about three hours, charging about R900 on average for each of his works.

As a true travelling artist he sleeps where he can, often camping in remote areas or staying in accommodation provided by good Samaritans he meets along the way. He mostly travels on rural backroads and has seen parts of the country that most people will never set eyes on. His car has done over 800,000km and is now reaching the end of its lifespan.

To keep Rudolph going we are hoping to raise R100,000 of which R60,000 will go towards a reliable vehicle and R40,000 for cataract surgery. Without this money, Rudolph will be robbed of his eyesight, which would render him helpless and reliant on others for his day to day existence.

Instead of being able to document the harsh beauty of rural South Africa, thereby earning a living for himself and his family, he will be confined to the home and left unable to see. That will also prevent his wife from earning an income as she will be forced to care for him. The end result will be that both of them risk falling into poverty.

While it pains us to have to ask for money, we hope that if you are reading this you will be able to make a small contribution towards helping Rudolph continue on his journey as South Africa’s very own travelling artist.

At the very least his eyesight depends on your help.

Thank you from Rudolph and the Clench family.

I have included a link to the Back a Buddy page where people can go and donate to support him should they wish to do so. There is also a link further down to a post on Facebook that has been shared more than 3000 times.
Back a Buddy: https://www.backabuddy.co.za/rudolph-clench
Facebook: https://www.facebook.com/permalink.php?story_fbid=2892638867675590&id=100007885155851
Rudolph can also be reached on 082 530 7941 – should you wish to call him and conduct a short interview.
Thank you very much, we really appreciate it!!
Regards,
Jason