Selso The Seal Survives And Returns To South Africa 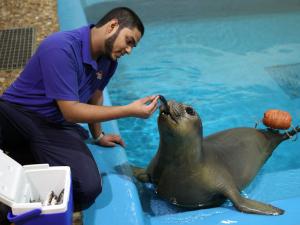 Selso The Seal, A Former Resident Of Ushaka Sea World Has Returned To South Africa From Exciting Adventures Swimming The Seas!

Selso the Seal, a former Durban resident has a fairytale story that has captured the hearts of many as he wades his way through the seas, documenting via his tracker, the life of a seal. His story starts begins in June 2013 when a a young Southern Elephant Seal (Mirounga leonina) washed up at Southbroom, KZN exhausted and starving.
In desperate need of help and some tender loving care help he was brought to uShaka Sea World rehabilitation centre and named Selso.  The unusual part of Selso’s story is that Southern Elephant Seals normally inhabit the Southern Ocean, and therefore our little friend  was a long way from home and a family.   On arrival at uShaka Marine World he weighed only 73Kgs.

Selso Being Lovingly Taken Care Of At Ushaka

After receiving some much needed love and nurturing, a much healthier Selso was released 7 months later, weighing in at a 180 Kgs.  Hitchhiking a ride on the MSC Cruise ship, Sinfonia, he was fitted with a satellite tag and let back into the ocean 25 nautical miles off Port Elizabeth. It took no more than two days once released for Selso to get his bearing and head in the right southerly direction.

His epic journey over the last 10 months took him steadily southwards to the Antarctic ice shelf then northwards again before hauling out at Cape Recife in the Eastern Cape.  Selso reached the Antarctic shelf on May 9th, 2 700 nautical miles from South Africa and continued to feed along the shelf for a week.

Selso Being Released Back Into The Ocean

On May 18th, heading north along the same track he carved going down, stopping to feed along the way.   On the 28th of June, Selso landed at Marion Island in Cape Town and rested for the day.   Researchers on the island did manage to photograph him resting amongst the other inhabitants.  After his day of rest, Selso continued a leisurely northward journey and by the end of July, was 122 nautical miles from the Eastern Cape coast.   On August 3rd, he landed 1.8nm west of Mazeppa Bay (Transkei Coast) and over the next week he came ashore every evening after dark and by daybreak had returned to sea.
He continued traveling up and down the coast feeding off the continental shelf for the next 6 weeks and came ashore on October 19th in the Titsikame Reserve.  He stayed only a day or two.  Selso is currently resting at Bayworld in Port Elizabeth under the watchful eyes of Greg Hofmeyer and the Bayworld team.
He is going to remain at Bayworld until he completes his moult which will probably take another three to four weeks. Durbanites need not worry as our little friend is in excellent care. Being fed the same diet that he was on at Ushaka, he will have a tracker re-attached to him after his moult is complete so researchers can learn more about the Southern Elephant Seal.

Some Other Happy Seals At Bayworld

We wish Selso all the best for his new adventures and look forward to finding out what he has been up to in a year or so!