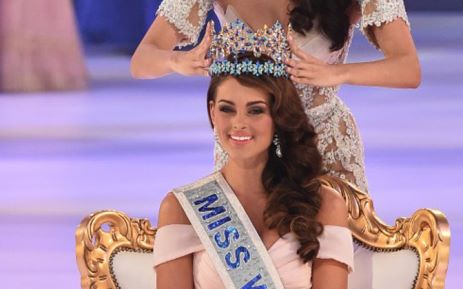 WOW!! It’s time to celebrate South Africa, our girl Rolene Strauss has won the Miss World Title in London a few minutes ago.
Miss South Africa who, is now Miss World succeeded the Philippines’ Megan Young for the title at the ExCeL Exhibition Centre in London.
The 22-year-old beauty won hearts with her background as a medical student in her native country.
“I hope Miss South Africa enjoys her year as much as I did,” said Young, who became the first bet from the Philippines to win the Miss World tiara last year.
Miss World 2014 is Miss South Africa Rolene Strauss, Miss Hungary Edina Kulcsar named runner-up, while Miss United States Elizabeth Safrit came third in the contest.

Edina Kulcsar of Hungary was runner-up, while the United States’ Elizabeth Safrit was third.
But the night was as much about Young as the new winner, with the reigning beauty queen serving as host of the event. “It’s not just a legacy for myself, but a legacy for Filipinos,” she said in a video package prior to the announcement of the winner.
She also had a piece of advice for the new Miss World: “Be ready for challenges, be ready for anything that comes your way.”
Philippines bet Valerie Weigmann failed to make it to the semifinals of the competition, ending her dream of winning back-to-back crowns for the country.
The former Eat Bulaga co-host had made it to the top 25 of the competition, but was left out of the top 10.
Weigmann had a chance to become the 11th semifinalist by winning the People’s Choice Award, which is based on fan voting. But it was Miss Thailand who ended up winning the award and catching the last bus to the semifinals.
The top five contestants in no particular order are Miss Hungary Edina Kulcsar, Miss Australia Courtney Thorpe, Miss South Africa Rolene Strauss, Miss United States Elizabeth Safrit and Miss England Carina Tyrrell.
Miss India Koyal Rana failed to make it to the top 5.
The grand finale was broadcast live in 120 countries on tonight 14 December, at ExCel London Exhibition and Convention Centre in London.

The top five contestants were selected based on their positions on the pageant’s leader board. The scoreboard ranked the top contestants based on their performances in the six competitions, which includes Top Model, Beach Fashion, Sports and Fitness, Beauty with a Purpose, Talent Competition and the World Fashion Designer Award.
The final of the 64th edition of the annual Miss World competition is being held at London, UK. A total 125 contestants from across the world have participated in the beauty pageant, but only one of them will be crowned the winner, by the reigning Miss World 2013, Megan Young of Philippines.