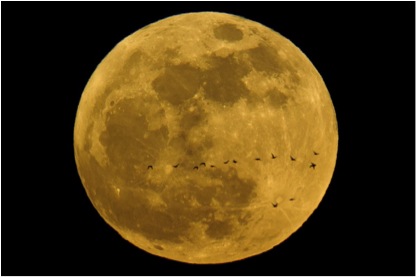 By I Love Durban
Awesome

Have you gone outside and seen the amazing Supermoon in the sky? Here are some interesting facts about this unique natural phenomenon.
1. A Supermoon Won’t Destroy Earth

Despite the claims of some people around the world, the supermoon will not destroy the Earth.
The supermoon happens when the moon is at perigee — the point in its orbit that brings it closest to Earth — and in its fullest phase.
The supermoon a normal occurrence since the moon is on an elliptical orbit, and will not make Earth’s orbit go out of whack, NASA even says so.
2. It Won’t Make You Crazy

Have no fear: The supermoon will not turn you into a lunatic.
Studies have shown that a full moon of any kind does not affect human behaviors. Full moons and supermoons do not cause more mental hospital admissions, psychiatric disturbances, homicide or other crime.
3. Not All Supermoons Are The Same

The perigee between the Earth and the moon can vary by as much as the diameter of the Earth during any given month. Although that might seem like a large number, on average, the moon is about 30 Earth diameters away from the planet.
The sun’s gravity is actually responsible for pulling the Earth and moon into a closer alignment, causing the orbital variation.
4. Winter Supermoons Are Supersized

Does the moon look larger in the winter? It should. The Earth is closest to the sun in December each year, meaning that the star’s gravity pulls the moon closer toward the planet. Because of this effect the largest supermoons happen in the winter.
5. Supermoons Change the Tides … But Not Much

A supermoon might be able to change the tides slightly, but it certainly won’t cause natural disasters, experts have said. The full phase of the moon causes higher tides, but adding a supermoon on top of it doesn’t create any significant difference.
Scientists count themselves lucky if they’re able to see any difference in tide level at all. Usually, the supermoon causes the tide to change by less than an inch, if at all.
6. Supermoons Will Get Smaller

Get your supermoon fix while you can; the moon is moving on to greener pastures. Supermoons will get smaller in the distant future because the moon is slowly propelling itself out of Earth’s orbit, moving 3.8 centimeters farther from Earth each year.
Scientists suspect that at formation, the moon started out about 14,000 miles (22,530 kilometers) from the planet, but now, it’s about about 238,900 miles (384,402 kilometers) away.
7. Supermoons Occur Each Year

A supermoon happens about once a year and is viewable from both the Northern and Southern hemispheres. So go outside tonight and enjoy the awesome supermoon right now!
Source: space.com