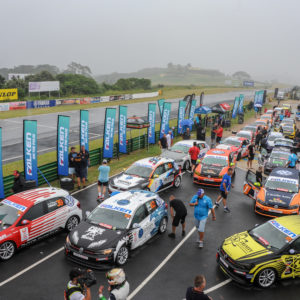 By I Love Durban
Awesome, Cars, Durban, Entertainment, Things to Do

The Falken Polo Cup series, held at Dezzi Raceway near Port Shepstone on the KwaZulu-Natal South Coast this Saturday, presented an electric day of racing. Twenty-three drivers competed on the newly modified track to secure points in the first round of the annual eight-stop tour. From aggressive bumper-car style racing down the final straight to hair raising two-wheel turns on the newly modified track, it was the youngsters who stole the show, and who extracted the most gasps and cheers from the crowds. “The average age of these Falken Polo Cup drivers is under 20, there are only five drivers older; the rest are in their teens,” said Greg Maloney, race announcer for the day.

With the top six moving up to Superpole qualifying, it was Liebenberg who came out on top, 0,707s ahead of Kruger with Jason Campos (Campos Transport Polo) in third place 0,906 s behind the leader – this sets the tone for the two races.

As the cars poured into the tight left-hander after the start, the bravest emerged at the front of the pack. It was Kruger who secured a really good launch and immediately opened up a gap on the jostling pack behind him where places changed regularly until midway through the heat when the racing began to settle a little.

In the melee, the driver making a statement was Chris Shorter (AE Polo) who weaved his way up to third behind Campos while also holding off a staunch challenge from Kriel and Liebenberg with Jonathan Mogotsi (VW Motorsport Polo) and Jurie Swart (Alpine Autohaus Polo) not all that far behind.

Shorter, who then went on to win a dramatic second heat is a former Polo Cup Champion but took a Sabbatical last year, this being his first outing in 12 months.

The second race was red-flagged three laps shy of the full complement and restarted for a true sprint to the finish. Shorter had the lead when the race was stopped and he exploded off the line at the restart to keep that lead, under intense pressure from Campos and Liebenberg; the cut and thrust of this battle getting the large crowd to its feet and cheering.

Podium went to Shorter, with Kruger in second and Liebenburg in third.

The Extreme Festival presented by Dunlop and Falken Tyres, included the Global Touring Cars (GTC) series, which was equally full of drama.

The offseason saw a couple of major changes in GTC with both former champion Michael Stephen and Gennaro Bonafede stepping aside for 2019 – in the case of the former to allow Tschops Sipuka to make a return to Terry Moss Racing.

It was his partner in the Audi team, Simon Moss who made the running in qualifying, setting a best lap of 1m 24,362s to take pole position ahead of Michael van Rooyen in the Toyota Gazoo Racing Corolla.

Moss did not waste any time stamping his authority on proceedings and blasted into an early lead, powering the Audi to victory by 2,2 s from Masters, Rowe and Wolk with Fourie a long way back in fifth place, the BMW looking worse for wear after a mid-race coming together with Van Rooyen’s Corolla.

Some frantic work by the Toyota team saw the car repaired in time for the second race where he went out and put Moss under severe pressure for the entire 10 laps, just not quite able to close the one second between them to attempt an overtake.

Daniel Rowe finished in the heat ahead of Masters and Fourie.

The combined results for the day had Moss on the top step of the podium with Masters in second place ahead of Rowe, Fourie and Van Rooyen.

Bradley Liebenberg dominated the GTC 2 class, winning overall for the day from Adrian Wood with Smallberger in third place ahead of Bob Neill (Delmon Mining Ford).

The next round of the Extreme Festival will head to Zwartkops on April 6. For more information visit extremefestival.co.za