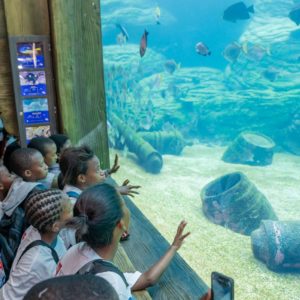 By I Love Durban
Awesome, Durban, Kids, Things to Do

It was an early start for the children who departed by bus from the Ithembalabantu Clinic in Umlazi at 07h30. The days excitement started as each child was presented with a breakfast pack, sponsored by Corner Bakery, who with over 430 stores nationwide is South Africa’s largest franchise.

On arrival at uShaka Marine World, the children visited the aquarium and then attended the dolphin show and were later treated to lunch, also sponsored by Corner Bakery. After lunch, the children braved the elements on a cold and windy day, to swim and enjoy the Wet n Wild Park.

“This is a day of true childhood joy. For the children, to just be children, free from the burdens of their daily lives,” says Larissa Klazinga, Regional Policy and Advocacy Manager, AHF South Africa. 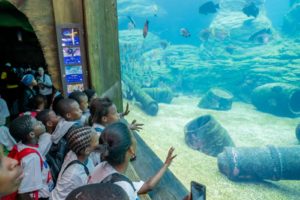 On departure the children all received a back pack which included a book sponsor by Bargain Books, toiletries, a soft toy for the smaller children and a Bluetooth speaker for the teenagers.  The girls also received sanitary towels to encourage them to attend school on a daily basis.

“While this was a day of fun, there is also an underlying campaign of awareness. HIV is a treatable disease, although very serious, you can live a very healthy and productive life with the right care and medication’ says Hilary Thulare.