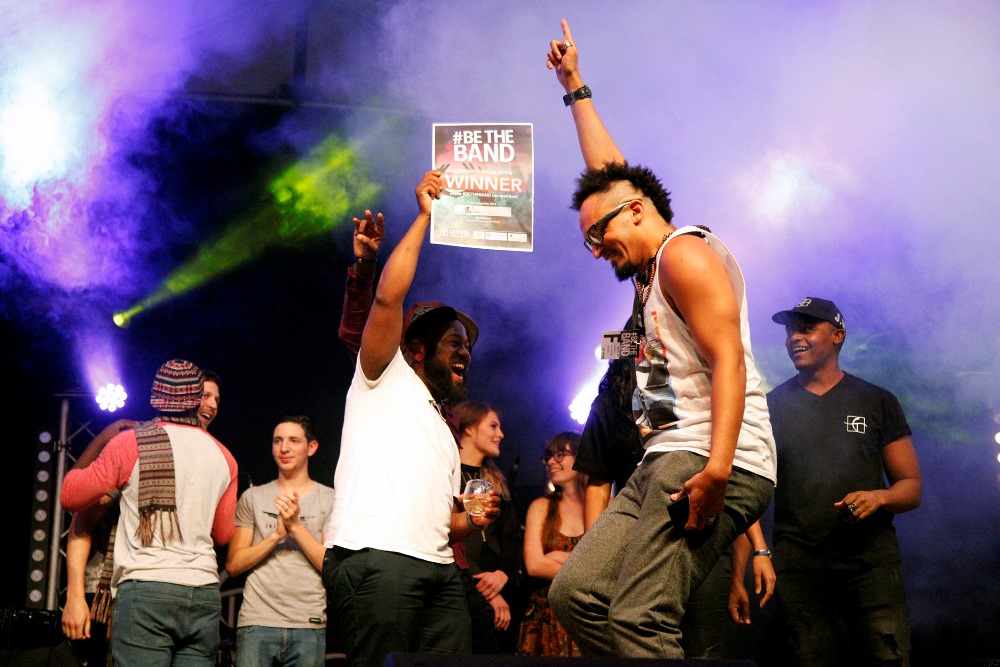 There was nothing ordinary about Sydenham group, The Audinarys, when they walked away with the #BeTheBand title, prizes valued at R80 000 and the chance to appear on the coveted Huawei Durban Day stage next month!
Dave Audinary (aka Gavin Bowden) and Aaron Fynn were one of six artists and bands who rocked The Wavehouse at Gateway Theatre of Shopping last night (24 September 2016). Displaying incredible talent, Chico Muya, Maegan Graham, Dishevelled, The Audinarys, The Gus Brown Band and Ruby Gill wowed the judging panel, East Coast Radio’s Zaba who hosted the event and local music lovers who turned to support KZN’s finest.
The judges, former Idols finalist and East Coast Radio presenter, Msizi James, Brent Quinton of Hit Record, jazz great, Natalie Rungan, and TV and radio personality, Terence Pillay, had a tough time making a final decision. In the end, The Audinary’s extraordinary performance and stage presence won the judge’s over. The neo-soul collective is well-known in local music circles for their powerful mix of house music, hip hop and RnB.
The Audinarys have walked away with prizes valued at R80 000, including a photoshoot with Pure Studios and the design of an album cover valued at R8 000, a R5 000 Gift Card from Gateway, Theatre of Shopping, music equipment and training sessions to the value of R42,000 from Musician’s Gear Zone and 40 hours of studio time valued at R25 000 from HitRecord Music & Audio Production.

“Our main goal is just to make music that people can relate to, that also has a message behind it, and most of all just have fun while listening to it,” says Dave Audinary (aka Gavin Bowden). Dave has been in the music business for the past 12 years serving as producer to many artists. He teamed up with Aaron Fynn three years ago. Both are ecstatic about taking their energy and talent to the Huawei Durban Day stage. “Being that we have been singing for three years now, the platform would be perfect for us to become a household name in Durban, and South Africa, and hopefully the world,” says Dave. “At this point in time, there’s no stopping us. With regards to the prizes, the equipment are a blessing as we don’t have much live equipment except for a guitar and keyboard. We program our drum and bassline in our productions. I think we’re ready to make Durban and South Africa proud!”
Speaking of their passion for performing and crafting music, Dave says, “Any musician will tell you that music isn’t something you choose, it chooses you. It’s the ability to speak to the heart of someone across the world that you don’t know, and yet connect with. It’s the joy of knowing that you speak for a voice that sometimes isn’t able to.”
Huawei Durban Day with East Coast Radio takes place at People’s Park, Moses Mabhida Stadium on Sunday, 23 October 2016. The Audinarys will kick off the event, setting the tone for Locnville, Kyle & Shekinah, Beatenberg, TiMO ODV, Matthew Mole, AKA, Nasty C and Freshly Ground. Tickets are R200 each at Computicket.
1 & 2: The Audinarys celebrate after being named this year’s #BeTheBand winners! The neo-soul collective from Sydenham will be the opening act for Huawei Durban Day on 23 October 2016.
3: Pietermaritzburg’s Ruby Gil on the #BeTheBand stage during the finals at Gateway Theatre of Shopping last night.
4: The Audinarys impressed the four judges with their performance during the #BeTheBand finals last night.
5: The judges, Natalie Rungan, Brent Quinton, Msizi James and Terence Pillay were faced with incredible performances by all six finalists.
6: The Gus Brown band rocking the stage at the #BeTheBand finals.
7: Dishevelled performing on the #BeTheBand stage during the finals at Gateway Theatre of Shopping.
8: Chico Muya gets the audience moving during the #BeTheBand finals.
9: 18-year old Maegan Graham was the youngest #BeTheBand finalist