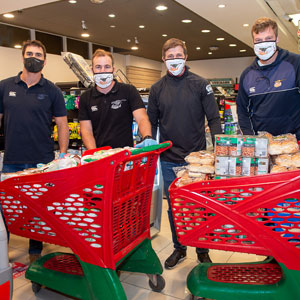 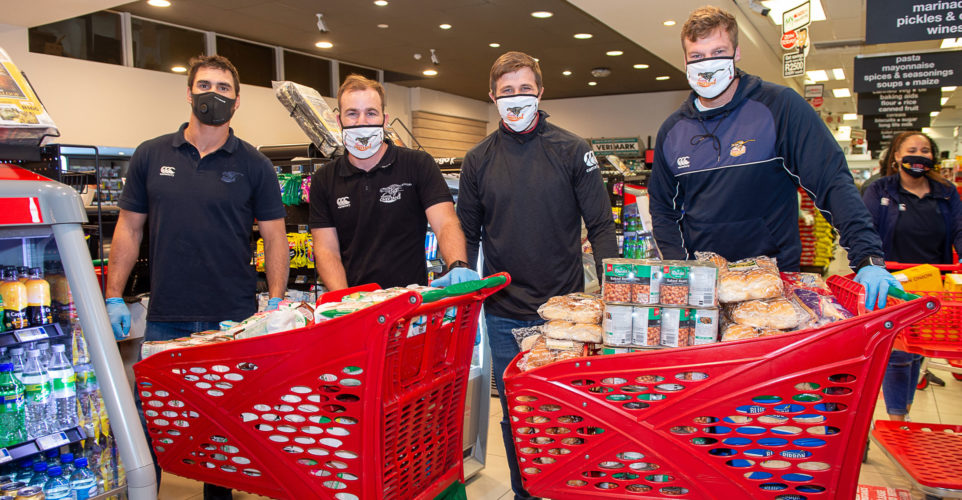 The #RugbyUnites charity campaign continues to pick up pace, as yet another South African rugby union steps up by to the challenge of packing and distributing food parcels. On Sunday, 12 July at 10h30, the South African Rugby Legends Association (SARLA) and the Sharks Rugby Union will fly the #RugbyUnites banner at SUPERSPAR, Kensington Square at 53 Adelaide Tambo Drive, Durban North.

Sponsored by Cell C and Richmark Holdings, the #RugbyUnites initiative have distributed over 1600 food parcels over the past 11 weeks to various charities around the country. SARLA President Gavin Varejes and Lions Captain Elton Jantjies along with Douglas Craigie Stevenson, Chief Executive Officer of Cell C, will be on-hand, once again, to show their support, as well as members of the Sharks Rugby team – including Sharks CEO, Dr Eduard Coetzee, and Sharks Captain, Lukhanyo Am. And finally, topping off this mammoth team effort for charity, will be a few former Dolphins players, along with current Dolphins CEO Heinrich Strydom, former cricketer Pat Symcox and SA runner, Jenna Challenor.

Douglas Craigie-Stevenson says, “It’s been amazing for Cell C to be a part of this great initiative, which has grown so quickly over a short period of just a few weeks. We have seen, first-hand, the impact that the COVID-19 pandemic has had on South African communities and initiatives like Rugby Unites are needed now, more than ever. We encourage everyone to get involved in giving back to their communities in some way.” Gavin Varejes says, “Rugby Unites is taking South Africa by storm. Last week, we had the Cheetahs take up the challenge in Langenhoven, and this week, the mighty Sharks

are pitching in. Thank you to Eduard, Lukhanyo, Doug and everyone else for making this one of our biggest team efforts for Rugby Unites to date.” Lions Captain Elton Jantjies said, “It’s been a privilege for me to see the Rugby Unites challenge being taken up by players and management in our other provinces. All acrossSouth Africa, poorer communities have been affected by the pandemic, and they really need our help. Thank you to Gavin and the Legends at SARLA for keeping this going”.

The Sharks CEO, Dr Eduard Coetzee added: “A huge thank you to the SA Rugby Legends and our valued title sponsor Cell C for inviting The Cell C Sharks to be part of this fantastic Rugby Unite initiative, which celebrates the values of family and community. In these trying times it is important that we use, not just use our collective voices, but also actively get involved in making a difference. We are looking forward to
our participation on Sunday and lending a help hand.”

All the food parcels packed by the #RugbyUnites volunteers will be distributed to the Domino Foundation , which supports KZN communities in need as well as Denis Hurley Centre who feed the homeless. To support SARLA’s ongoing charity work, visit www.backabuddy.co.za/rugby-legends-feeding-initiative . To stay up to date with news about SARLA’s continued efforts to support local communities, follow the SA Rugby Legends on