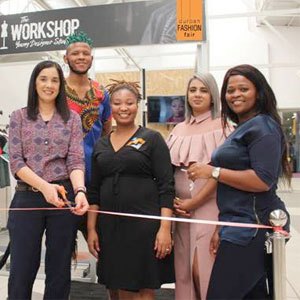 By I Love Durban
Awesome, Competition, Durban, Entertainment, Event, Fashion, Things to Do

At the end of the “one hour battle”, the overall winner was Sizwe Msomi, with Alyssa Bahadur coming in 2nd place and Nigel Zungu wrapping up the top 3.

These designers walked away with a share of R150 000 in prizes which included retail space at the shopping centre for 6 months, a professional photo shoot for their portfolio, cash as well as being included in the 2019 Durban Fashion Fair mentorship programme which also formed part of their prize package.

The Centre Manager from the Workshop Shopping Centre, Nishtha Sanichur, thanked all those that contributed in making a difference in these young entrepreneur’s lives, especially the team from the eThekwini Municipality Durban Fashion Fair. This project was certainly a triumph, from start to completion, concluding with the opening of the studio store situated on the upper level at the Centre (which is open daily for shoppers to purchase). She also added that they are excited to see what further talent will be entering the upcoming 2019 Workshop’s Young Designer’s Competition which will be announced soon.

Phumelele Gwacela on behalf of the Business Support Tourism & Markets Unit congratulated all three designers, and wished them all a successful future within our local fashion industry!

For more information contact Zola Madondo on 031 304 9894 during office hours.