Top 10 Things to Do in Durban 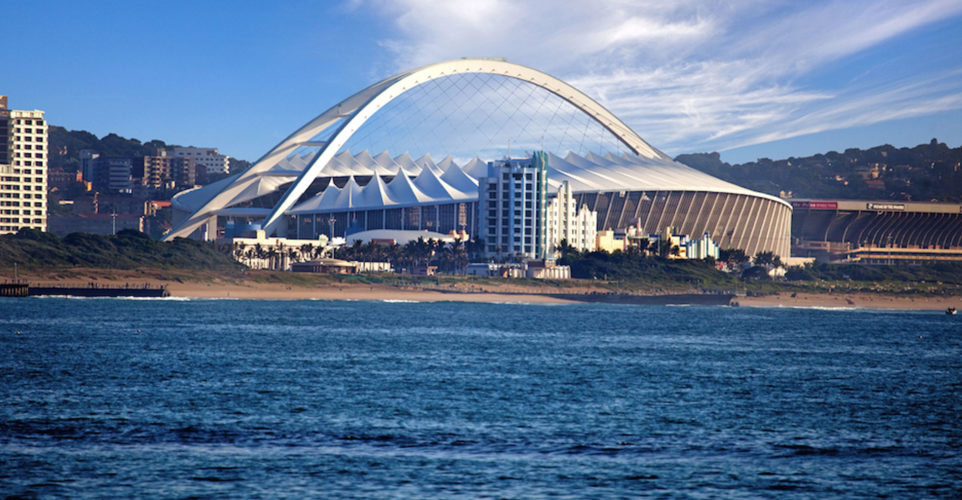 There is so much to see in and around Durban. Durban (eThekweni in Zulu) is the third-largest city in South Africa and the country’s leading holiday resort. It’s also a haven for surfers. Long beaches lapped by the warm Indian Ocean, a mild subtropical climate, and excellent infrastructure lure tourists by the millions. Durban is also an important industrial center and port, the city owes its cosmopolitan air, not so much to its visitors, but its rich ethnic diversity. Clashes between the British traders, who established a small settlement here in 1823; the Zulus, on whose tribal land Durban lies; and the Boers, all played a part in shaping Durban’s character. In 1860, contract laborers arrived from India to work on the sugar plantations, Mahatma Gandhi among them. Many remained after their contracts expired making Durban the largest population of Indians in South Africa. Today, visitors can experience Durban’s rich cultural heritage in the Zulu and Indian markets, the aroma of exotic spices, the manicured parks and gardens, and a buzzing multicultural vibe.

A good starting point for a walking tour of Durban is the “Golden Mile.” This bustling beachfront promenade is lined with high-rise hotels, entertainment complexes, shops, and restaurants. The broad, golden beaches are a magnet for water sports enthusiasts who come here to surf, swim, fish, or just bask in the sunshine. Lifeguards and shark nets protect most of the beaches year-round. Along the busy oceanfront path, pedestrians jostle with joggers, cyclists, Segways, and skateboarders, making the area feel a little like California. Other highlights along this coastal stretch include uShaka Marine World; Moses Mabhida Stadium; and Mini Town, a pint-sized replica of Durban complete with a miniature rail network, airport, and harbor scene. 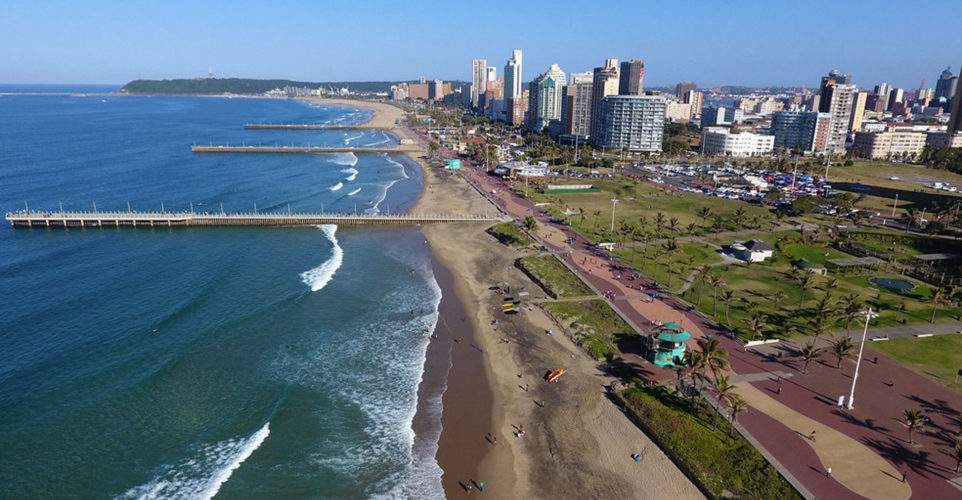 The Durban Botanic Gardens is the oldest surviving botanic garden in Africa. Set on the slopes of Berea Hill, northwest of the city center, the gardens were established in 1849 for the trial of agricultural crops. Today, visitors can stroll among the indigenous and exotic subtropical plantings, including majestic heritage trees, some of which are more than one hundred years old. The main plant collections include cycads, orchids, bromeliads, and palms, and visitors can also experience the Garden of the Senses. In addition to the rich plant biodiversity, at least fifty different species of birds are permanent residents of the gardens. Address: 70 John Zikhali Rd, Durban 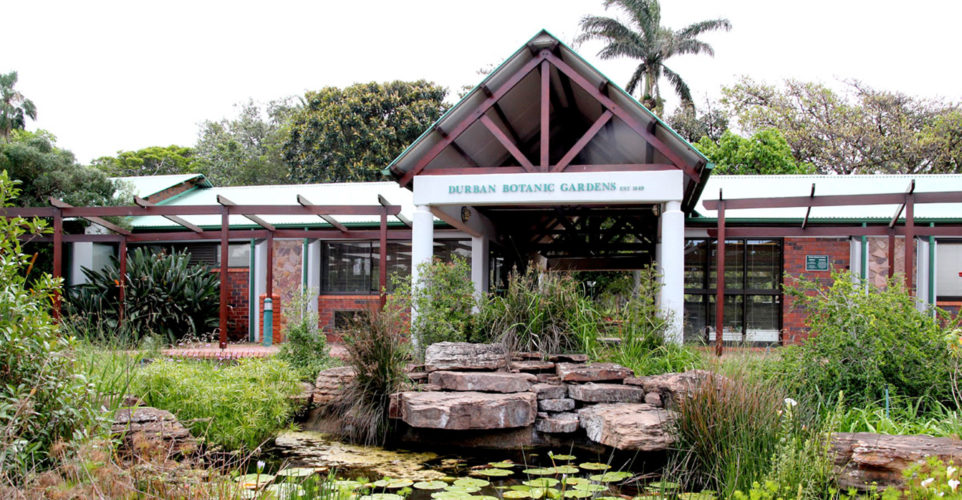 uShaka Marine World, one of the main attractions on Durban’s Golden Mile, is a water-themed wonderland packed with attractions. Sea World, set on replicas of four shipwrecks, features the largest aquarium in the southern hemisphere, where visitors can get up close to marine life through underground viewing galleries. Other attractions here include a Dolphin Stadium, Seal Stadium, and Penguin Rookery. Wet ‘n’ Wild is an extravaganza of splash pools, slides, and super tubes, while uShaka Kids’ World is a paradise for two- to twelve-year-olds. Little ones will love the playgrounds, treasure cave, and creative activities here. After a fun day enjoying all the sea-themed attractions, visitors can stroll among the outdoor shops and restaurants at Village Walk. Address: 1 King Shaka Avenue, Durban 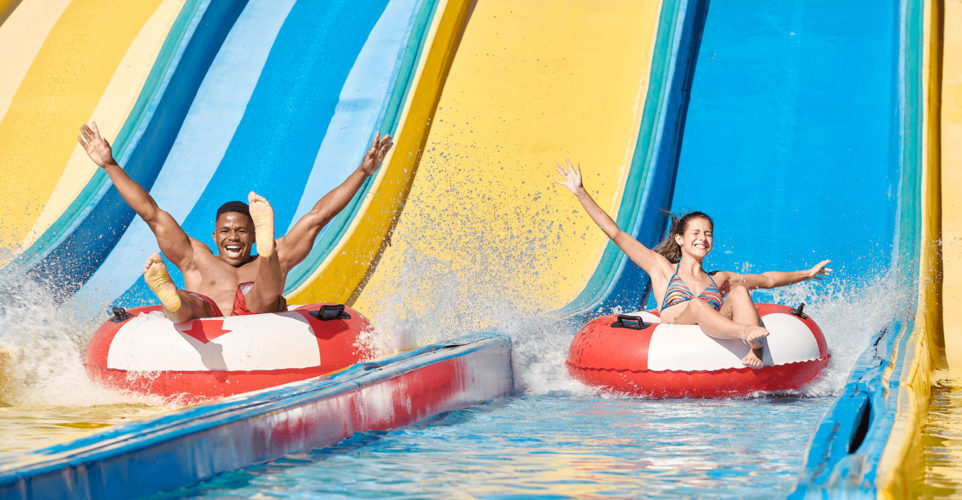 Moses Mabhida Stadium is a world-class sporting and event venue on Durban’s Golden Mile. Completed in 2009, the stadium provides a spectacular 360-degree view of Durban from the top of the stadium’s arch. The Sky Car whisks visitors to the top, or they can climb the 500 steps. Thrill-seekers will love the 220-meter Big Rush Big Swing, the world’s highest. Segway tours of the stadium are available, and visitors will also find a few restaurants on-site as well as shops selling sporting merchandise. Address: 44 Isaiah Ntshangase Rd (Walter Gilbert), Durban 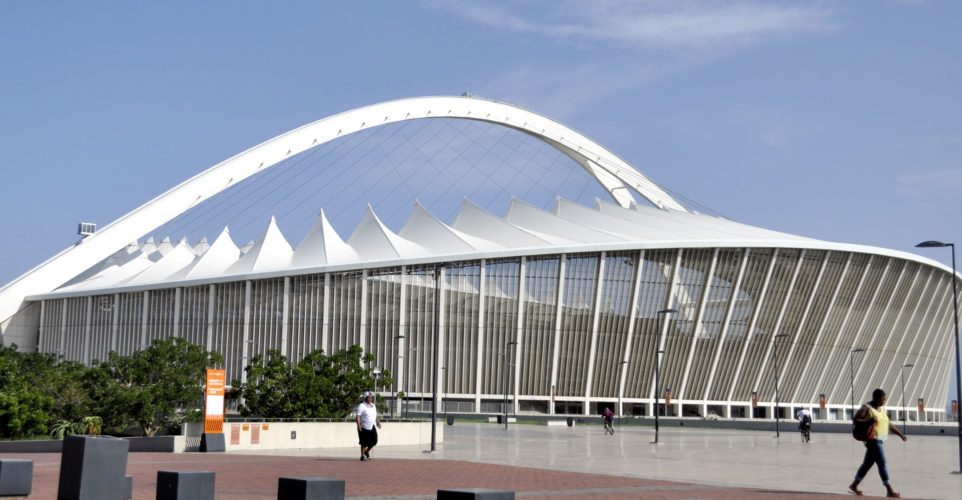 Valley of a Thousand Hills

Inland from the popular resort area of Umhlanga Rocks lies the Valley of a Thousand Hills, a beautiful region of gently rounded hills sprinkled with scenic viewpoints, villages, and gorges. The hills rise up along the banks of the Umgeni River as it flows into the Indian Ocean from the distant Drakensberg mountains. The old road between Durban and Pietermaritzburg runs along the southern edge of the valley, an area with magnificent views. After passing Hillcrest and Botha’s Hill it comes to Phe-Zulu, a typical Zulu village where visitors can see traditional dance performances and witness the rituals of witch doctors. 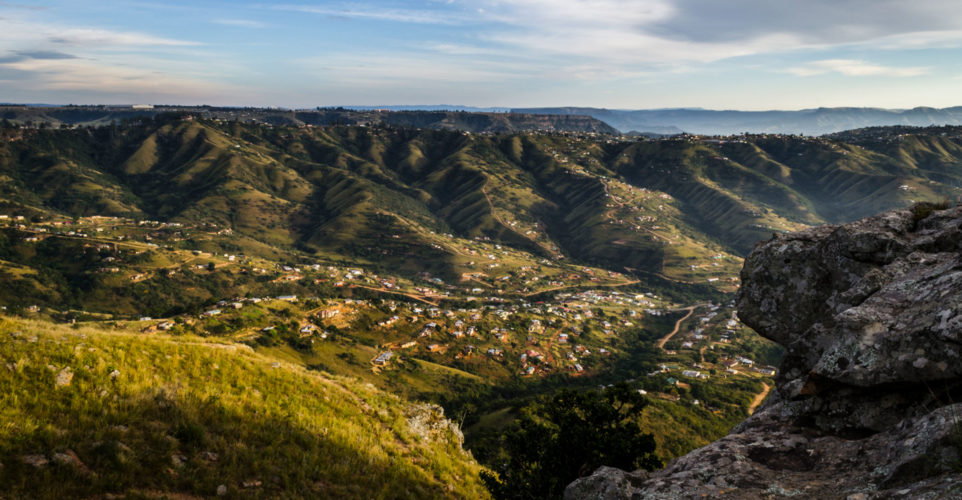 Grey Street Durban Encompassing the Victoria Street Market and Juma Masjid Mosque, the largest in the southern hemisphere, Durban’s Indian Quarter is now a multicultural mix of sights, sounds, and exotic aromas. Chinese, Pakistani, Indian, and Somali street vendors haggle along the narrow pavements, selling everything from spices and saris to beaded sandals, incense, and intricate, handmade jewelry. Savvy shoppers will find bargains here, and the restaurants boast some of the most authentic Indian cuisines in Durban. 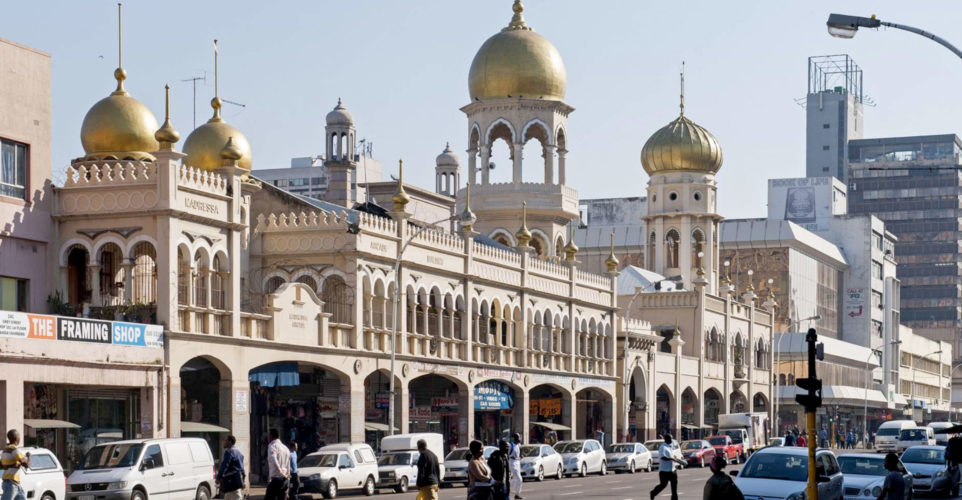 Umhlanga Rocks (pronounced Umshlanga), 16 kilometers north of Durban, is a popular, upscale resort town. Long golden beaches, interrupted by the rocky coast, stretch for 200 kilometers north of Durban to the beautiful Isimangaliso Wetland Park, a World Heritage Site. Water sports enthusiasts will find plenty to do here. Surfing, deep-sea fishing, whale watching, dolphin viewing, scuba diving, and kiteboarding are some of the aquatic pursuits on offer. Shopping is also a favorite pastime. The Gateway Theatre of Shopping here is one of the largest in the southern hemisphere. Other attractions in the region include championship golf courses, the KZN Sharks Board, nature reserves, and museums, including the former dwelling of Mahatma Gandhi. Florida Road With its warm street vibe and unique, historic architecture, spending time on Florida Road in Durban is an atmospheric experience. Home to a range of restaurants, galleries, boutiques, studios and bars, Florida Road has earned its reputation as one of the city’s trendiest streets, where people gather to shop, eat, drink, meet and hang out. Stretching from Sandile Thusi Road to Innes Road, there are dozens of carefully preserved historic buildings on Florida Road, including typical Edwardian structures that are more than 100 years old. Contrasting with the urban buzz that emanates from the street’s many restaurants and cafés, the nostalgic charm of these old buildings is another distinctive feature of this fashionable Durban street.

Many of Durban’s best-loved restaurants have a Florida Road address. Some well-known establishments are the Mexican-inspired Taco Zulu, Europa Food Emporium and House of Curries, where you can enjoy some of the authentic Indian cuisines for which Durban is famous. Vicky Christina’s, opposite Mitchell Park at the top of Florida Road, is a good spot for afternoon drinks and cocktails that turn into dinner or try Mamma’s for Italian fare. In fact, there are more than 30 restaurants to choose from in the area – to suit all tastes. 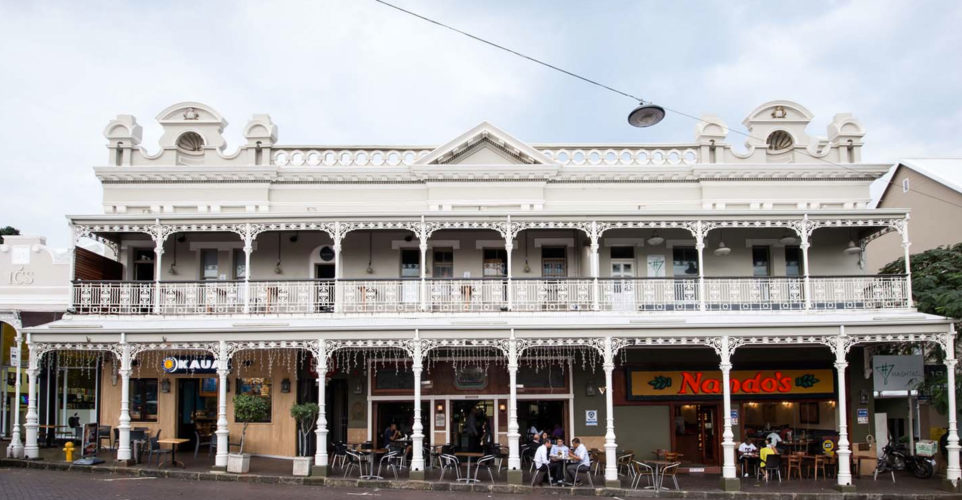 The Inanda Heritage Route takes in some of the most important, albeit little-known, historical sites of Durban. Winding its way through the Inanda Valley, it provides a snapshot of critical South African history as well as, perhaps surprisingly, India’s past. Inanda’s recent history dates back to the early 1800s when KwaZulu Natal was a Boer Republic. It was a farm then, which passed hands several times as the Boers left and the British arrived, and then when African and Indian farmers came here to farm sugar cane.

It’s this wealth of history that you can explore on the Inanda Heritage Route. The trail starts in Phoenix Settlement, established in 1904 by Gandhi. Here you can see Gandhi’s house, and his International Printing Press and Museum. Next, it moves on to the Ohlange Institute, Dube’s house – a national monument – and his grave.

A second educational institution on the trail is Inanda Seminary, the first secondary school for African girls and one of the oldest in South Africa. Finally, the route stops at Ebuhleni with a look at the elaborate rituals of the Shembe Church. Combined with a visit to the picturesque Inanda Dam nearby, this makes for a fascinating day outing. 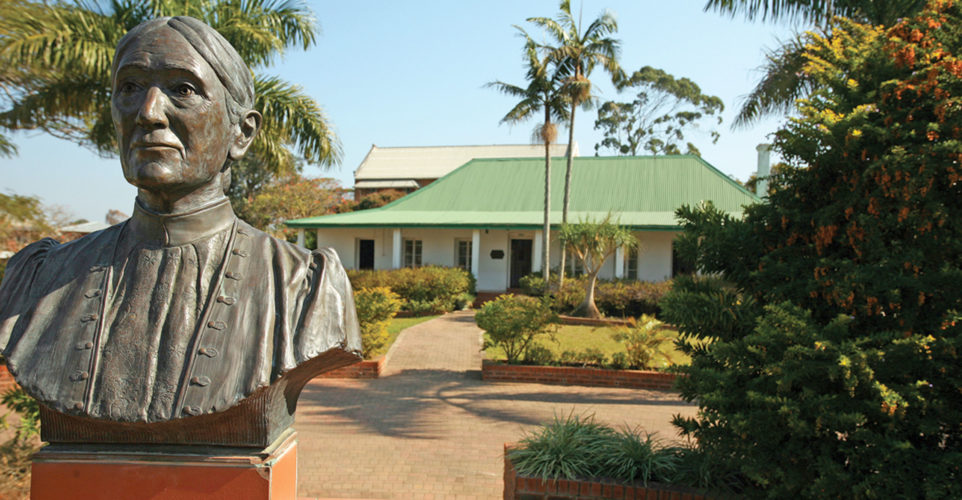 Less than 35 minutes from Durban you can enjoy a snack overlooking the extraordinary Valley of a Thousand Hills, go on a 4×4 game drive, enjoy an exhilarating live crocodile show, or marvel at a wide variety of indigenous snakes at Phezulu Snake Park. At Phezulu village, the world-famous Gasa clan has over the last 30 years, allowing visitors the opportunity to savor the taste and feel the rhythm of Africa with insights into the Zulu culture. 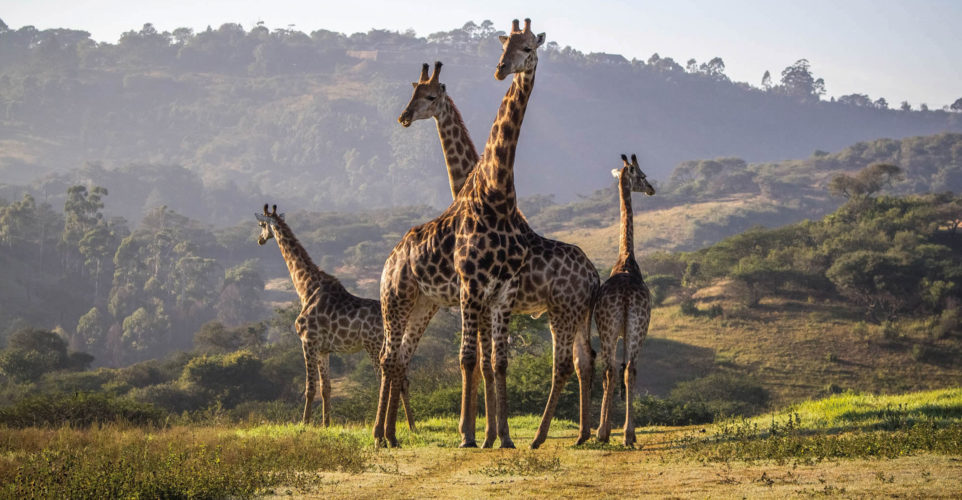