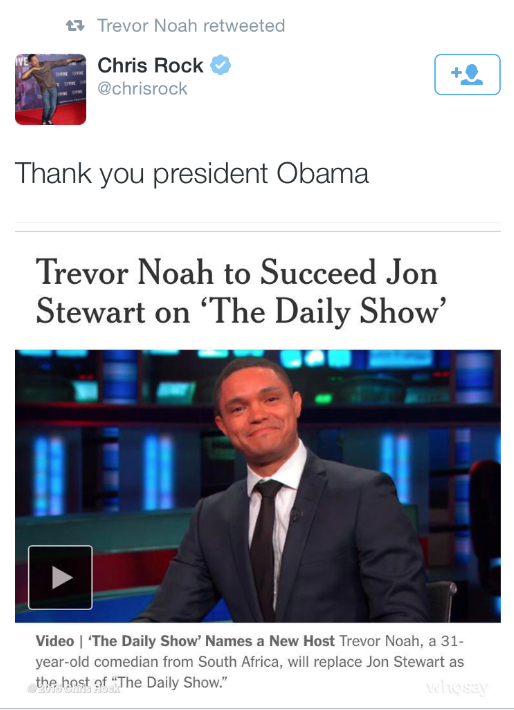 By I Love Durban
Awesome, Entertainment, History, News, Things to Do

In December last year, Trevor Noah, the 31-year-old South African comedian, made his debut as an on-air contributor on “The Daily Show With Jon Stewart.”
Now, after only three appearances on that Comedy Central show, Mr. Noah has gotten a huge and unexpected promotion. On Monday, Comedy Central will announce that Mr. Noah has been chosen as the new host of “The Daily Show,” succeeding Mr. Stewart after he steps down later this year.


The news has been met with much excitement on social media. Famous American comedian Chris Rock just tweeted “Thank you President Obama” and uploaded the pic of the New York Times article a few minutes ago.

The network’s selection of Mr. Noah comes less than two months after Mr. Stewart, 52, revealed on Feb. 10 that he was leaving “The Daily Show” after a highly successful 16-year run that transformed the show into authoritative, satirical comedy on current events. (An exact timetable for Mr. Stewart’s departure has not been decided, Comedy Central said.)
Mr. Noah, who spoke by phone from Dubai, where he is on a leg of a comedy tour, said he had been given a great opportunity, as well as a significant challenge.
“You don’t believe it for the first few hours,” Mr. Noah said of learning about his new job. “You need a stiff drink, and then unfortunately you’re in a place where you can’t really get alcohol.”
The appointment of Mr. Noah, a newcomer to American television, promises to add youthful vitality and international perspective to “The Daily Show.” It puts a nonwhite performer at the head of this flagship Comedy Central franchise, and one who comes with Mr. Stewart’s endorsement.
“I’m thrilled for the show and for Trevor,” Mr. Stewart said in a statement. “He’s a tremendous comic and talent that we’ve loved working with.” Mr. Stewart added that he “may rejoin as a correspondent just to be a part of it!!!”
But the decision also invites questions about Mr. Noah’s experience and visibility (or lack thereof), and why the network did not choose a woman to crack the all-male club of late-night television hosts.

Michele Ganeless, the Comedy Central president, said in an interview: “We talked to women. We talked to men. We found in Trevor the best person for the job.”
Ms. Ganeless added: “You don’t hope to find the next Jon Stewart – there is no next Jon Stewart. So, our goal was to find someone who brings something really exciting and new and different.”
As he joked in a 2013 comedy set on “Late Show With David Letterman,” Mr. Noah said that he did not like being introduced as a comedian from Africa, as if he represented the entire continent. “They make it sound like a guy in leopard skin’s going to come running on the stage,” he said.
Mr. Noah said in his phone interview, “I didn’t live a normal life – I grew up in a country that wasn’t normal.”
He grew up in Soweto, the son of a black Xhosa mother and a white Swiss father, whose union was illegal during the apartheid era. “My mother had to be very clandestine about who my father was,” Mr. Noah said. “He couldn’t be on my birth certificate.”
By the time he started performing stand-up in his 20s, Mr. Noah said he had long been taught that “speaking freely about anything, as a person of color, was considered treason.”
His globetrotting spirit (and ability to speak six languages) set him apart in comedy, and he performed widely in the United States between 2010 and 2012, eventually coming to Mr. Stewart’s attention about two years ago.
When Mr. Stewart announced his plans to depart “The Daily Show,” Ms. Ganeless said that Comedy Central quickly drew up “a shortlist” of possible successors “and Trevor checked off every box on that list and then some.”

“He brings such a unique worldview and a deep understanding of human nature, which makes his comedy so insightful,” she added. “He’s truly a student of the world.”
Mr. Noah gave no formal auditions for the job, outside of his performances on “The Daily Show” and elsewhere.
Mr. Noah said he expected to be criticized and second-guessed long before his first episode as host. “We live in a world where some people still say Beyoncé can’t sing,” he said. “Clearly I’m not immune to that.”
But in his conversations with Mr. Stewart, Mr. Noah said that he had found a kindred spirit in a fellow comedian who was not much further along when he came to “The Daily Show.”
“He told me, ‘I was where you were when I took over the show,’ ” Mr. Noah said. “ ‘Nobody knew me. I was just starting out, finding my voice, and that’s when I was handed this seat.’ ”
“Now,” Mr. Noah added, “it’s my turn to steer the ship.”
For those of you wanting to get a glimpse of our local worldwide celebrity, Trevor Noah will be performing at the Durban Playhouse in July.
Source: nytimes.com