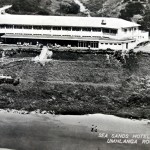 We found this incredible article written by The Ridge Online about the incredible history about Umhlanga and the North of Durban.

The area to the north of Durban, including Umhlanga Rocks, probably owed its origin to the shortage of cotton resulting from the American Civil War in the mid 19th Century. The Natal Cotton Company bought large areas of bush country for 20 cents an acre !! That amount has almost increased by a million times now.

At that time this area was devoted to arrowroot and coffee but neither of these two products nor the cotton experiment were particularly successful, despite the efforts of Jonas Bergtheil who started a plan for German immigrants based on the cultivation of cotton in the area now known as New Germany. This venture, as well as the Natal Cotton Company, was a complete disaster and the land reverted to the government.
Enter Mr John Moreland, agent for Byrne, whose famous immigration plan was put into operation at this time. People from England landed at the Point and formed convoys to the promised land where they were allocated farms. One of the immigrants lost the convoy at the Point and walked North on his own. Shortly after leaving he learnt that he had passed through the town of Durban without noticing it.

The lighthouse was built in 1952 because of the number of times that ships mistook the Umgeni River mouth for the Durban harbour, often to their cost.
The South African Railways and Harbours had sold a large area to the owners of the Oyster Box Hotel and now wanted permission to build the lighthouse on this area. The permission was refused and negotiations led to a settlement to erect the lighthouse on the beach.
The erection of the lighthouse, believe it nor not, was completed in 24 hours, apparently to prevent the structure from cracking.
The first immigrants settled and started cotton farming. Sugar was introduced and Edmund Moreland established the Natal Sugar Company at Compensation which is north of Verulam.
This was followed by the floating of Natal Sugar Estates by Sir Marshal Campbell in 1895. He sold 2 000 acres of his sugar lands for the KwaMashu township.
His son William Alfred was instrumental in founding Umhlanga Rocks as a quiet holiday resort for mill workers and friends. He built a cottage called Oyster Lodge on the present site of the Oyster Box Hotel. Nearby was a Zulu kraal of tribal head Mahakane, after whom a high-rise block of flats in Lagoon Drive is named.

The first hotel was built by Marcus McCausland in 1923 and included two old trams as annexes. This Victoria Hotel was a great success and was graced by, among others, famous Irish dramatist George Bernard Shaw. After additions the name of the hotel was changed to Umhlanga Rocks Hotel.
A boarding house called Wave Crest was built in 1931 on the site of the present Umhlanga Sands Hotel. Tom Surgeon completed the Durban View Hotel in 1935 but this was demolished to make way for Malindi. Some staff and residents were moved to Twilanga retirement home. 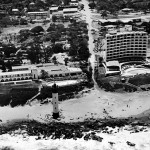