US Star in Love with Durban! 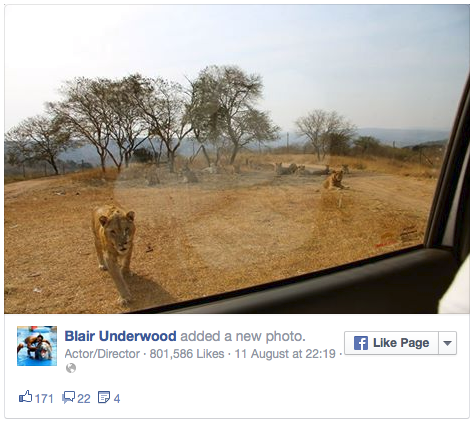 US Star in Love with Durban!

Durban was thrust into the celebrity limelight recently, when US actor, Blair Underwood, shared his love for the city during a recent vacation on Facebook and Twitter.

The actor, who is best known for his roles in television series like LA Law, Dirty Sexy Money and Law and Order, was visiting KZN to announce his role as producer and narrator for a new documentary film called Township Yogi.
The warmth of the people and the wildlife were the highlights of his trip.
“Just got back from vacation in Durban, South Africa… S. Africa is one of my favorite places to visit. The highlight is always the people first, then the wildlife,” was his first post-holiday Facebook post.

Underwood, posted photographs of lions getting up close and personal with a vehicle, and he continued: “While driving through the Natal Lion Park, three male lions decided to chase our silver vehicle! Daaaaamn. Weren’t they supposed to be sleepin’ under the tree!!!”
During the week, Underwood shared other highlights during his visit to KZN, they included playing with dolphins at Ushaka Marine World, The Mandela Capture Site, and even Midlands Meander Shopping.

However, the main highlight of the entire trip was his visit to the Nelson Mandela Capture site. He described it with images and this:
“These can be seen from the road looking like a forest of steel poles. To see the Mandela image the visitor after turning into the Mandela Capture Site, approaches from the car park along a path representing “the long walk to freedom” culminating halfway down a cut into the earth, where the laser cut steel columns gradually come together and focus at a particular point 30 meters from the sculpture.”

Looks like Durban is going to be on the Top of the List for celebrities after this!