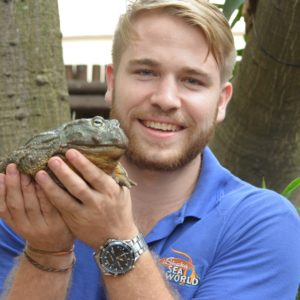 By I Love Durban
Animals, Awesome, Durban, Entertainment, Kids, Things to Do

Everyone has to kiss a frog every once in a while – and uShaka Marine World is doing just that this February!

Hop on down to your favourite marine theme park on the February 23 & amp; 24 for a close up look at our finest amphibian friends.

uShaka Marine World is hosting a frog-a-licious exhibition outside Dangerous Creatures situated with the uShaka Village Walk in celebration of Frog Awareness Day for free.

We’re into hospitality with a conscience and take our conservation mandate very seriously. That isn’t limited to just our finned friends. Frogs – which live on land and in water – are becoming more and more threatened by pollution, habitat destruction, climate change and careless behaviour from their human neighbours.

Already up to 200 species are believed to have completely disappeared since 1980 and nearly one-third of the world’s amphibians are declining – and that includes many of South Africa’s 115 froggie residents.

If you think that frogs are nothing more than slimy croaking pests, think again. They chomp pesky mosquito’s and tadpoles filter our drinking water. They’re an important part of the food chain, providing a meal for birds, fish and monkeys (and even a few French diners). They’re also considered bio-indicators –sick frogs are nature’s early warning system that something’s not right with a particular ecosystem.

So, if you’d like to find out more about how your daily actions could impact on the local frog population in either a positive or negative way, visit our exhibition.

As a special treat over this exhibition weekend, Dangerous Creatures reptile park entrance fee will be reduced from R59 to only R40 per person.  Entrance under three is free. For more information, contact uShaka Marine World on 0313288000.